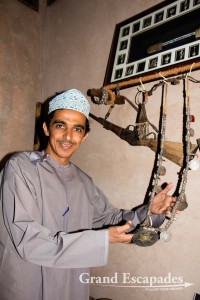 A bit overdosed by fortresses, we reluctantly turned off the road when our guidebook announced another one. What also made the decision easier: the name of this small town had a nice ring to it – Al Kamil. Strangely, we could see the fort right in front of us, but we could not find the right alley to get there… We were about to give up when suddenly a smiling face appeared from behind a beautifully carved wooden door. The enthusiastic young man was Khalfan bin Khamis bin Halais al Hashmi, the grandson of the sheik who had given the castle to the government. For the next 1½ hours, we had the most unusual, unforgettable tour of this museum.

Khalfan, a collector at heart, has made his dream come true and turned his grandfather’s old castle into a museum. He spent the last three years travelling all over Oman buying everything from old household items to weapons.

He personally took us around and explained the most outstanding items: old coins, stamps, jewelry, telephone cards or weapons that were 500 years old. One room was full of brass pots, another one displayed colorful dishes and chinaware. Scales to weigh gold and silver hang from the beautifully decorated ceilings. Even our home country, Austria, was honored: plenty of Maria Theresa Thalers, single or worked into necklaces were on display. These large silver coins have been struck in Austria since the 18th century. Until recently they were highly regarded as a currency in the Arab world.

Lots of photos and newspaper articles give testimony to the fame of Khalfan, who was even received by Sultan Qaboos. On other occasions the Sultan had sent him personal letters and sweets, he proudly told. We have kept in touch with Khalfan and highly recommend stopping for his museum that has not yet found its way into the mainstream itinerary.