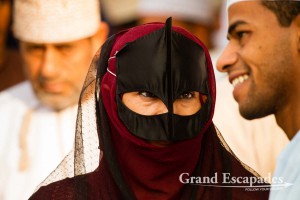 Omani Woman at the Cattle Market in Nizwa on Friday Morning, Sultanat of Oman, Arabic Peninsula

Being there early is essential! Later in the morning, carloads of tourists roam the place. Even before the selling began, the round podium in the center of the roofed-in arena was filled with men dressed in white Dishdasha, looking elegant and important. A sudden noise of shuffling feet announced the selling and the crowd of humans and animals in the circle started moving. Soon the noise increased, as the men were calling out the price and touting the qualities of the goats, which they were dragging or carrying around this base. 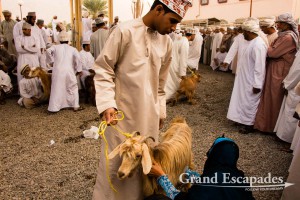 As more people arrived, the goats and their owners ended up pushing their way through a human corridor. Like most of Oman’s pubic life, this was a men’s affair, except of a small group of women wearing Burkas, small masks covering their forehead, nose and cheeks. Cool like icicles they sat in the sand and threw little pebbles after the sellers if the wanted their attention. Once an animal seemed worth a closer look, it was thoroughly inspected. Searching hands grouped their testicles, the flesh on their backs, their mouths, even their teeth, only to turn it down for the offered price. Bargaining was serious! Especially women buyers acted very dismissive towards the sellers. Eventually some goats changed owner and were tied to poles outside the arena. Some tourists came with very young children who desperately kept stroking the baby lambs, as if to comfort the doomed creature, a heart-breaking scene.

Except these rare gestures of sympathy, this is all business. Money is handed back and forth – a small goat goes for around 100 Euro, a big one for about 600. Once sold, they are thrown onto the back of a pick-up truck to find their destiny. 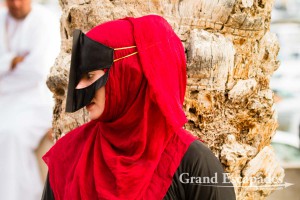 Omani Woman at the Cattle Market in Nizwa on Friday Morning, Sultanat of Oman, Arabic Peninsula