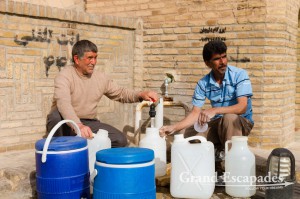 The excellent Tourist Inn and two or three places of interest make this small town a perfect stop over for tour busses on the way to Yazd. We gave the place a closer look since an Austrian friend had raved about it.

With little time at our hands, we decided to contact a free lancing guide, who was recommended in the Lonely Planet. Within 30 minutes he showed up, stuffed us in his car (two German Backpackers joined us) and off we went to Masdje–e-Iman, with 1.300 year one of the oldest mosques in Iran. Particularly interesting was the underground praying room for the hot summer months, lit by three alabaster stones in the ceiling.

Most impressive and very unique was the climb down to the ancient water mill that exhibits technical extravaganza of the highest level. It was powered by the qanat, an ancient system of little water channels that sometimes still crisscross towns, villages and the surrounding farmland providing the precious water. It demanded amazing technical refinesses to make those heavy stones of the mill move.

The remnants of an old fortification (five stories high) were another stop, before we arrived in the museum of Na’in, set around a lovely courtyard. Old farming and household equipment is on display.

This is where our really adventure started later in the day. The curator of the museum mentioned that his wife is making carpets and so do many women of his extended family. Maybe we need to mention that Na’in is famous for its carpet. We made it quite clear that due to the economic sanctions we had no access to cash, nor could we use our credit cards. Nevertheless we asked if we could come to his house after dinner to see the carpets.

And we fell in love with one masterpiece, madly! After lots eyes-rolling and regretting words on our parts, our hosts mentioned that a friend once traded a carpet for a camera. Gilles and I looked at each other, discussed this a few minutes and the deal was done. And elaborates process of writing each other certificates followed and around midnight we were the proud owners of a Na’In carpet. Back in our super comfy Tourist Inn – all rooms are two story suites – we barely could grasp what we had done…

Iran – Hospitality At The Highest Level
Yazd – Catching The Wind