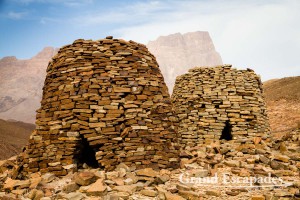 You would expect a minimum of protection for tombs built 3000 BC, in prehistory times, during the Bronze Age, wouldn’t you? Well, not even as much as a fence there was! We are talking about structures that are older than the Great Pyramids… You might also expect at least a sign, helping the clueless tourist find its way there. Well, there is simply none! We could see the tombs in the distance, neatly lined up on the ridge of a small hill, but found no access road, not even after an elderly man pointed in a direction. 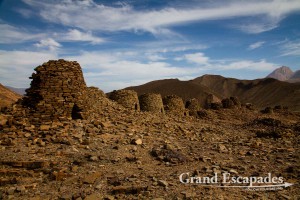 Desperate, about to give up, we took extremes measures. Heidi turned into a scout and stepped over a torn fence into a family’s backyard. On the other side of the property she found a big gate. And there it was, a track in a dried up wadi heading towards the tombs. The daring thought of driving through this private property would have never entered our minds, if it hadn’t been for a smiling Philippine family. All of a sudden their SUV slowly approached the gate and happily waving they squeezed it right through. In a cloud of dust Heidi raced back to Gilles and motioned him in. We got only a bit closer: eventually we had to walk across the wadi and climb up the hill.

It was groovy to face these ancient structures without a single soul around. Once these tombs were 8 meters high, but with the stone slabs falling off, most of them are only two to three meters high now. It was beyond our comprehension that this was not a major tourist site. Peeking into the small opening of these bee-hive shaped tombs, we tried to picture the people piling up the pieces of stones 5000 years ago. The openings are so small that they must have done so after the corpse was put there. 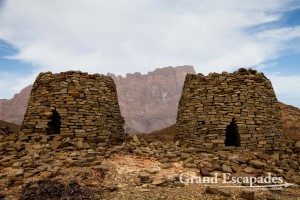 As initially hinted, finding Al Ayn was challenging. This had to do also with our decision to take a short cut through the mountains, a small dirt road without villages and people, equipped only with… a hiking map! When we finally reached a village, the area was so rural that nobody spoke any English. But even in such remote place, we finally spotted an Indian looking man who he motioned us in the right direction.