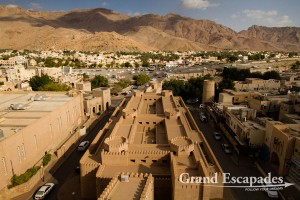 Oman is special. Where else on the Arabic Peninsula has some of the “Sinbad the Sailor” feeling survived? Besides this 1001 Nights flair, we were stunned by lush oases, ancient fortresses, sandy beaches, dramatic mountain scenery, rolling desert dunes, picturesque wadis, deep fjords and overly friendly people. All in one country!

We spent 2 weeks in Oman over X-mas 2012 & New Year 2013. Our itinerary covered Muscat (the capital), Jebel Shams & Jebel Akhdar (the mountains), Nizwa (oases, fortresses and more), the Wahiba Sands (desert), Ras Al Jinz (turtles) & last but not least Musandam (the lonely peninsula on the Strait of Hormuz). This is roughly the route we covered, with many more places in between. 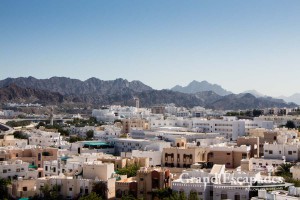 Why Travel To Oman?

Honestly, when we booked the flight to Muscat, we had no real idea what to expect… Only when we started reading travel blogs in more detail, did we find out that the 2 weeks we had would never be enough to visit all major attractions. The south with its abundance of incense trees around Salalah, we had to save for another trip. 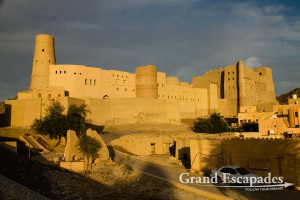 Challenges Organizing The Trip – What Would We Have Wished To Know?

Organizing a trip to Oman is actually quite easy – Guide books (especially the Bradt Guide) are excellent, answers from Guesthouses or local agencies (car rental, desert stays…) come quickly and are accurate. The only question that was difficult to answer for us was Sedan Car or 4WD (see bellow, Getting Around In Oman). 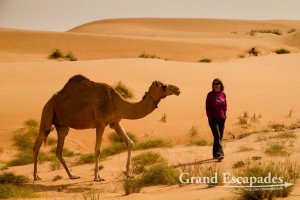 Curious encounter in the Wahiba Sands

Highlights Of The Trip

How To Go Off The Beaten Track?

What Will We Especially Remember?

What Would We Do Differently?

Is It Safe & Is It Morally Justifiable To Travel To Oman?

Some unusual politics? Oman is not only the oldest independent state in the Arab world, but also one of the more traditional countries in the Gulf region and was, until the beginning of the 1970s, one of the most isolated. In its heydays it stretched out along the East African coast and included paradise-like Zanzibar.

Sultan Qaboos bin Said Al Said is omnipresent in Oman. His portrait seems to adorn every room, public or private. So do billboards along the perfect roads built under his ruler ship. The respect and admiration he receives from his citizens is equally ever-present. Not surprising considering what he has achieved! Educated in Britain, he overthrew his overly conservative father in 1970. More or less single-handedly he then moved this country from the Middle Age to the 21st Century, turning it into a prosperous, modern state.

A transformation so deep, but nevertheless so smooth that it makes Oman stand out. The result is a unique, peaceful place in an otherwise not so stable region of this world. Maybe it helped that his subjects are only a flock of 2 millions and there is plenty of oil, although in modest quantities compared to its neighbors.

Just to give you an idea where he started off: in 1970 Oman had merely 3 kilometers of tarred road, one hospital with 12 beds, no schools. Sultan Qaboos’ father was so conservative that wearing sunglasses or playing music was forbidden. All this changed under Qaboos’ rule, but he made sure to balance the move forward with a healthy conservation of Oman’s cultural heritage. Today modern cities, excellent roads, state of the art telecommunication, excellent schools and universities (for men and women) equal western European standards. Nevertheless, none of the skyscrapers that dominate Dubai or Abu Dhabi can be found here, only elegant oriental architecture prevails. 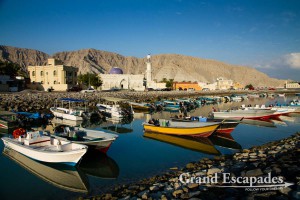 Oman’s climate is typical of the Arabic Peninsula, with blisteringly hot summers (April to September, when temperatures rise far above 40 degrees Celsius) and pleasantly mild Mediterranean winters (October until March).

Salalah is an exception, with a monsoon season, called the khareef, between June and August, with bearable temperatures.

Communication is extremely easy in Oman, with a vast majority of the people speaking perfect English.

Getting Around In Oman

There is no network of public transport, so you have to have a car. Car rentals are cheap in comparison to Europe and gasoline costs close to nothing, nevertheless this remains a significant part of the budget: 350 € per person for the 2 weeks.

Sedan or 4WD? This we asked ourselves quite a bit before we started off. Roads are excellent, so a sedan car will do for reaching most places, except crossing the Hajer Mountains, going from Nakhal to Jebel Shams. Even Wahiba Sands is doable in a sedan, since most of the agencies will pick you up for a small fee.

Visa On Arrival is readily available at Muscat International Airport or at the border crossings that are open to foreigners. Note that if you drive from Oman to Musandam through the United Arabic Emirates, you will have to buy a new visa.

Oman is the perfect (family) destination for a two to three week trip escaping the European winter. The country is really easy to travel, offers a huge variety of highlights and some of the most gentle people on this planet, but is expensive! 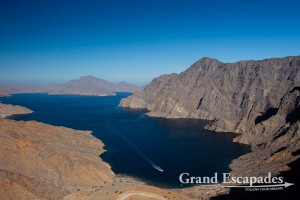 Khor as Sham, the longest Fjords of Musandam

Budget Guide To Oman
Oman – A Selection Of 36 Pictures

6 Responses to Travel Guide To Oman