Grand Escapades’ Budget Guide To Iran – Easy To Travel On A Budget!

This was a short trip (2 weeks), with a “flashpacking” to mid-range standard of travel.

As far as hotels are concerned, we chose rather budget guesthouses and hostels, except in Shiraz and Qom, where we splurged a little and enjoyed good mid-range hotels. Otherwise, we were not pinching pennies. Several times we chartered taxis, even for longer trips. This added up, but it was a confortable, relaxing trip.

Itinerary & Time Of The Visit

We spent two weeks in Iran in April 2014, and covered the cultural heartland of Iran: Shiraz, Isfahan, Na’In, Yazd, Kashan, Qom & last but not least Teheran. Due to the lack of time, we did not travel the north of the country, nor did we go to the deserts.

Without international fights and visa, we spent 740 € per person for 16 days, that means 46 € per person per day, including some souvenirs…

There is a very wide range of accommodations in Iran, from rock bottom to highest luxury. Accommodations are generally cheap, and places where we stayed were pleasant, though rooms can be really small.

Some Remarks about the Hostels…

Jolfa Hotel is nothing special, but the location in the middle of the Jolfa Quarter is simply amazing.

Khorsid Hotel was very well located, but on a major road and hence extremely noisy and overpriced.

Khayyan Hotel is cheap for Teheran, but rooms are ridiculously small and the location is simply horrible. 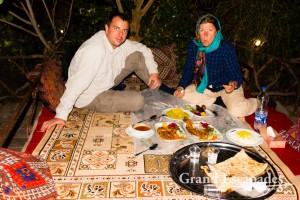 It was hard to spend 7 € per person per day on food, although mostly we ate at touristy places. The local restaurants we dropped in were usually inexpensive eateries. Only once did we have dinner in a fancy local restaurant in Qom, recommended by our taxi driver. The absence of alcohol also helped to keep costs down.

Transport is incredibly cheap, and really efficient in Iran. All in all we spent 6,5 € per person per day on transports, even though we took a plane from Teheran to Shiraz, which was 35 €… Buses and Trains are extremely cheap – for example Yazd to Kashan by train, a 390km ride, was less 5 €. From Qom to Teheran, 130km, we traveled by taxi for 25€. So even such extravaganzas won’t have a large impact on your budget. 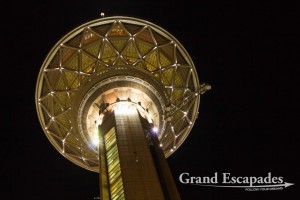 THAT will be a big chunk of your budget! Admission fees to museums, mosques, tombs or even gardens are high, and there are very few sights where you do not have to pay. Quite often we have to rent a taxi for the whole day to reach places that were outside of the city we stayed in (Persepolis, Abyaneh, Meybod & Khoronaq, Zein – O – Din) and those journeys were not that cheap.

For those side trips and for entry fees, we spent in total 12 € per person per day which is almost as much as we spent on hotels and a quarter of the total budget. 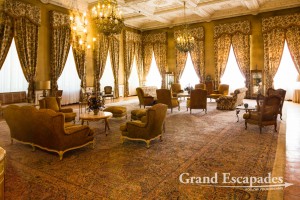 Chartering Taxis is a great way to increase your comfort and remains very reasonable. We did it both for the leg Kashan to Qom & Qom to Teheran and had very relaxing trips.

Probably the most efficient way to cut costs is to try to find fellow travelers for tours, like going to Meybod & Khoranaq from Yazd, or to Abyaneh from Kashan. These expenses were a large chunk of our budget.

Try CouchSurfing, both for the cultural experience and the financial aspect. We plan to do so too in the future, more clearly for one reason: to meet locals.

Meeting The Locals in Iran
Travel Guide To Iran

2 Responses to Budget Guide To Iran