We arrived late at night by train from Buchara, it was raining, we could not find a place to stay and a restaurant was nowhere in sight. Not a great start for what became my favorite place in Uzbekistan. All these obstacles could not stop me from checking out the gigantic Registan that very evening. True magic hit:  the large square surrounded by three gigantic madrassas was bathed in a light show that made me forget the rain, the cold, wet feet and I knew that very moment that this was my favorite place in Uzbekistan.

Registan is a big plaza surrounded by three magnificent madrasahs.

Ulug Bek Madrasah is the oldest one. It is named after Ulugh Bek, an excellent scientist and successful ruler. He was the grandson of the famous Timur, whose empire. This is where I spent most of my time. The courtyard inside invites to stroll around, the former cells where students lived are now souvenir stalls and the best view of the entire complex is from one the balconies on the first floor. 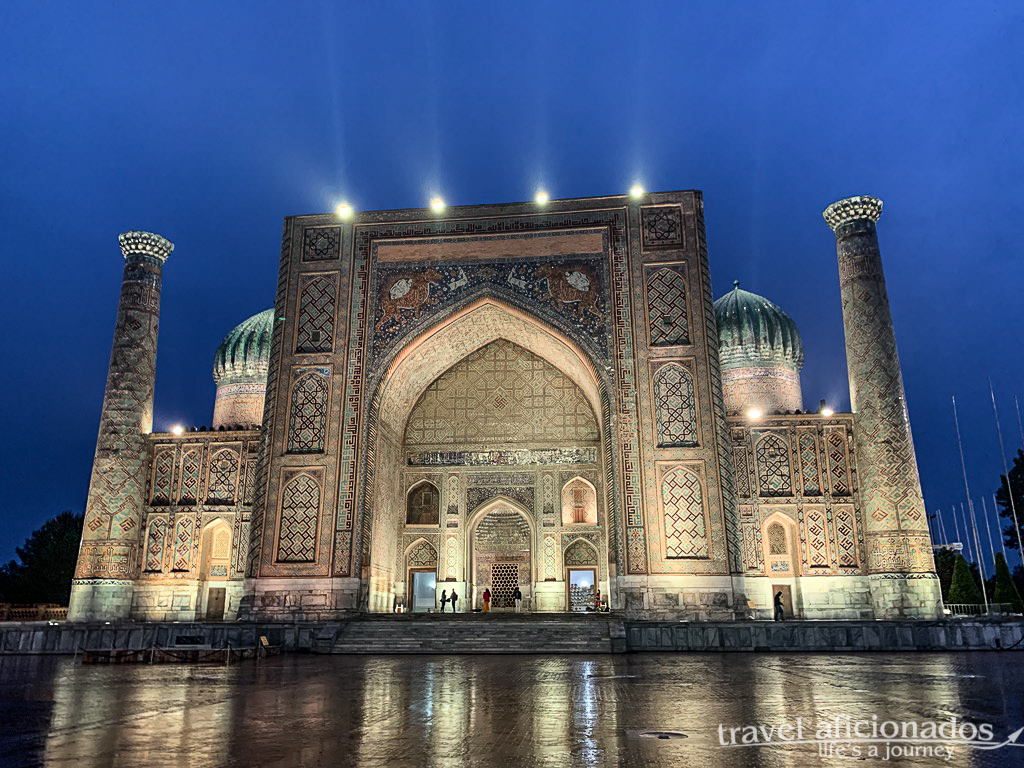 Shirdor Madrasah, built in the 17th century is on the east side of Registon square and  repeats the facade and structure of Ulug Bek madrasah opposite.

The first night we spent in a B&B run by a family. The room was cold, whereas the breakfast room was steaming hot and the scene almost grotesque. It reminded of the movie the Big Feast. The large table was cramped with incredible amounts food and Russian tourists. We squeezed in and decided to move on to the nearby Asia Hotel. A typical Soviet style place, but warm and comfy. 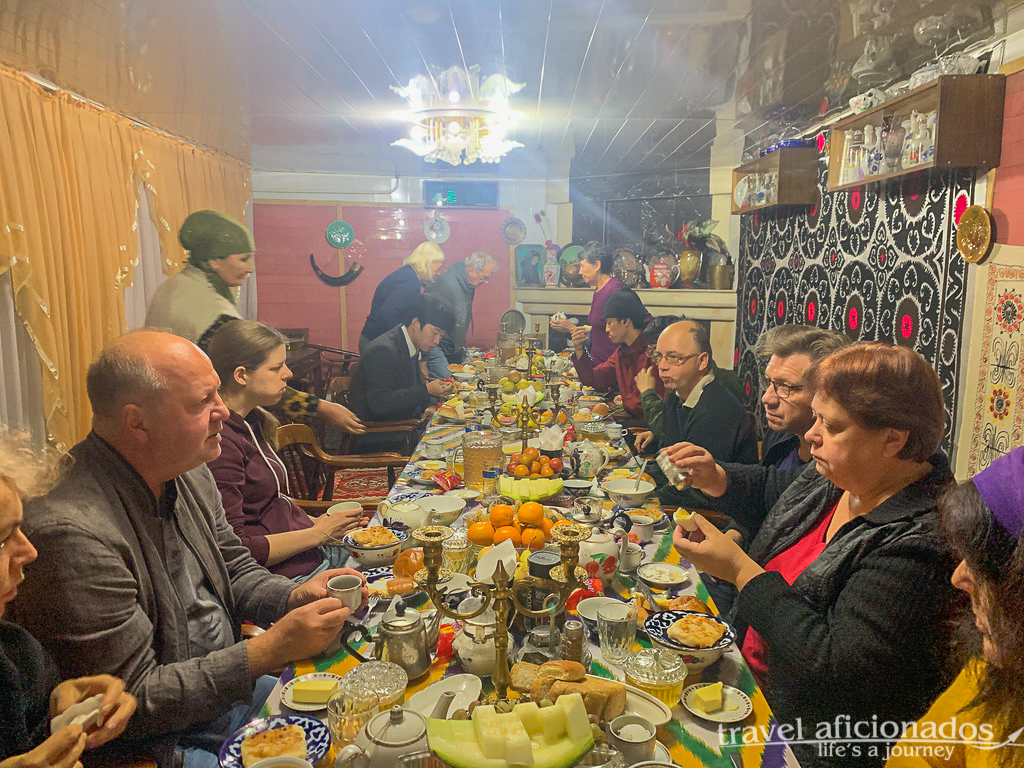 Breakfast room of our hostel 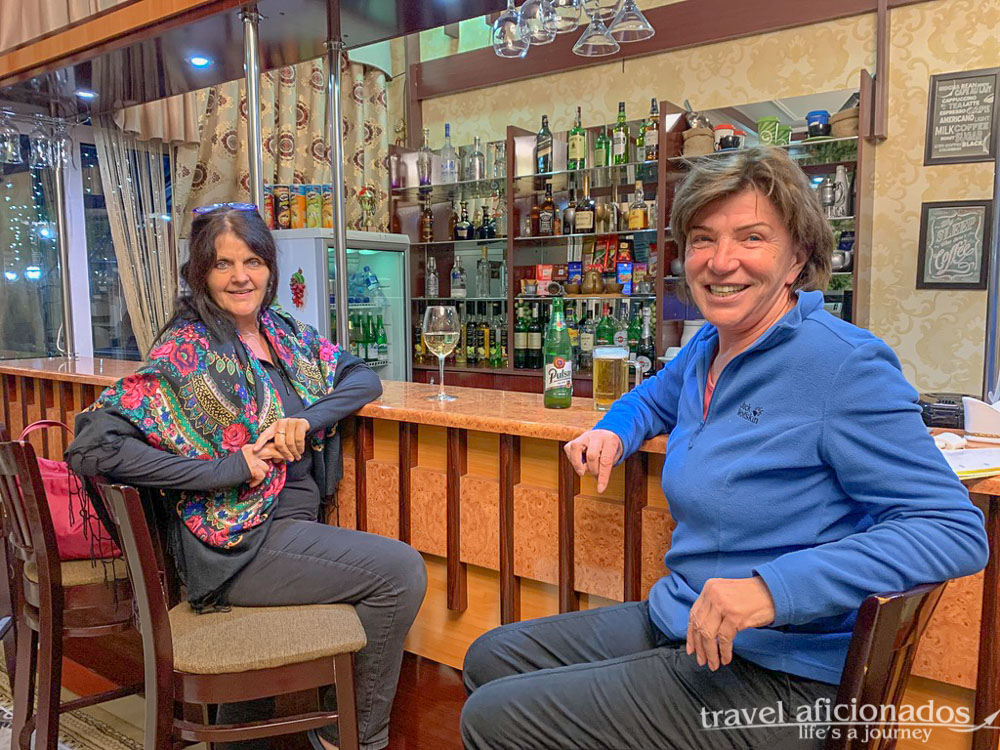 Thanks s to our guide Olga (a friend of our guide in Buchara) we never had to use a taxi and walked to all sights even those a bit away from Registan. Olgar’s life was quite interesting itself, her mother was Korean and her father from Russia’s far east, so she had quite some stories to tell. 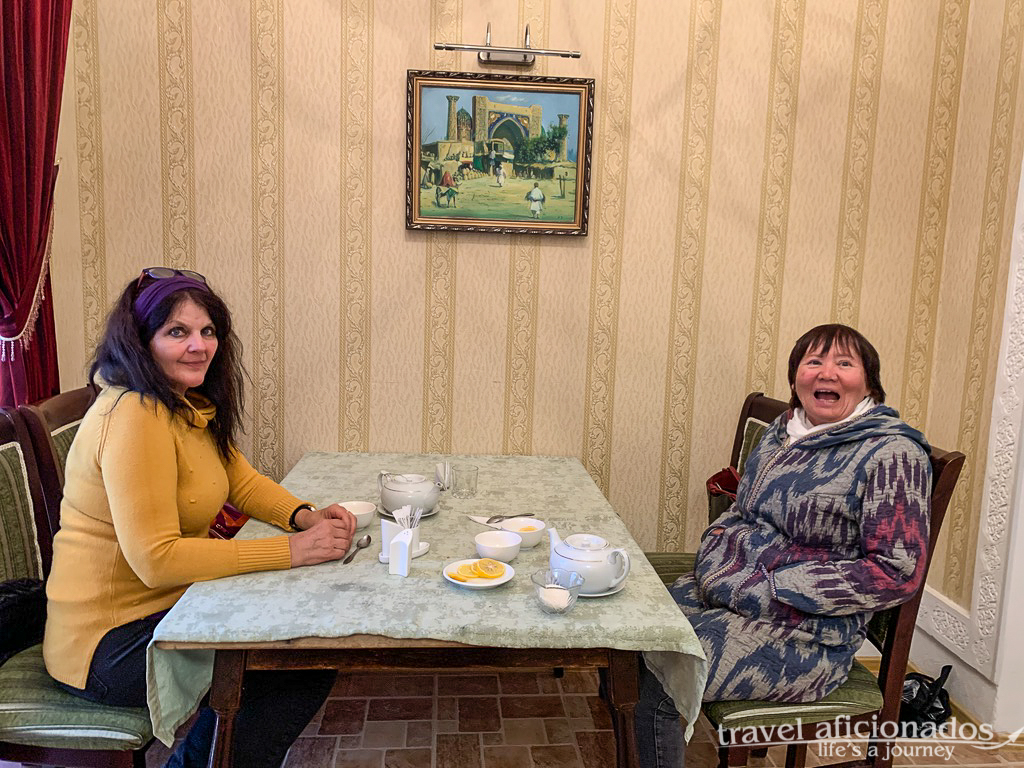 Claudia and our guide Olga

Gur Emir Mausoleum is where Timur and many members of his family are buried. Timur’ empire was gigantic, it stretched from what is now Turkey to Delphi. The tomb, built in the 14th and 15th century, was in really bad condition before it was renovated during Soviet times. In 1941 the tomb was opened to examine the body: Timur was rather short, lame and obviously did not died of a natural death. 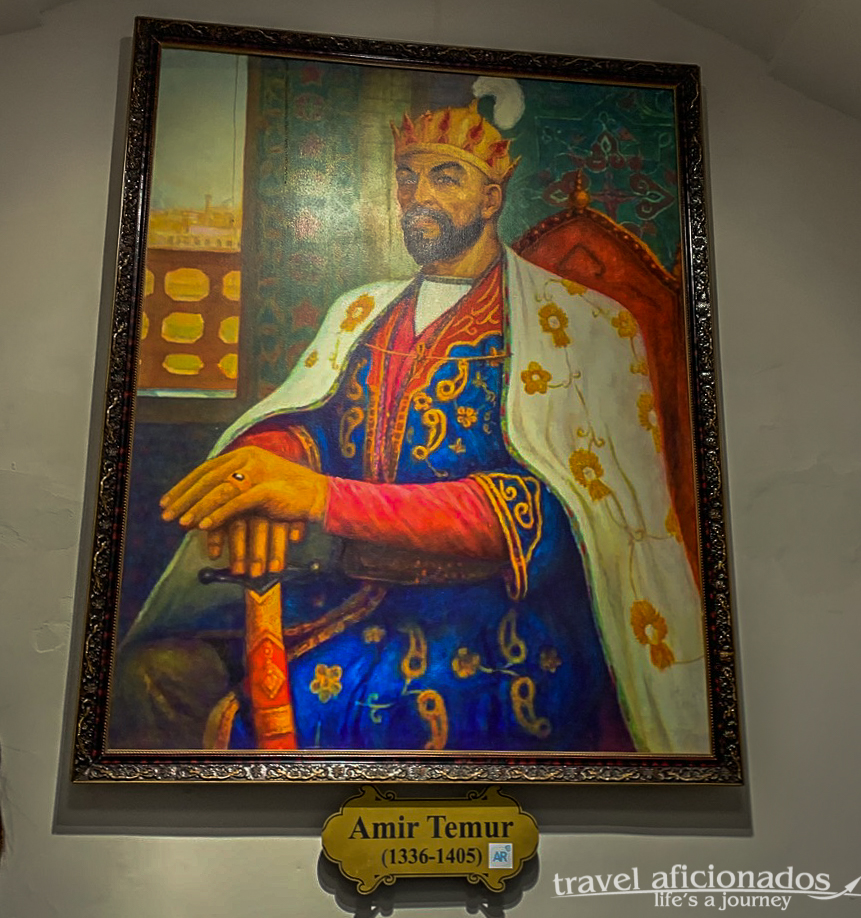 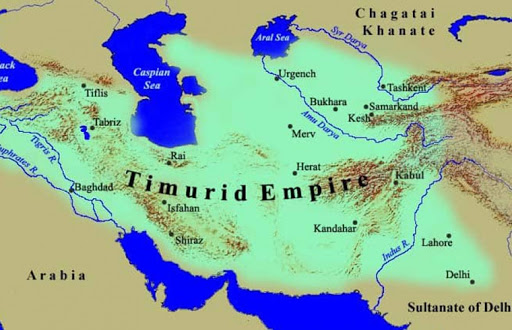 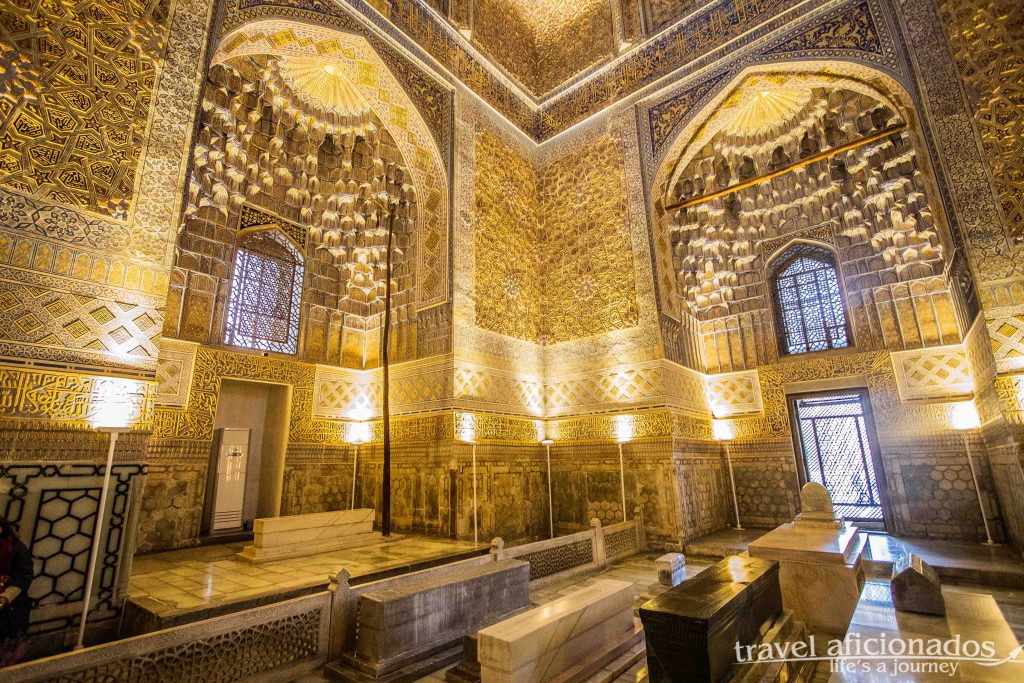 Walking around with Olga led us to all kinds of exciting places, the big market in Samarkand was one. Fruits and vegetables in abandunce, fresh from the fields. 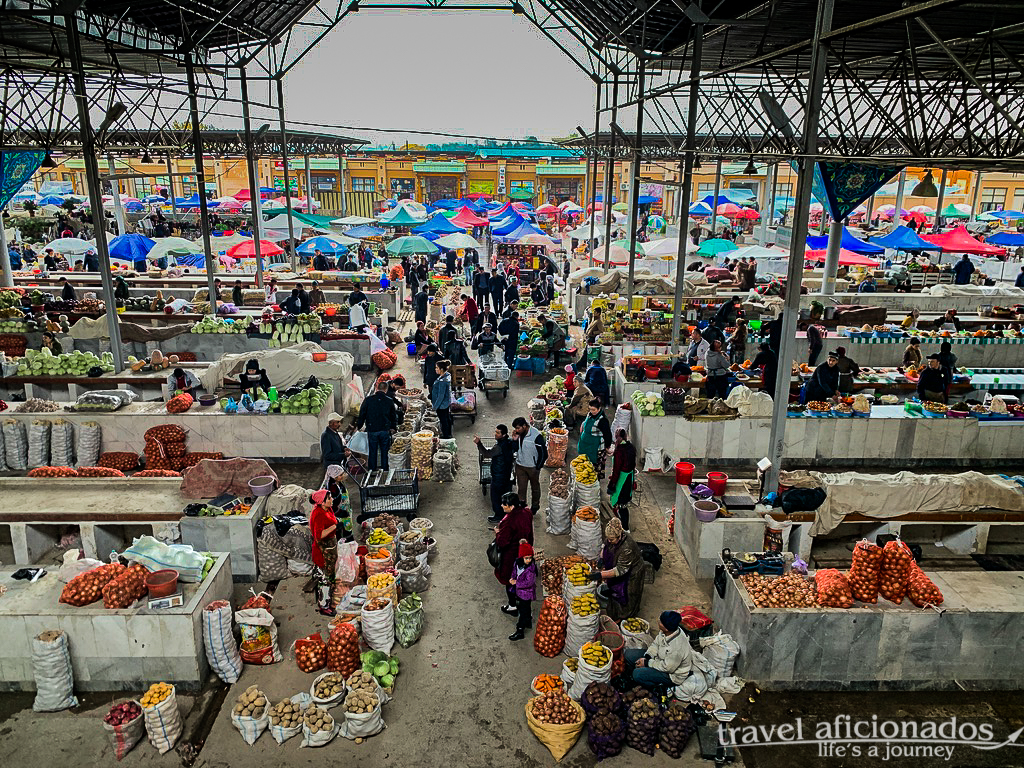 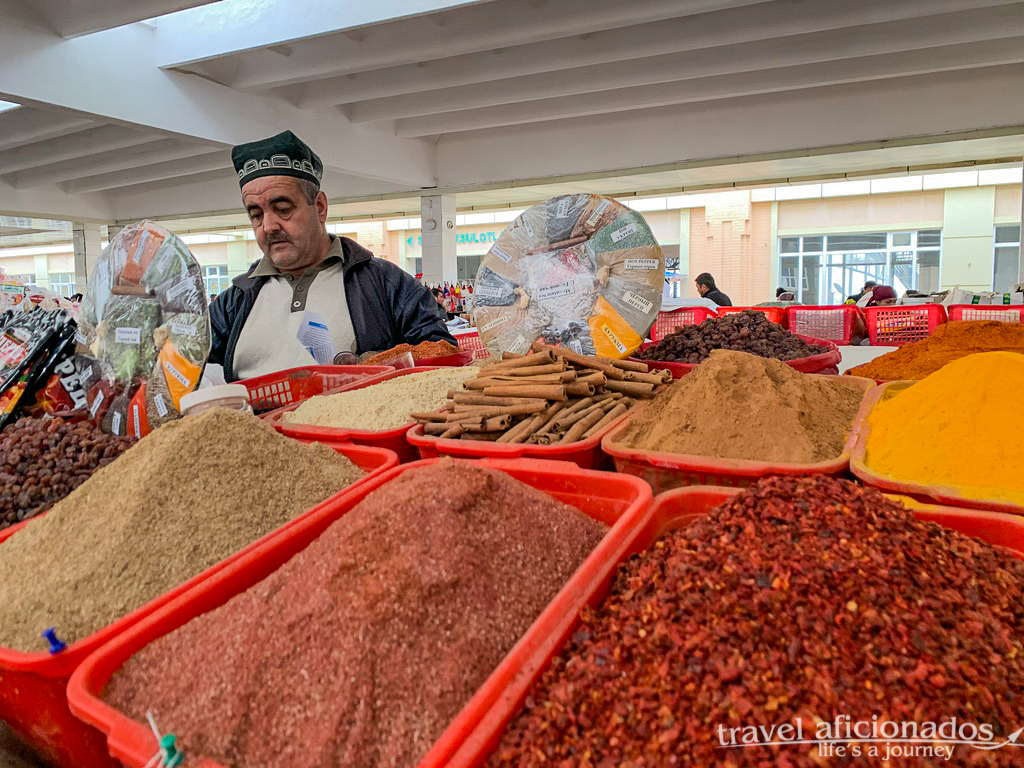 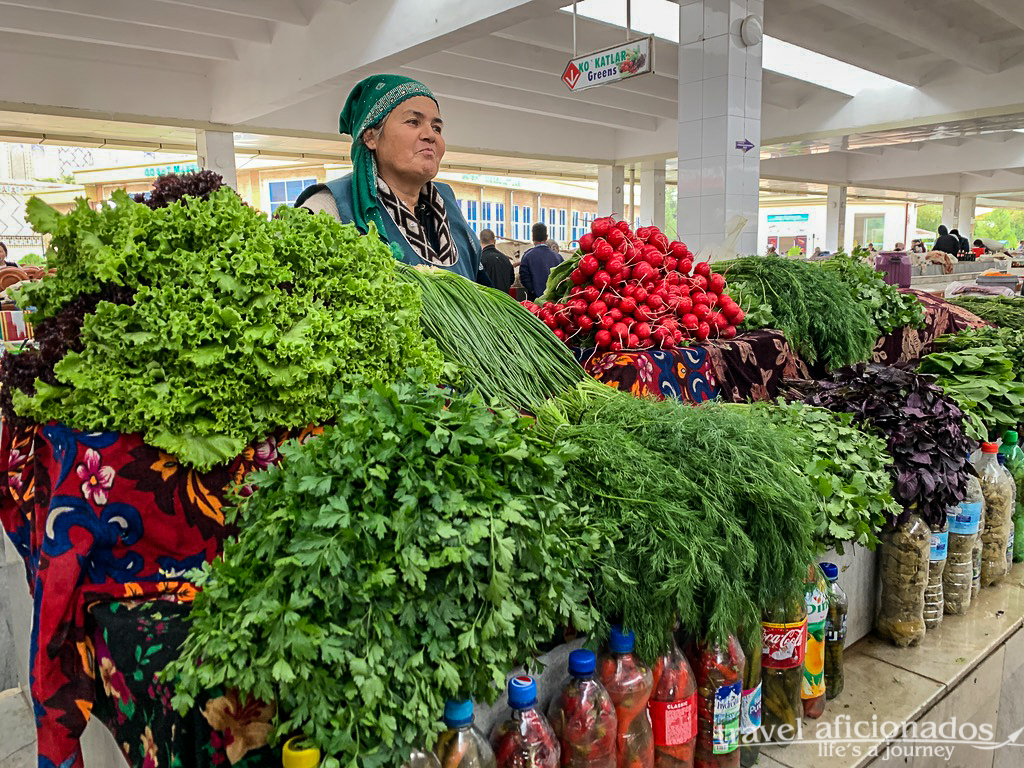 And sometimes we walked right on the very Silk Road, 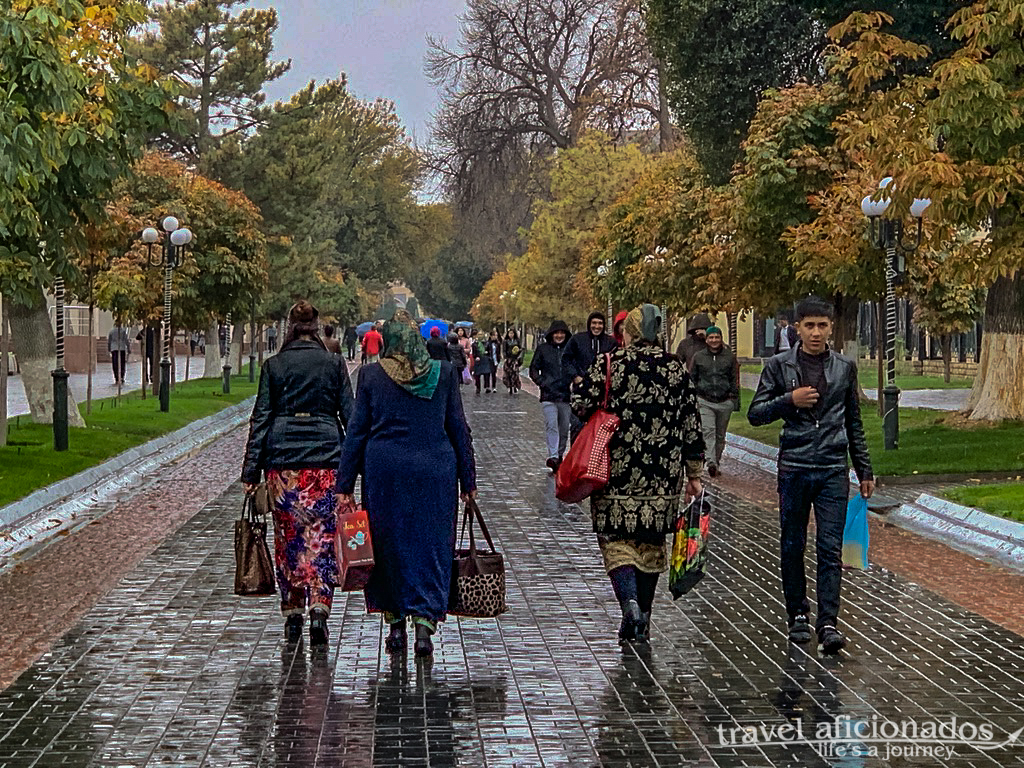 Walking on the very Silk Road

Bibi-Khanym Mosque was dedicated and named after the wife of Timur. In the 15th century it was one of the largest and most magnificent mosques in the Islamic world. The best architects, painters and builders were brought to Samarkand and constructed it in only five years (1399-1404). This rush and Timur’s ambitious plans were simply too much for the construction techniques of this time. Soon after it was completed, parts of it collapsed already. I discovered photos taken in 1920 and never would I have guessed that it was the same building. Even today, only parts have been reconstructed in the old glamour. And there is the cheesy legend of how a hot kiss of the architect left a stain on Bibi’s cheek. When Timur returned from his battle, he had the architect killed and buried in the cellar of the mausoleum. 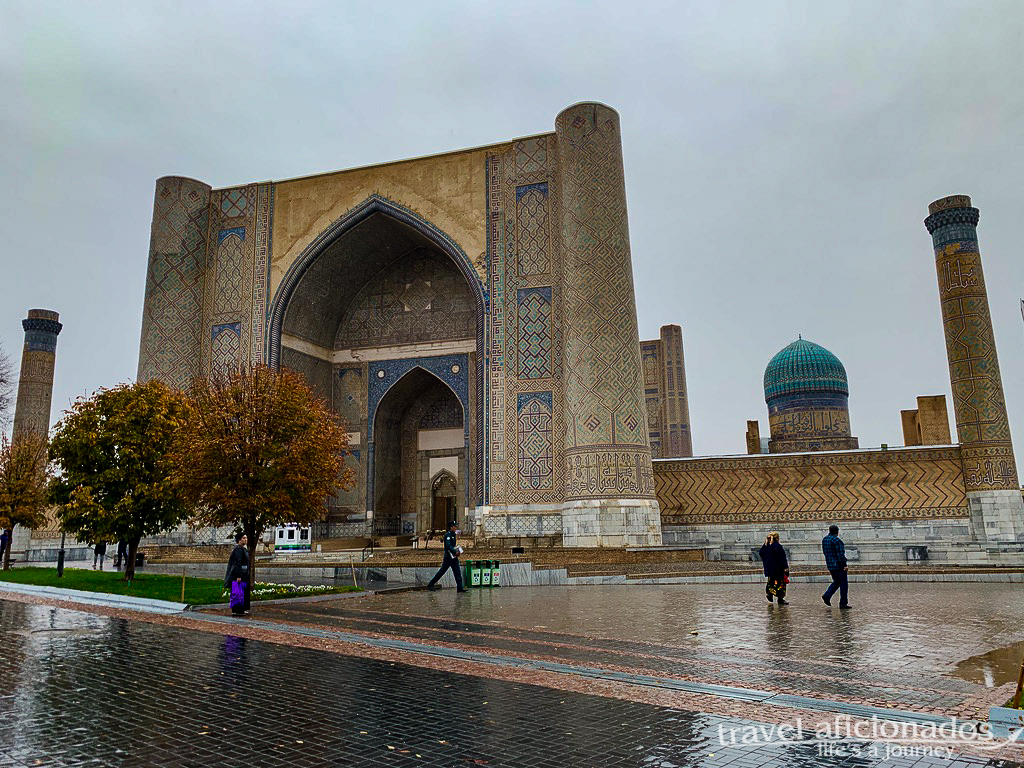 Bibi-Khanym Mosque, she was the wife of Timur 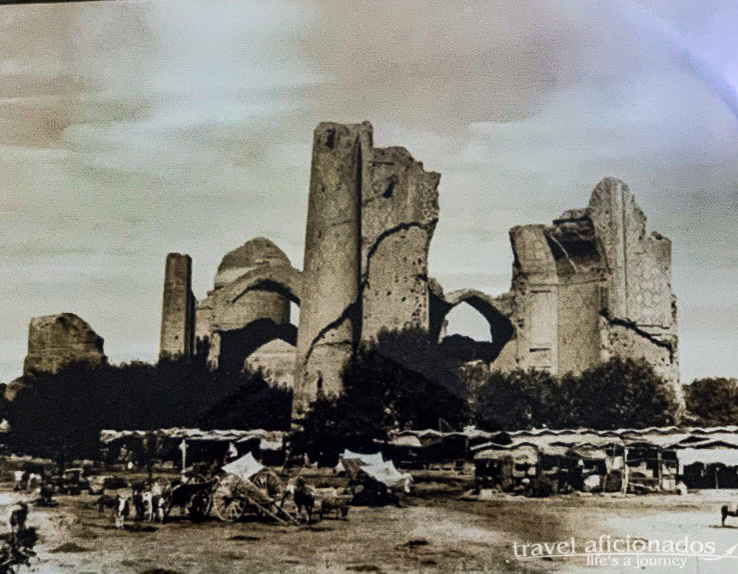 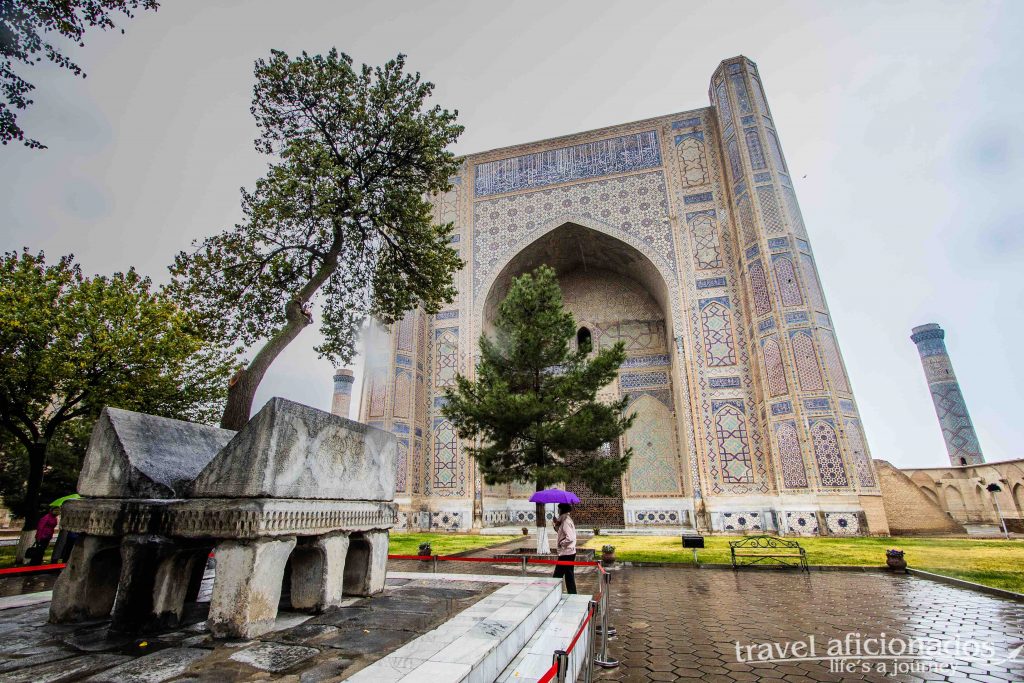 Not far from Bibi Khanym is Shakhi-Zinda, the burial place of royal persons and nobles built  in 1370-1449 up on a little Hill. When climbing the steep stairs Olga asked me to count them when going up and down, if you get the same numbers it means good luck. Needless to say, I forget what I counted going up. What makes this city of 44 tombs so unique is the size, the set up and colors. The mausoleums are arranged along narrow streets, a maze of blue glazed tiles. 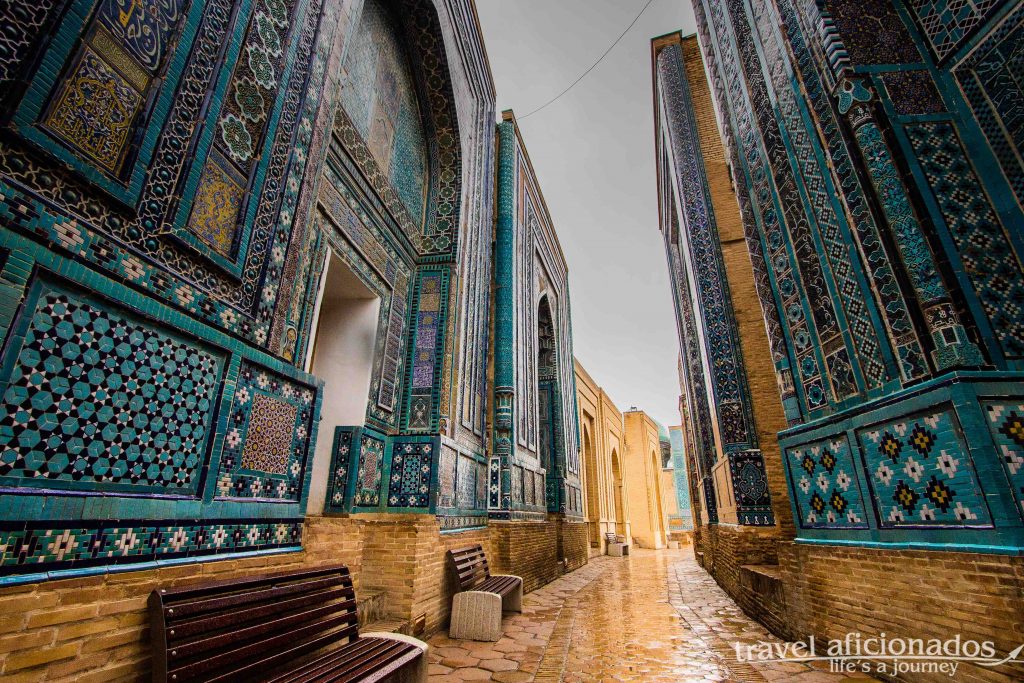 I also found historic photos of the complex, they showed the Decay but it was not as bad as Bibi Khanym. It was only renovated in 2005. 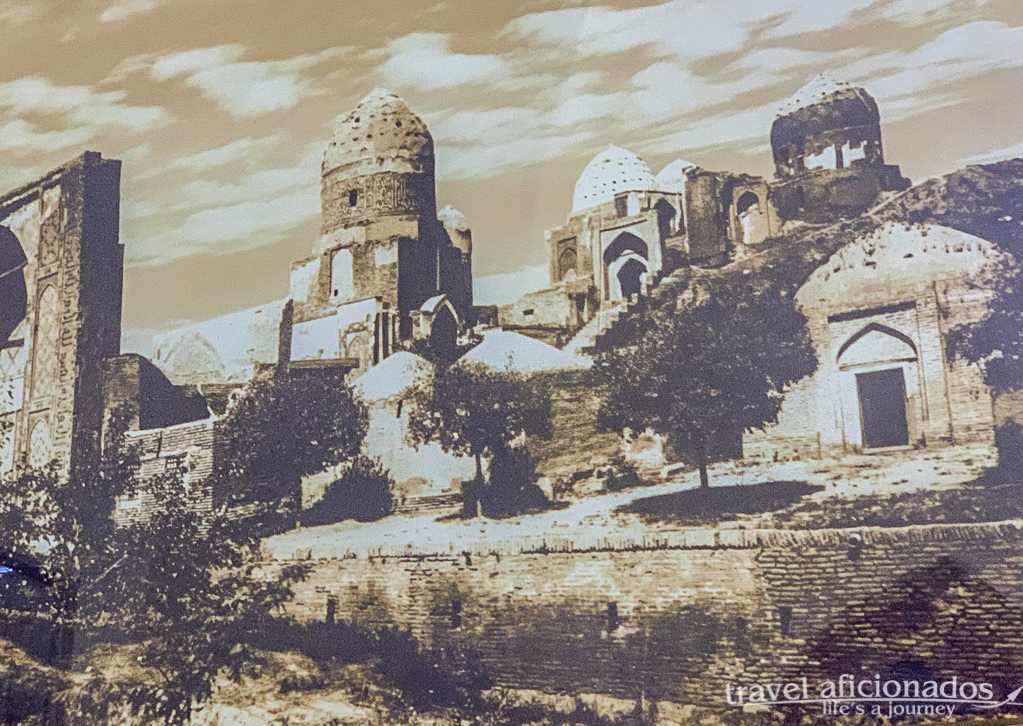 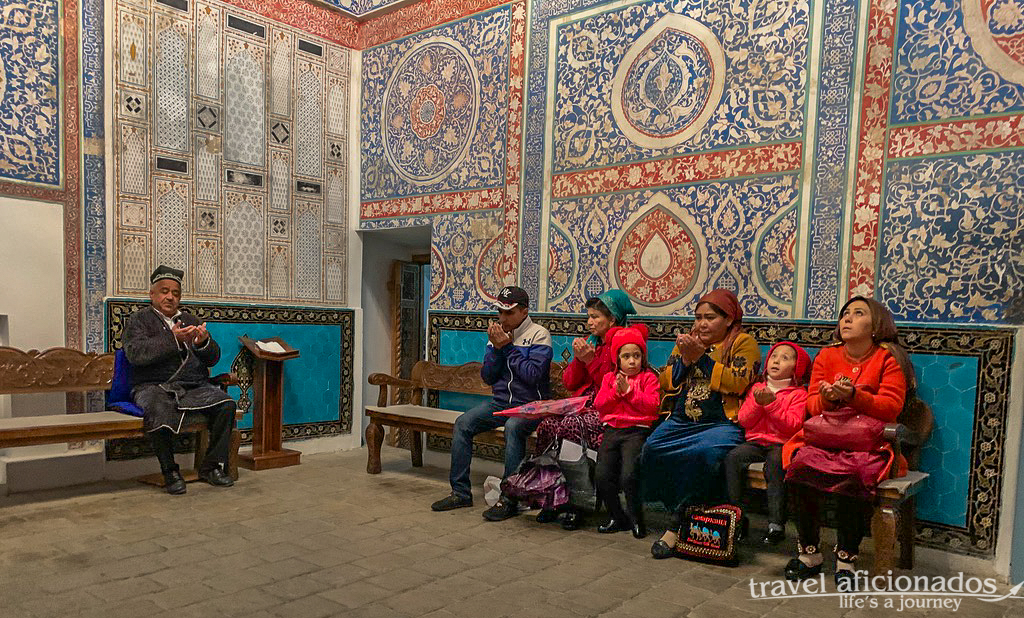 After seeing the major sights of Samarkand I kept coming back to Registan, especially to Ulug Bek Madrasah. The inside simply mesmorized me, the delicate architecture,  the tranquility, it is a very special place on earth. 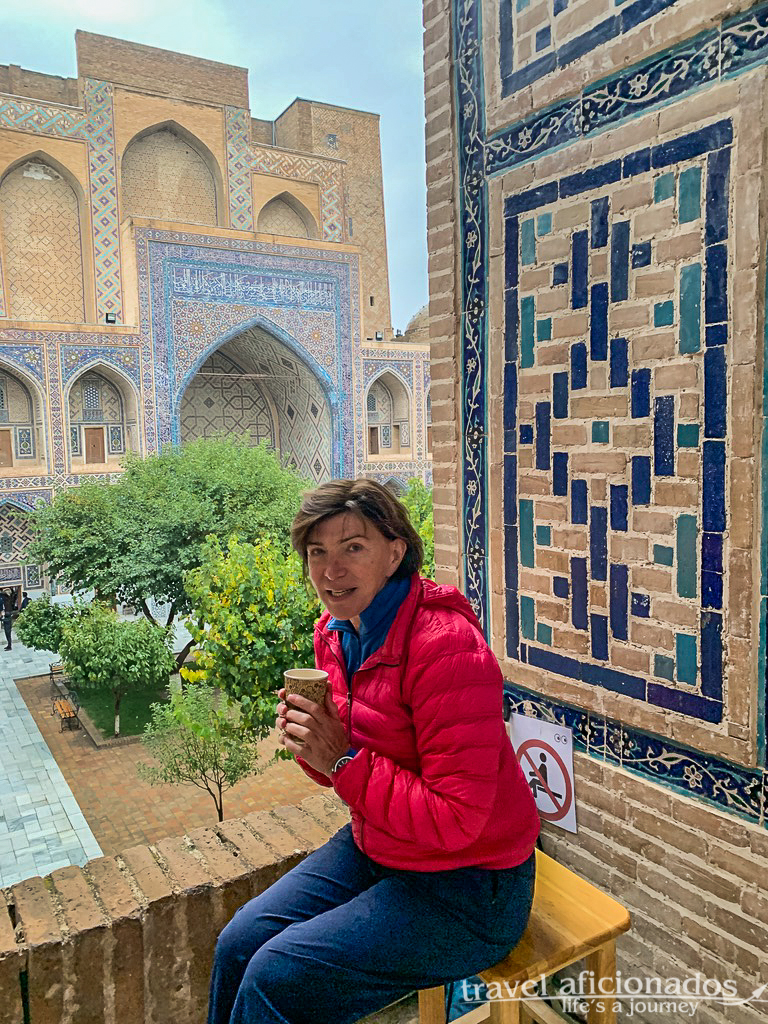 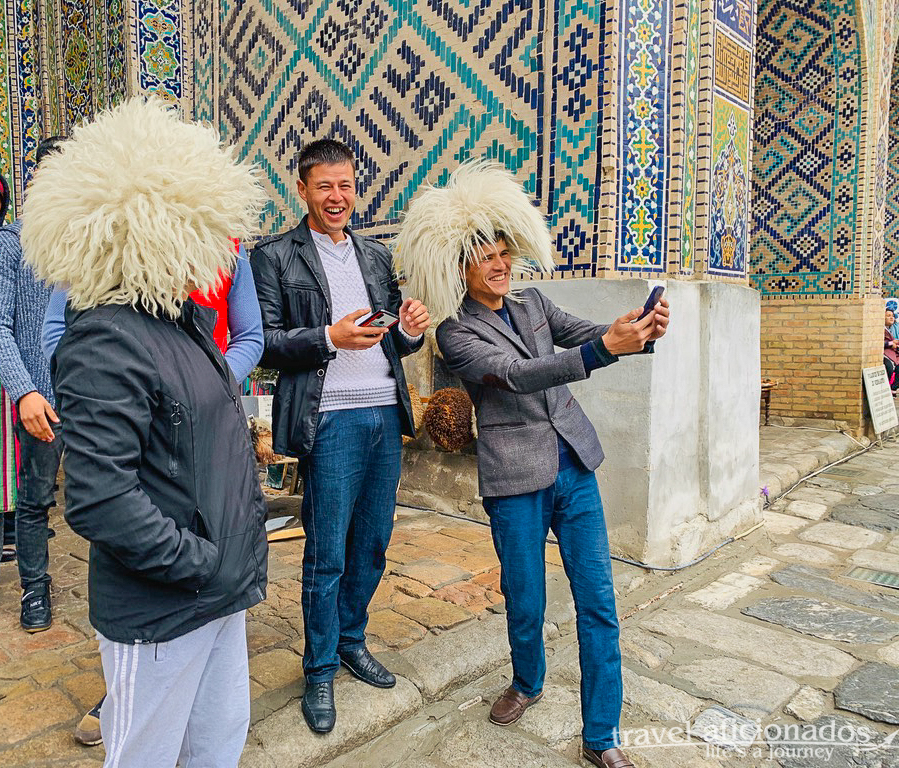 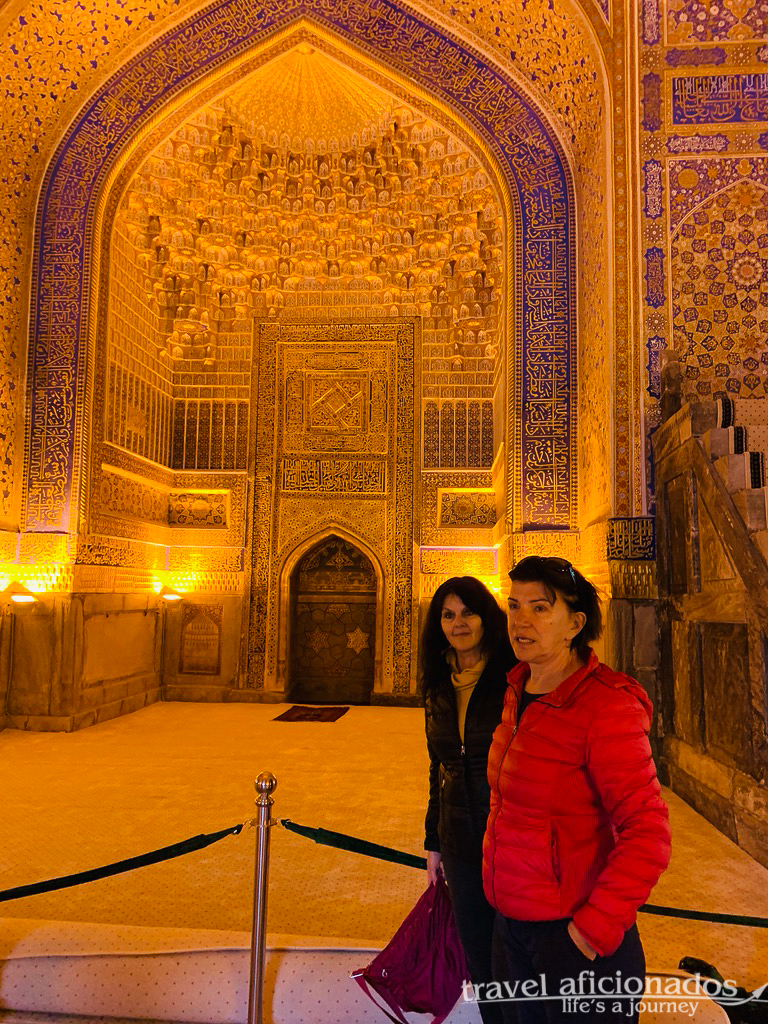 Claudia and Heidi marvelling at such beauty 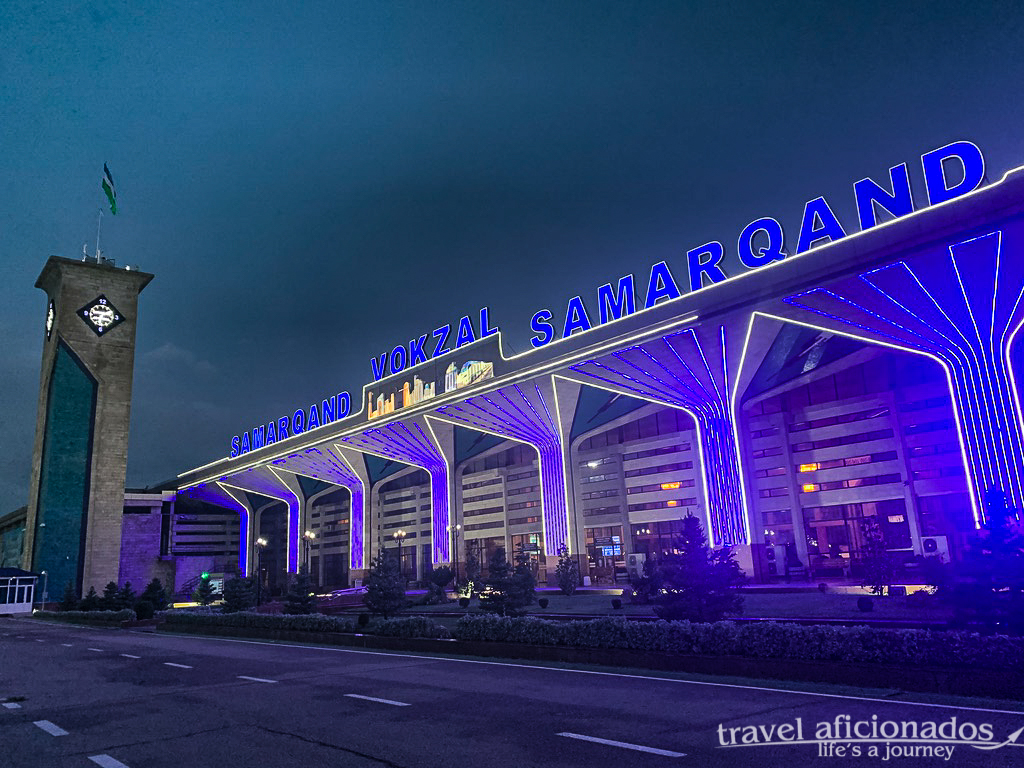 Time to catch the train for Tashkent

Bukhara – “The city of Merchants”
Tashkent – a great surprise