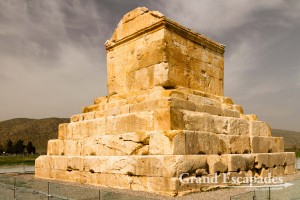 Pasargadae is where it all started – the large Achaemenid Empire with Cyrus (580 – 529 BC) as its first king. He founded Persia by uniting the two original Iranian Tribes – the Medes and the Persians. And it is his tomb we came to see. We had the place pretty much to ourselves: not many tourists find their way here, although it is not that far from Persepolis.

True its buildings (what is left) are of a much smaller scale and less impressive than Persepolis. But don’t forget – King Cyrus was just starting a long dynasty of famous kings like Darius and Xerxes. Simply standing in front of the three-stepped platform where King Cyrus rests made our skin growl: A king over what is today Iran, Libya, Egypt and Sudan… 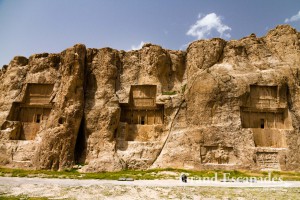 The tomb and the citadel in Pasargadae are the only remnants that non-archeologists can truly appreciate. All the other remainders require a lot of imagination to fully appreciate the former splendor.

Nearby Naqsh-E-Rostam (no need to pronounce this name flawlessly) is another must-see. The tombs of the famous Persian Kings Darius I & II and Xerxes I & II are carved into the rock’s face. Standing on a small hill, you cannot help but be moved by so much history.