By Heidi Sequenz on 27. February 2022 in Allgemein, Europe, Ukraine

Kievan Rus – the powerful East Slavic state founded in the 9th century – is seen as the beginning of Russia and the ancestor of Belarus and Ukraine.  The shining copulas of the many churches and monasteries are clear evidence of  Kiev’s historic importance. Nowadays many Ukrainians would rather have all historic ties to Russia  cut and forgotten. 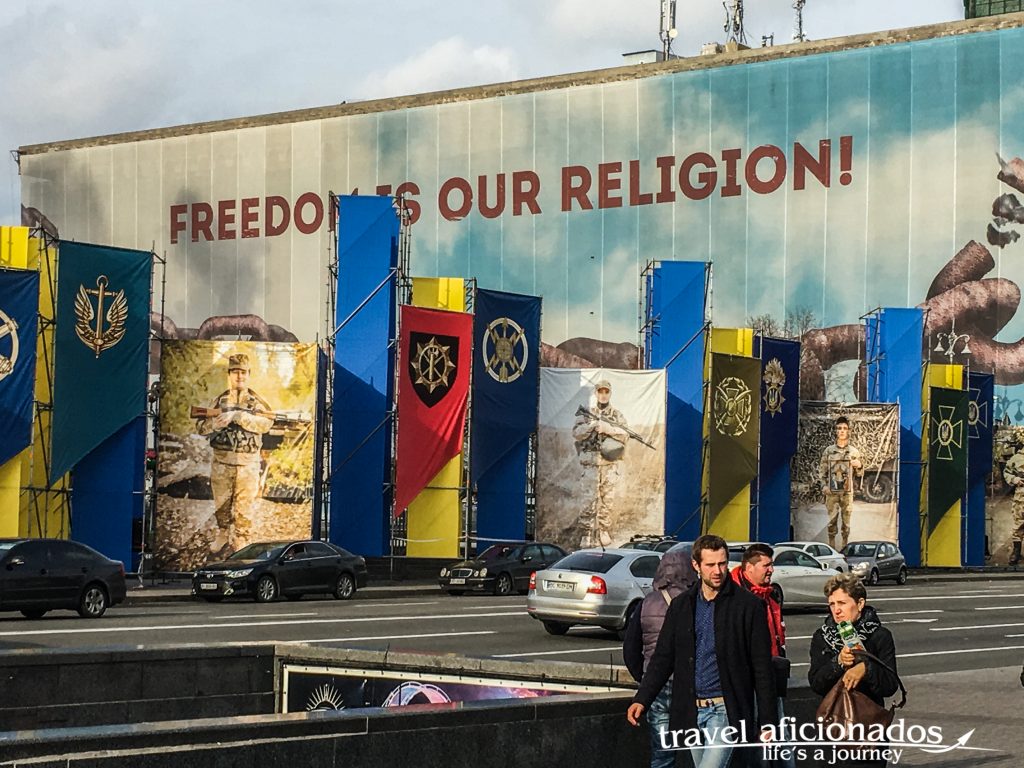 In the bitter cold winter months of 2013/2014 mass protests on Kiev’s Madjan led to lethal clashes with the police. The issue was whether Ukraine should move closer to the EU or Putin’s Russia. Despite the bitter cold thousands camped on Madjan. Today it is a peaceful square, but the past is omnipresent. A sea of blue and yellow flags stresses Ukraine’s nationalism, gigantic photos show armed soldiers  and many  small memorials remind and honor  civilians who were killed in these February days. 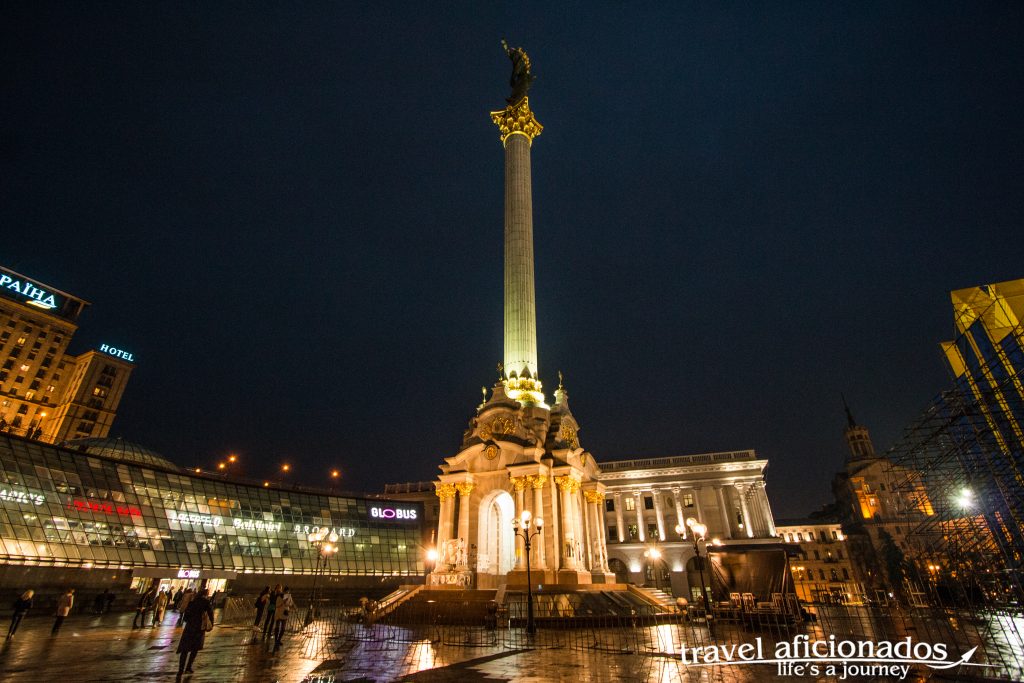 Kiev’s Majdan in 2014 the center of the Revolution 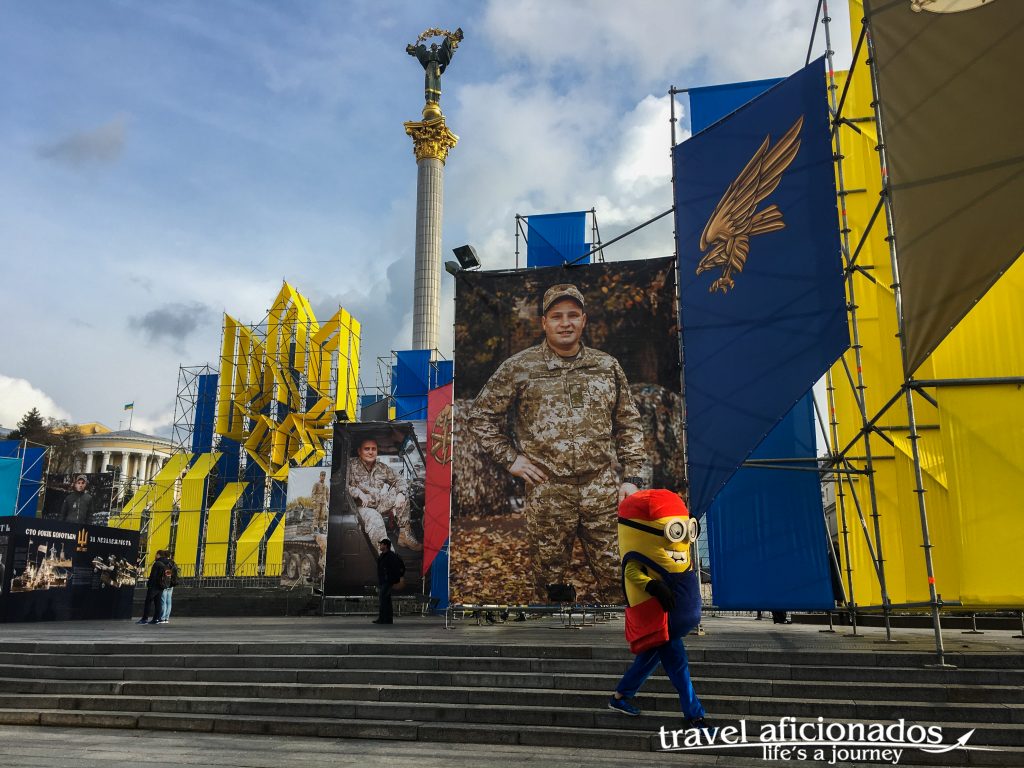 Kiev Maiden- gigantic photos of soliders, a sea of blue and yellow still remind of the fighting in the bitter cold winter months of 2014 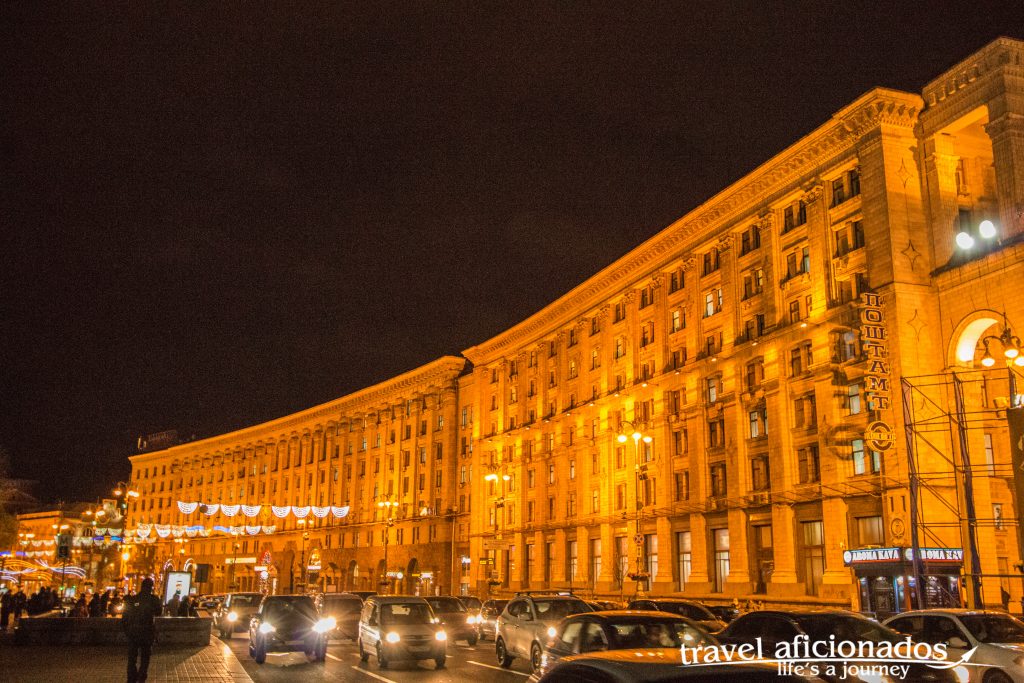 The architecture along Kiev’s Khreschatky Street looks monumental, but it not old. All buildings along this 1,5km long street were destroyed during World War II by the retreating Red Army. They  put explosives into the houses when the German Wehrmacht approached in 1941 and blew them up. In the shadow of this neo-classical post-war Stalinist architecture vendors are trying to make a living by selling woolen scarves of soccer teams, fridge magnets and cigarettes. Young men pose with doves and monkeys, students dressed in weird costumes  have their photos with locals and the few tourists, 4 US they get for doing this per day. 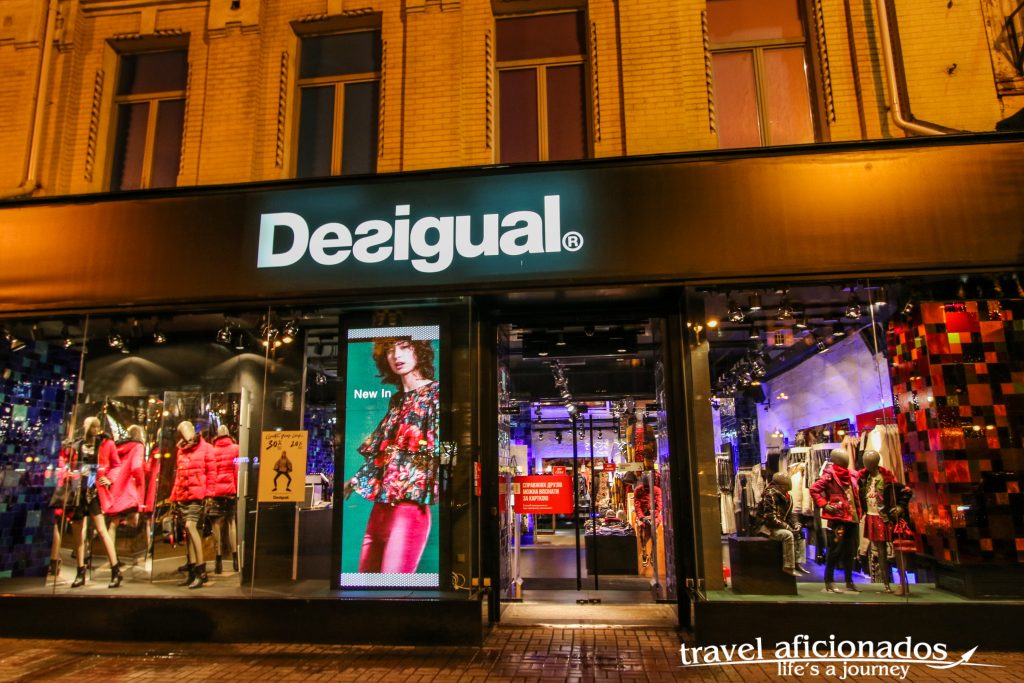 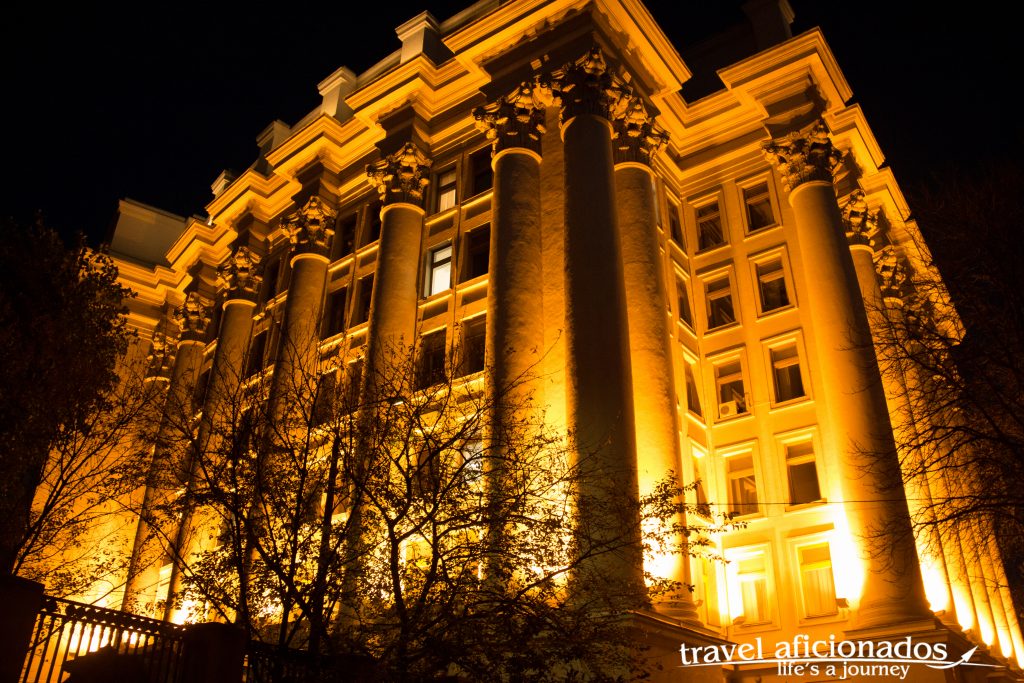 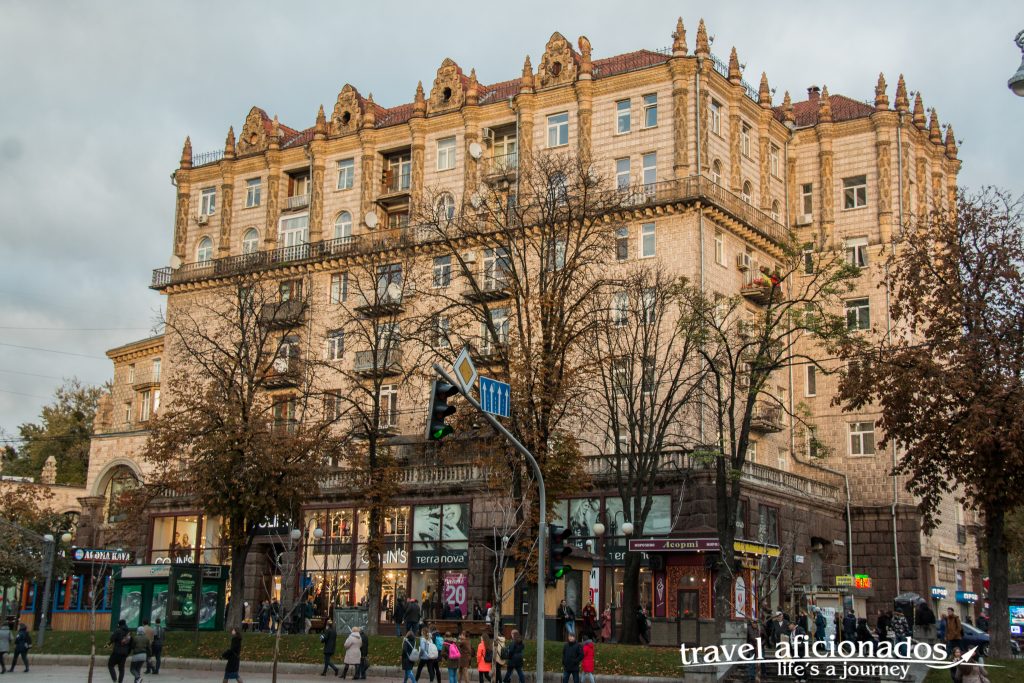 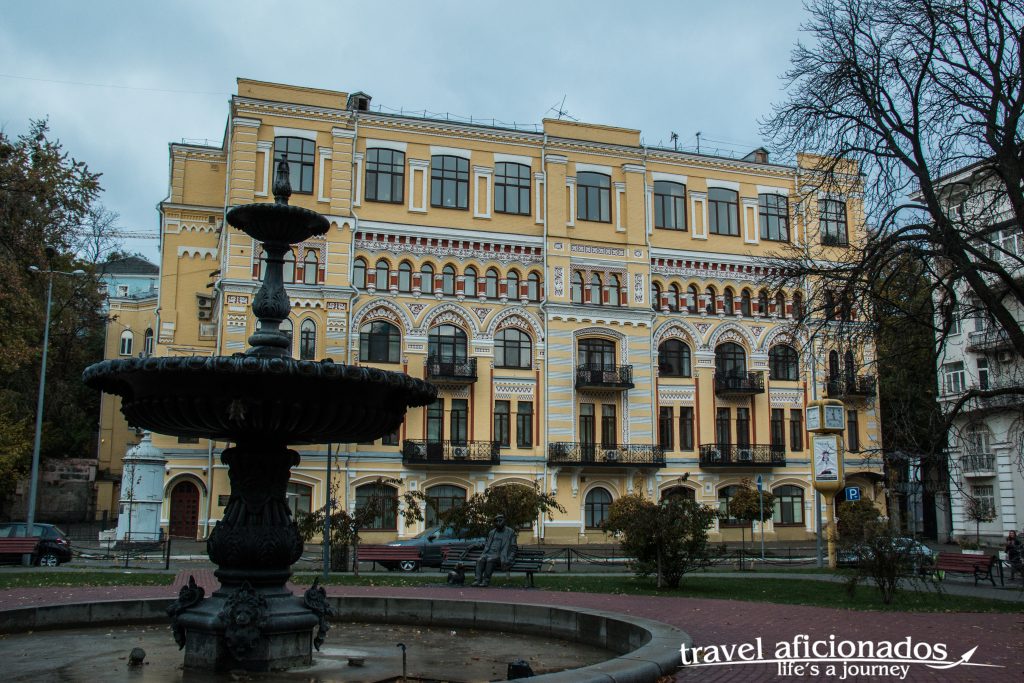 Kiev – neo-classic fassades in the center 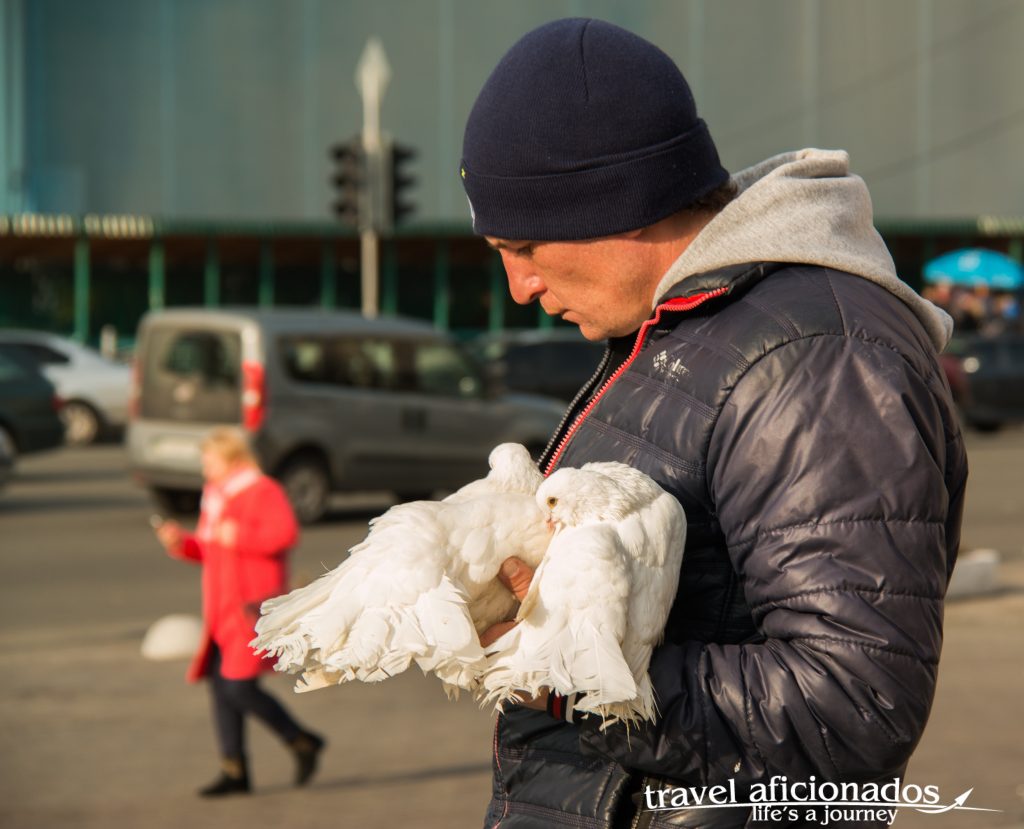 Young men posing for photos with doves for tips 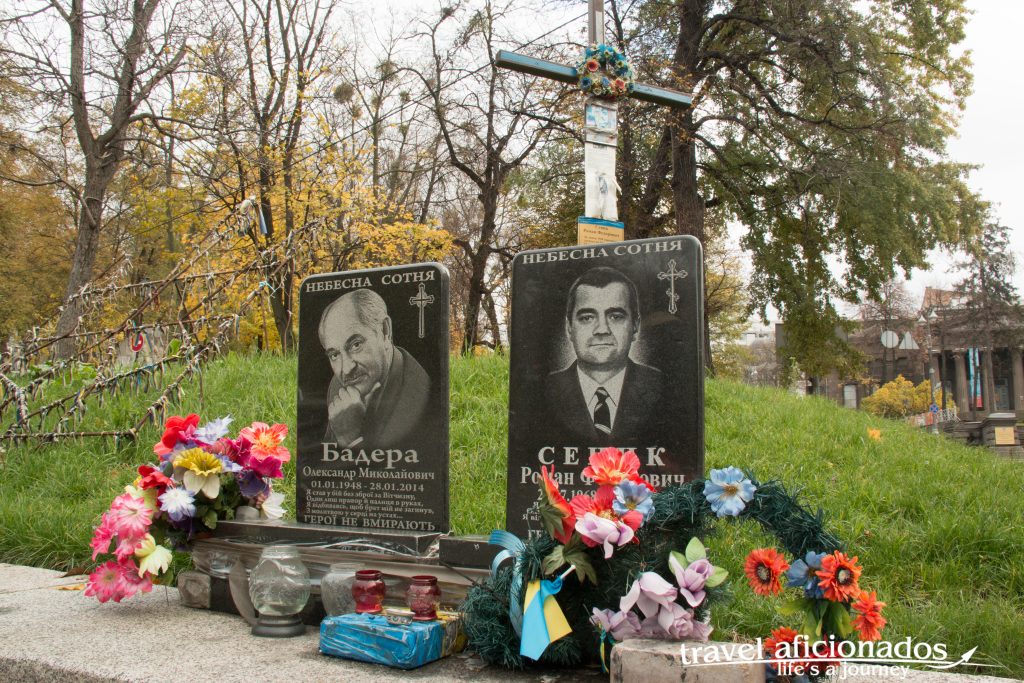 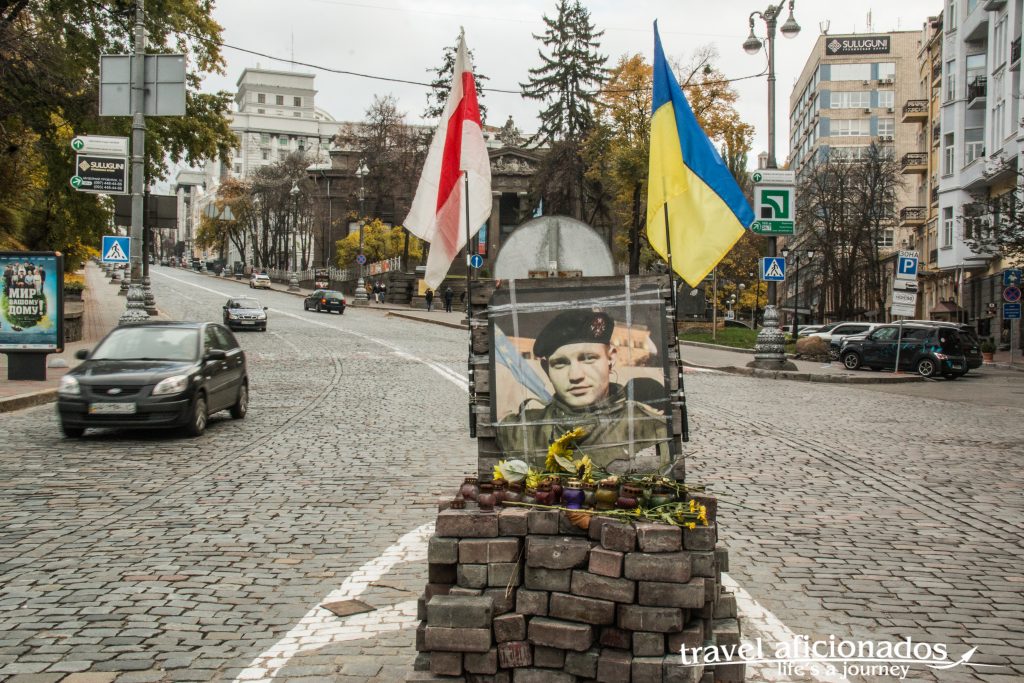 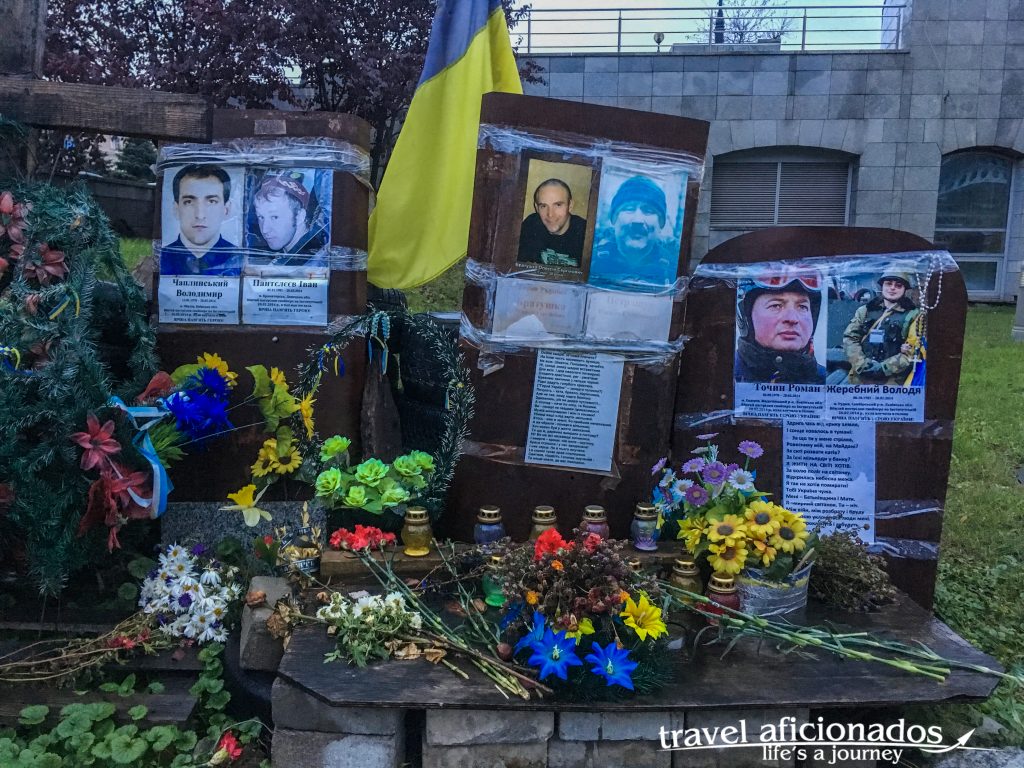 My hotel was right across the entrance to the Dynamo Kiev Stadium and one day I discovered a small memorial displaying a few soccer players. This is the touching story. In 1942 after conquering Kiev, the German Wehrmacht tried to create some kind of normality by organizing soccer games between members of the Wehrmacht and locals. The most famous one was against “Flakelf” and “Brotfabrik”, the workers of a bread factory who were actually mostly players for Dynamo Kiev. Although they Ukrainian players were threatened prior to the game, not to defeat the German team, they did so, as a matter of resistance and national pride. Communist propaganda turned this into a fake gruesome story by claiming that all players were shot immediately after the game. This is not true, some of them were even honored after the end of the war. Some of them died fighting or in concentration camps. 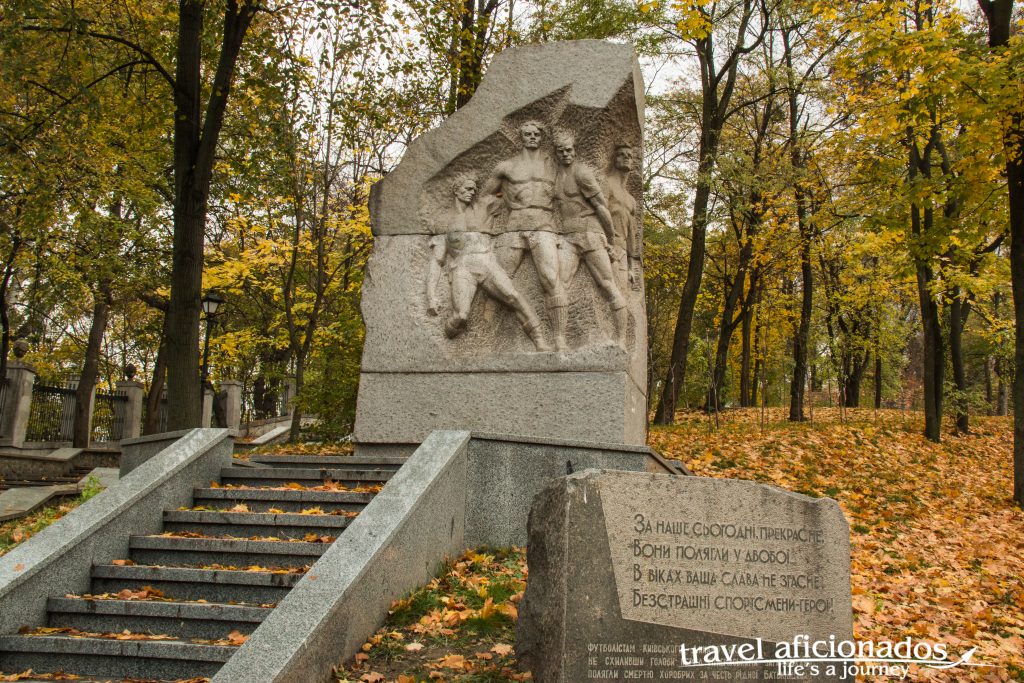