Travnik was the capital of the Ottoman Empire for 150 years. This is one of the reasons why this scenic  small town has so much to offer. The 16th century castle is the best place to get a view of  Travnik, the quaint houses, the 19 minarets, all embedded in gentle hills. Not many cities can pride themselves of having a  river starting its journey into the world from the very heart of town. It is also the home of Bosnia’s most famous writer, Ivo Andric. All in all, Travnik is a place where I felt at home, where I ate the best Ćevapčići and where I finally overdosed on this diet. 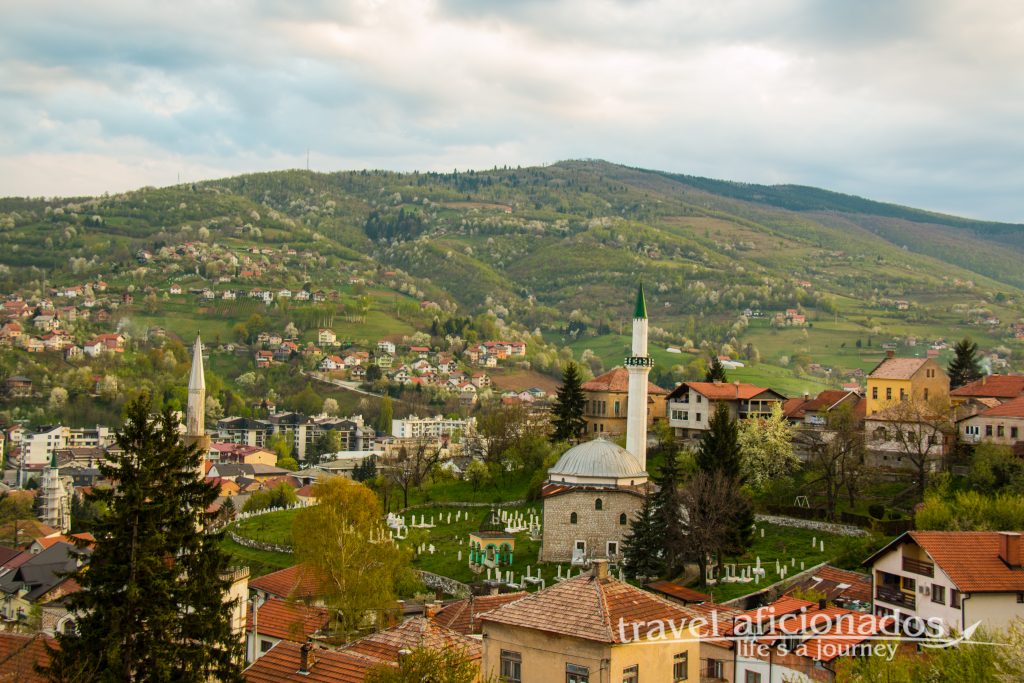 Travnik- capital during the Ottoman Empire

The first time I heard the name Travnik was in a café in the city of Graz/Austria. I was helping the local Green Party in a crucial campaign and met Bedrana, a local politician. Over a coffee she started telling me about the town she and her family fled from during the war and she showed me photos – green hills, minarets, quaint houses and a river gushing out of a rock face. 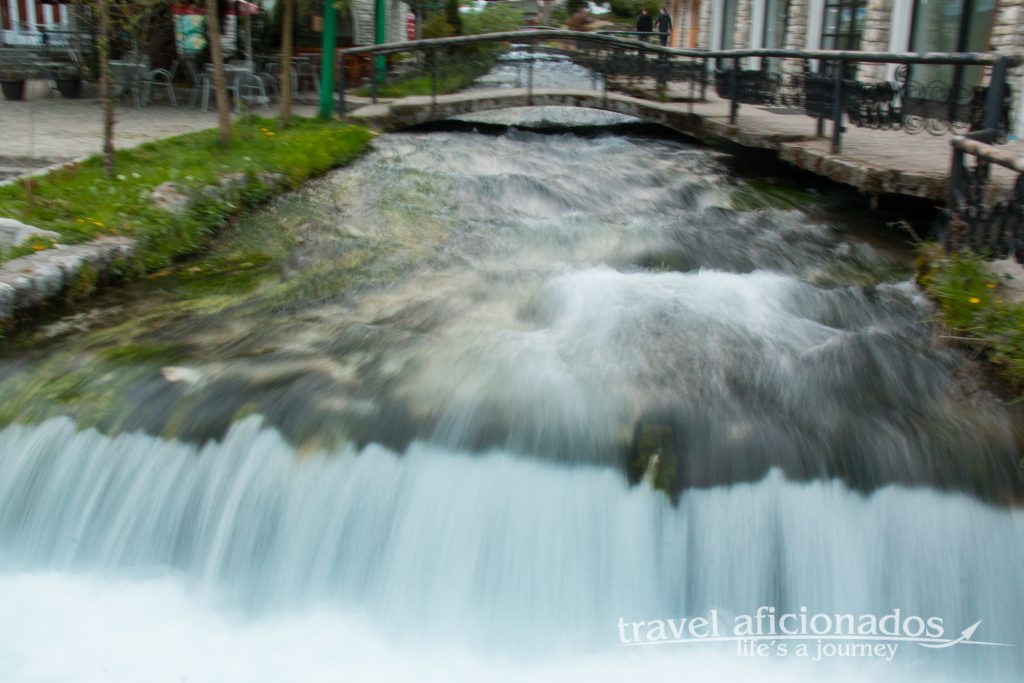 Travnik – Vlada Voda, the spring of this river is in the center of the town

A decision was made. Two months later I boarded a bus in Sarajevo and headed for Travnik. I had found a small flat on the internet for $20 and was eager to have my high expectations fulfilled. 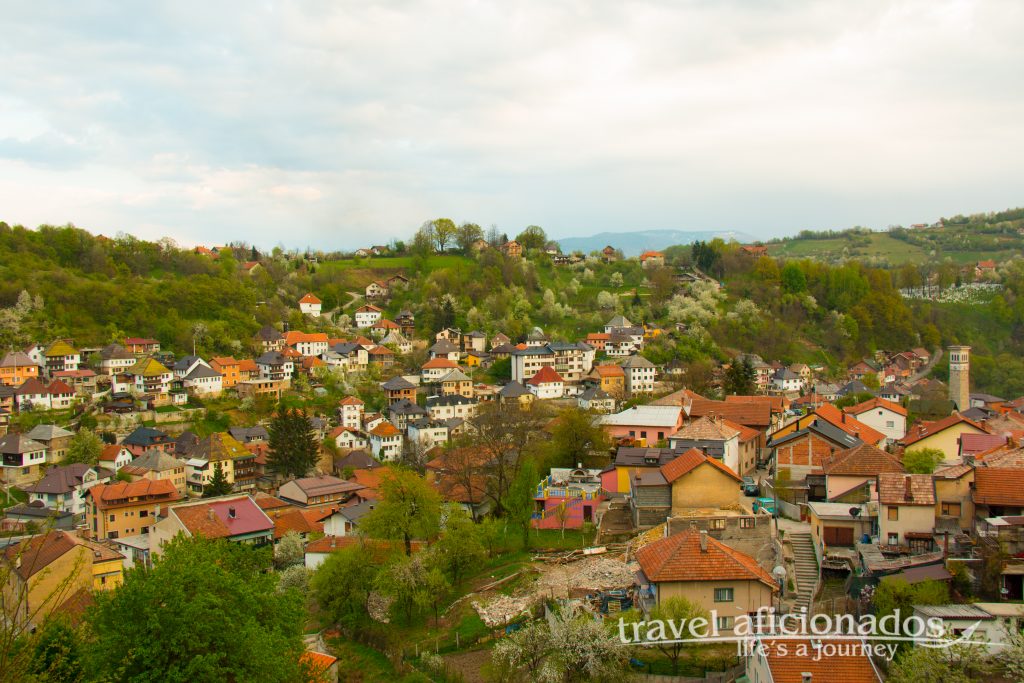 Travnik view from the castle 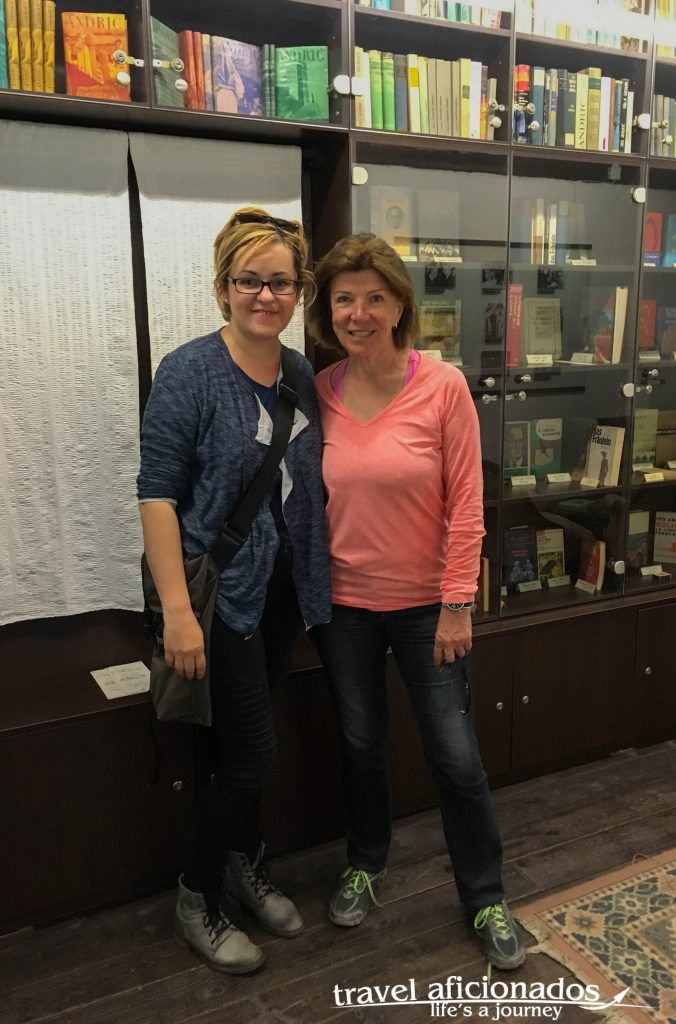 Bedrana and Heidi in the library of Ivo Andric’s former home, now museum.

The start was bumpy – nobody knew the address I had – somehow I retrieved the phone number and Selma and her mother picked me up in their car. Lucky me!  Selma’s family were the loveliest people ever and the small cozy apartment was right in the center of Travnik. I was the first guest. 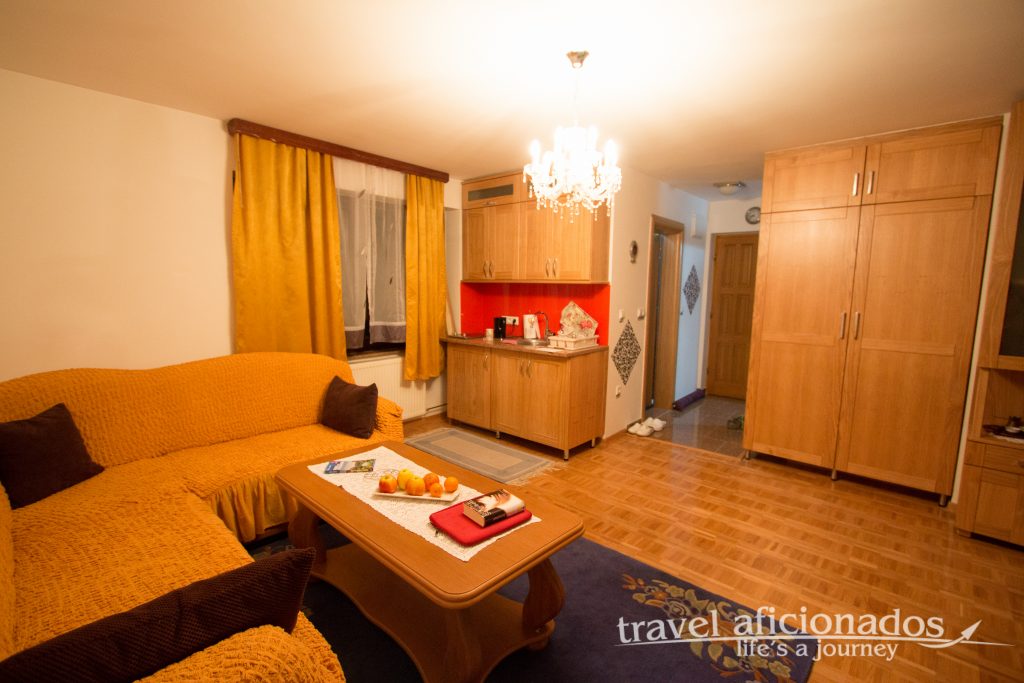 My home for a couple of days in Travnik. The small flat belongs to Selma’s family, I was the first guest.

Selma offered to take me around town, she spoke excellent English and German. During the war Selma’s family had fled to Germany, where she attended primary school in Mainz. She is now a lawyer in Travnik and knows the best Ćevapčići place in town. We finished the evening munching exactly like that, away on this Bosnian diet, served in a small container-like building by two brothers.

To my great surprise the road in front of my house had turned into a temporary pedestrian zone, where families took an leisurely evening stroll and kids had their first tries on bikes and scooter. The most soothing ambience. There are many reasons to go back to Travnik, Selma is one of them. 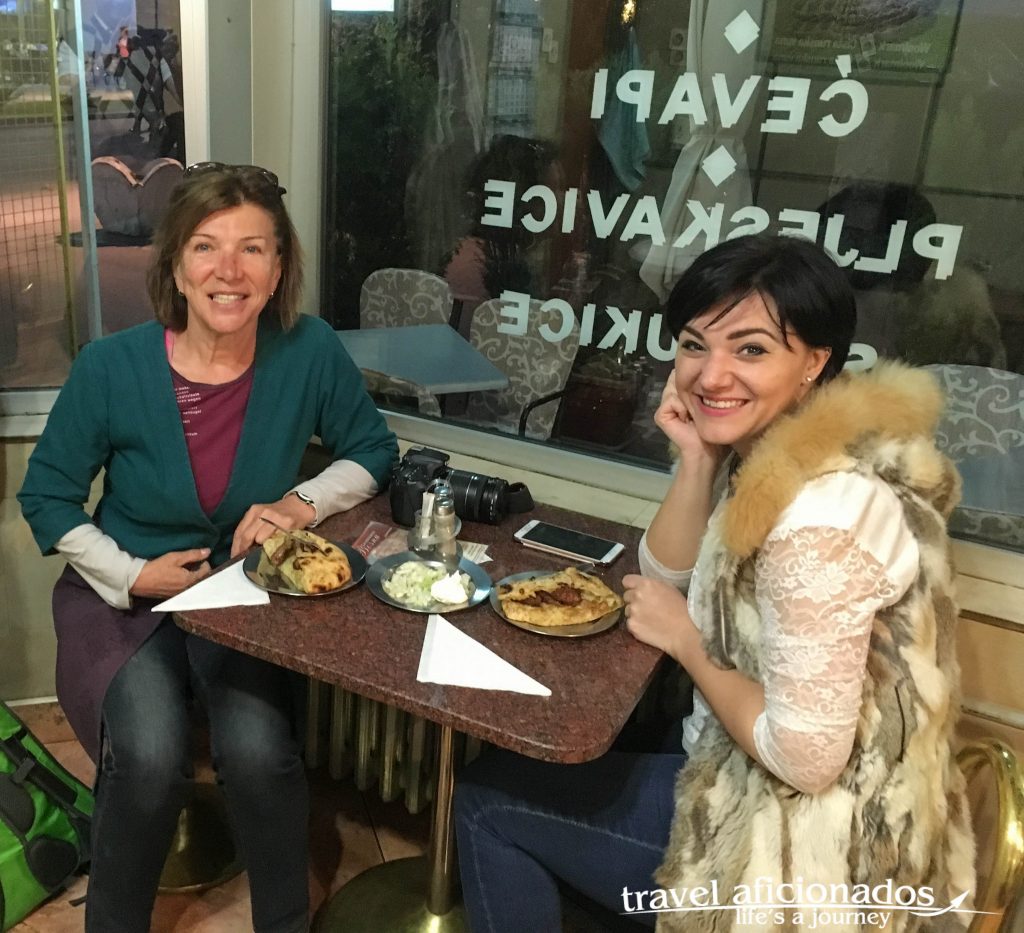 Selma and Heidi eating the best Ćevapčići  ever

What did I learn that evening? For 150 years scenic Travnik was the capital of Bosnia during the Ottoman rule and it shows. Most obvious are the slim minarets of not less than 19 mosques, somehow they fit into this town together with some churches and give the already the scenic city a “grand” look.

Stari Grad, the fortress/ castle up on the hill is over 500 years old and holds a small museum of local dresses and tools. If you feel you have seen all fortresses and museums in the world, go up there anyway. The view of Travnik with its elegant, slim minarets pointing towards the sky is worth every step. 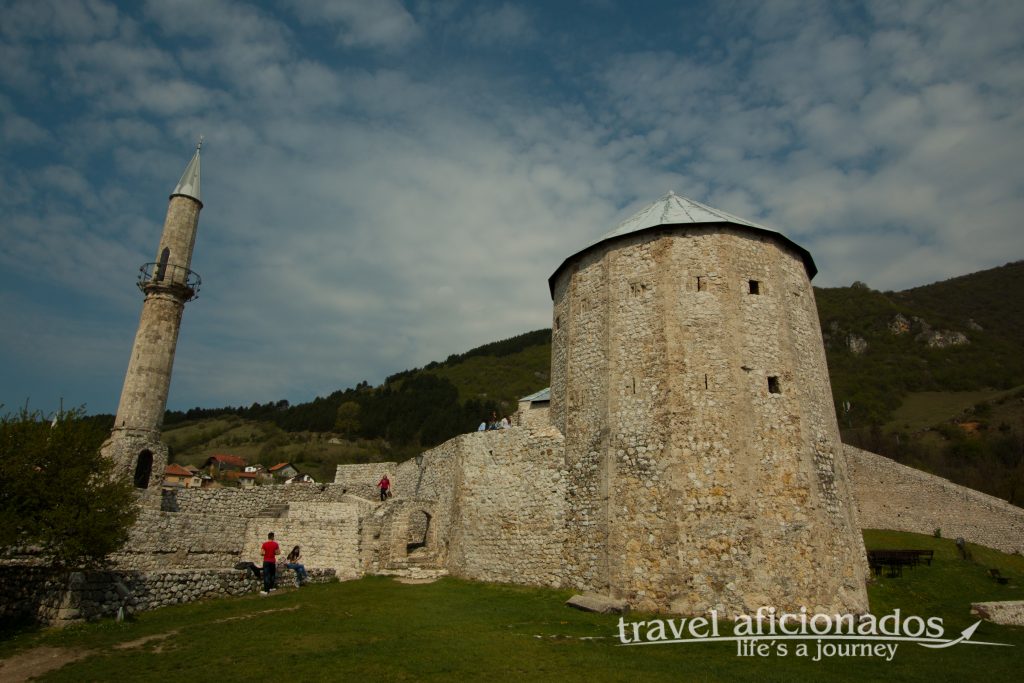 Stari Grad from the early 15th century, the old castle overlooking the town

We finished the evening munching away on the best Ćevapčići  in town served in a small container-like building by two brothers.

To my great surprise the road in front of my house had turned into a temporary pedestrian zone, where families took an leisurely evening stroll and kids had their first tries on bikes and scooter. The most soothing ambience.

First things next morning I went to see the river emerging from a rockface as Bredana had described it to me. I still could not imagine what this was like. Well, it was like promised. Lots of water was gushing out of the rock, immediately forming a small stream that runs through town. Amazing was how much the streams cooled down the air in its immediate surroundings, making the area a popular meeting place in town. It is a not only a nice short stroll along the stream, but a great place to hang out in the few cafés and souvenir stalls.

Plava Voda, right in the center of Travnik is the spring of this river 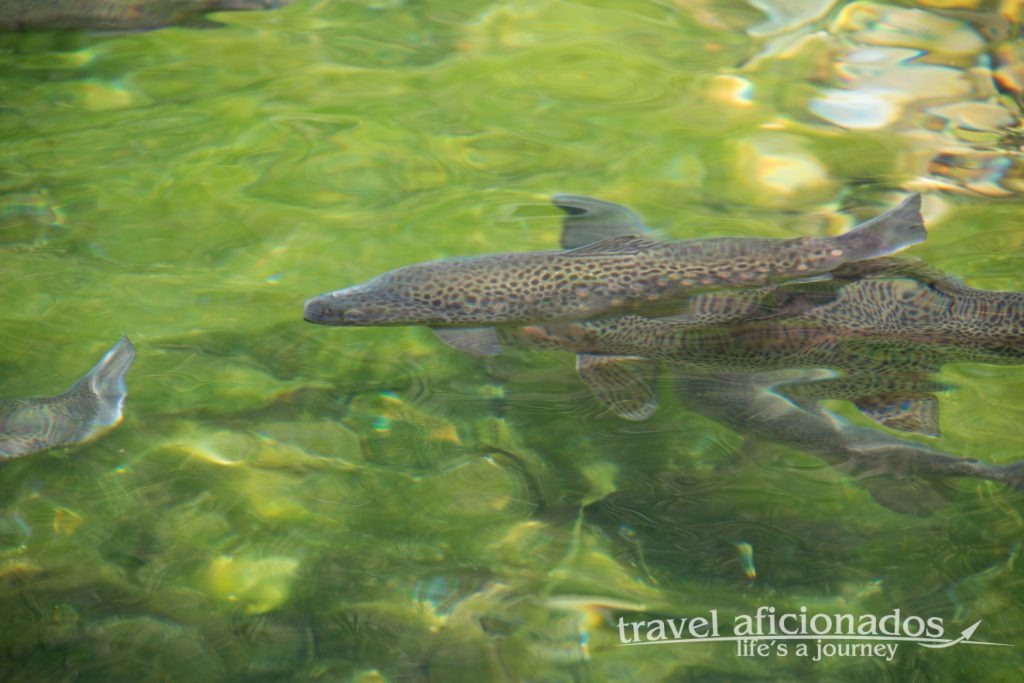 Plava Voda, in the center of Travnik, the water from the spring is cold and cristal clear

Travnik is also the hometown of Ivo Andric. So next on the agenda was the former home / now museum of Ivo Andric,  Bosnia’s most famous and honored writer. I could not find anybody to sell me a ticket or allow me into the small museum that  displays some of his books and some personal items. I was about to up when —- Bedrana arrived who was  spending the Easter holidays  holiday with her family in Travnik. First and last time we met was months ago in Graz/Austria. She took matters into her hand and a lovely lady gave us an informative tour. I bought the book The Bridge on the Drina which is a travel through time, from when the bridge was built under a determined but brutal Ottoman governor to the late days of the Habsburg Empire. 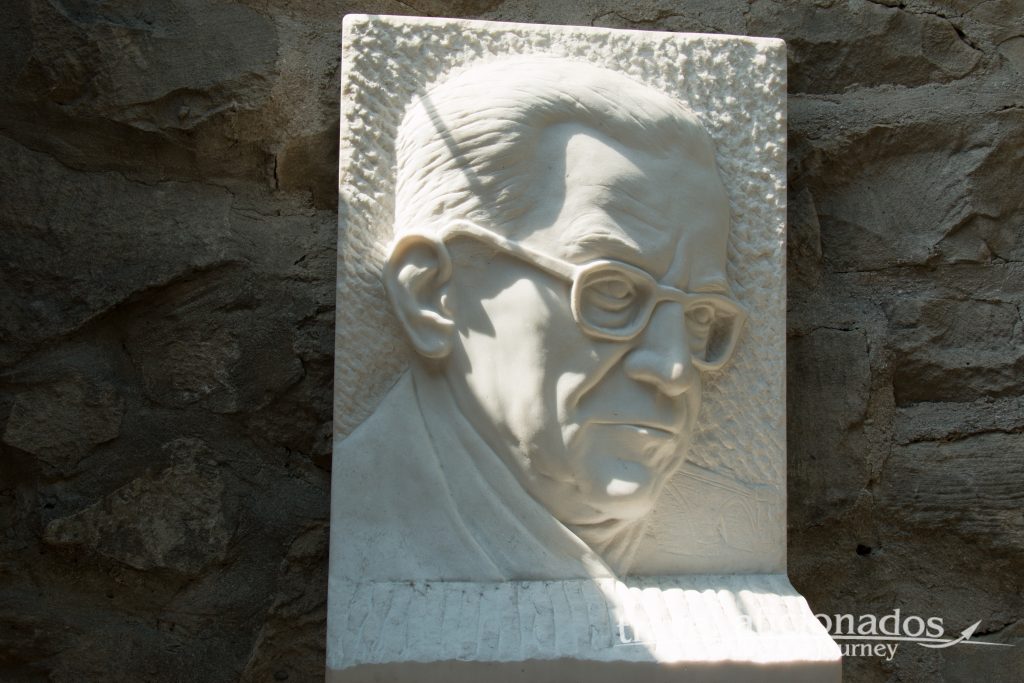 Two schools under one roof – ethnic Segregation in 2017

To be honest I would not have noticed it if Bedrana had not pointed it out. Across a small stream was a large building painted in two different colors. The larger section was blue and looked well kept, whereas the left and smaller section was painted in a fading yellow and it looked a bit run down, full of graffiti. The blue section was so nice looking because it had been renovated by the Catholic church and for the „Croatian“  students. It was also better equipped I heard, whereas the left section of the building was the public school for Muslim students. If you think there is no stronger way to tell somebody you are inferior, wait. After the renovation was finished, a fence was put around the  Catholic section, so the kids – god forbid – cannot mingle during break. Bedrana told me it is not the only school in Bosnia that segregates students that way, but she also mentioned that students and parents from both sides protest against this policy. To me this segregated school in Travnik showed how torn and Bosnia’s society still is. 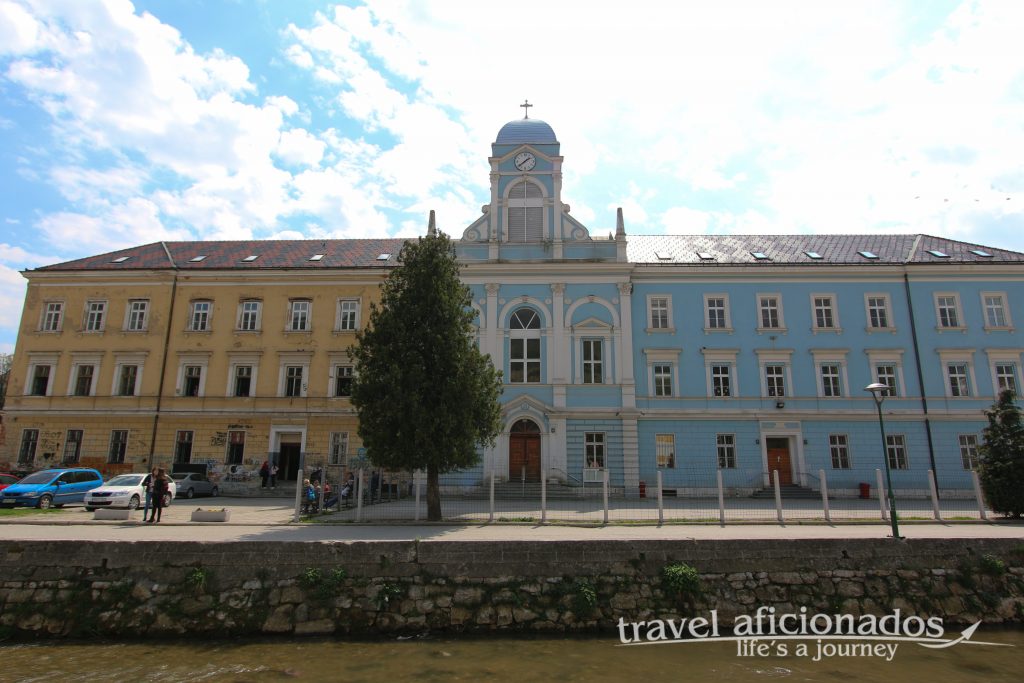 School in Travnik, the blue part was renovated by the Catholic Church and is attended by Croatian Bosnians. The yellow part, run-down is a public school attend by Bosnians, Muslim students. To keep them apart a fence separates the two sections.

A drive through the peaceful country side took our minds of this atrocious injustice. We passed by Bedrana’s grandmother and her father’s former home, which he was in the process of fixing up. 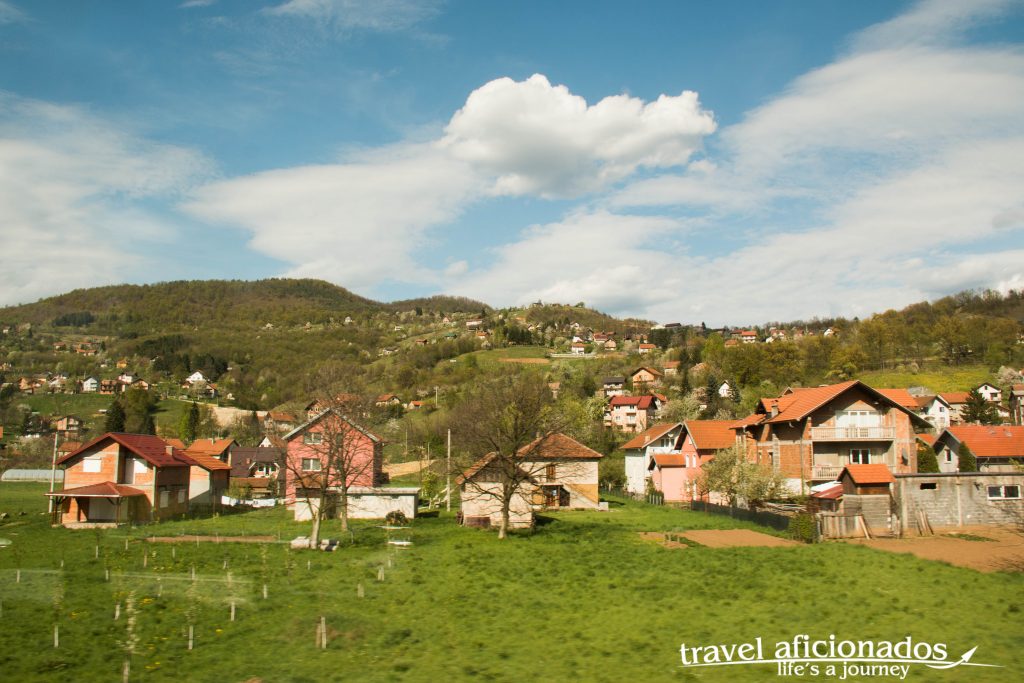 Lots of Bosnians who now live in Germany or Austria are spending their holiday in the villages they came from, trying to keep memories alive and keep in touch with those family members who never left. Some houses still show serious destruction from the war and decay that followed. Very often these are properties where the ownership is in doubt or people argue over it. 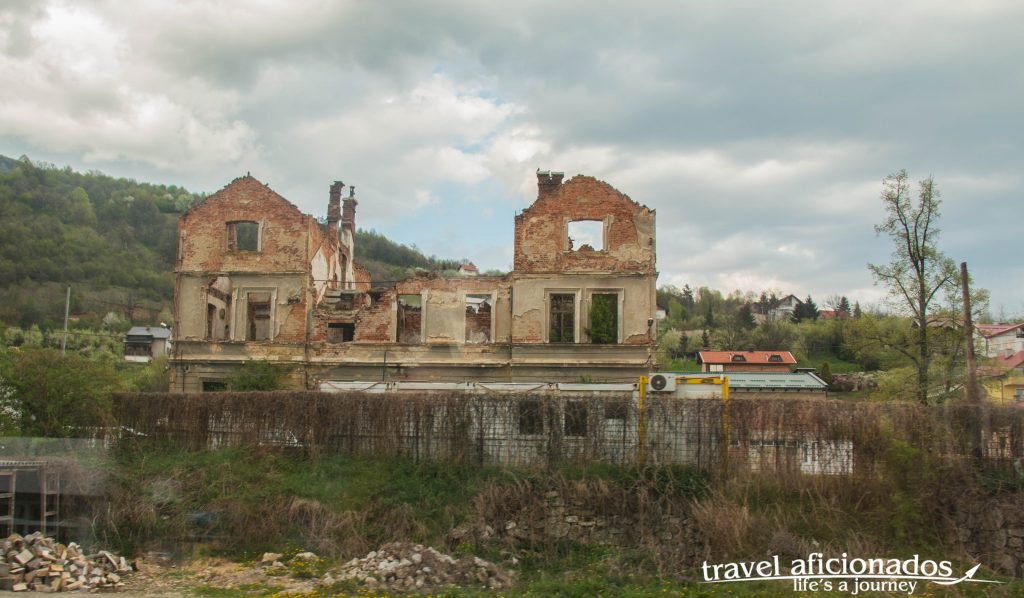 Properties destroyed during the war and neglected because of the ownership is in doubt or various people argue over it.

A rather absurd fact was that everybody seems to grow strawberries now, to be exported. Bedrana told me that so much toxic stuff was put on them that the farmers received precise instructions how to handle them.