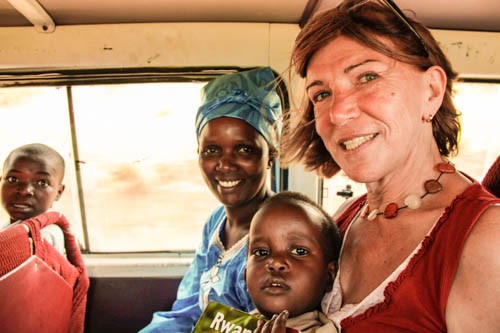 My passion for Rwanda stems from its tragic history. Not that I was aware of the horrifying dimension back in 1994, but I realized that this was different to the many civil wars that Africa has been plagued with. The film "Hotel Rwanda" left an inerasable imprint in my heart. This was further deepened, when in 2009 I had the privilege to meet and talk to Mr. Paul Rusesabagina in Vienna. What puzzled me now was the question “How does a small country like Rwanda cope with the murder of 10% of its population within 100 days?” Of course the question couldn’t be answered during a two weeks visit, except a few glimpses.

END_OF_DOCUMENT_TOKEN_TO_BE_REPLACED 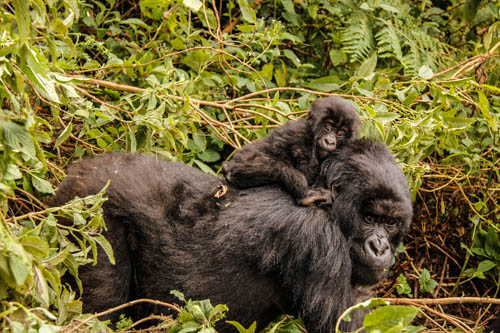 The silverback we saw first! He sat there big and mighty, leaning against a tree. He had turned his head to get a good look at us. Bored best described the very look. His young son had his attention - playfully he whacked the kid with his paw, which sent the youngster rolling over the forest floor. What seemed rather violent to us was mere fatherly tenderness…

Lots of others, large and small, young and old were climbing, wandering around, but darn, it was too dark to take photos in the bamboo forest. Only filming produced some kind of image. Edward showed mercy and suggested to follow the group to a clearing and start the countdown then. Time never is more precious, only one hour can be spent with a group. Well, the gorillas chose the bottom of a crater and by the time we caught up with them we had an injured lady. She slipped on the moist vines and ended up with a big cut on her temple.

END_OF_DOCUMENT_TOKEN_TO_BE_REPLACED

“It will be an easy trek”, Edward, our guide, chirped… Words our group of eight took in like honey. 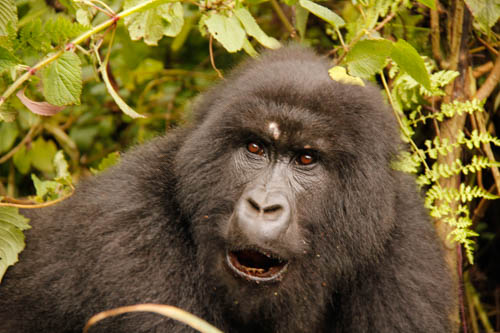 meeting a member of the Hirwa Family

Which trek, which group will I be assigned to? This is the big question we all pondered, even months before the trek. Will I be assigned the notorious Susa Group, high up on the slopes of a volcano? Once Edward showed us a photo of the Hirwa Family that we were going to see, all tension was gone. In chorus we sighed and cooed looking at these cuddly images.

END_OF_DOCUMENT_TOKEN_TO_BE_REPLACED 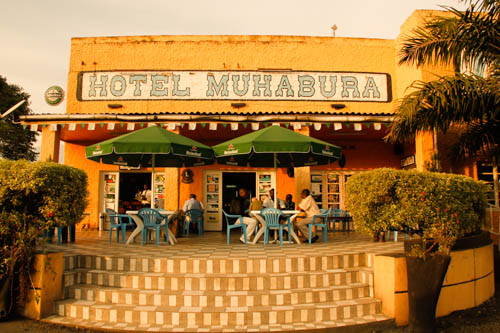 When Dian Fossey came down from the mountains, she always stayed in the Muhabura Hotel in Ruhengeri, always in the same room. Could I get any closer to this brave woman? Who killed this famous researcher has not been found out, but the motive certainly rested in her undeterred devotion in protecting her beloved gorillas.

The Muhabura was the very first hotel in town and is still an all time favorite. It has true character, a devoted staff, and an excellent view of the volcano of the same name.

END_OF_DOCUMENT_TOKEN_TO_BE_REPLACED

This is the most unusual story about my first night in Kinigi, when I travelled endlessly on the back of a Moto through a pitch-dark forest, balancing a dish of spaghetti... 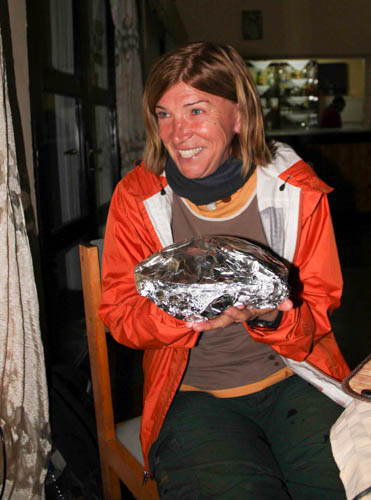 after a trip into nowhere on a moto, Heidi holds on the a bowl of spaghetti till the end

Why? Read on! It was already dark when I arrived in Kinigi village, down from Ruhengeri. Chilly it was high up there, but I was euphoric. I had found a guy who took me up the mountain on his Moto for 2 USD, whereas most tourists end up paying 20 USD for a taxi, once public transports stop running. I even remained calm when the La Paillotte Guesthouse in Kinigi was full, despite the reservation I had (it was the only one I ever made in Rwanda).

“No worry”, the young lady at guesthouse said, “We have another, much better guesthouse just up the road”. Food? Plenty there! I jumped on another Moto to fetch my permit from the Kinigi Guesthouse and zipped back to La Pailotte. Now the story had changed… “No more food at the new house, but why don’t you take a large bowl of spaghetti and bread along?” Yes, why not?

END_OF_DOCUMENT_TOKEN_TO_BE_REPLACED 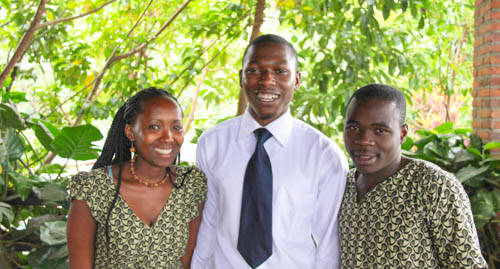 If it were not for the lake, Gisenye would be another non-descript African town with dusty streets and battered buildings. At least the very center looks exactly like that. But this ugly duck became incredibly beautiful through the friendliness and helpfulness I experienced.

In order to go online with my laptop in the packed Internet café, I would have had to set up an account with a Rwandan mobile company. Confused and frustrated, I was about to pack up, when a young guy set up an account on his own mobile phone. I was so touched - and he so proud that he could help! I had to push my money onto him, 50 cents for the hour I spent online…

END_OF_DOCUMENT_TOKEN_TO_BE_REPLACED

Here in Gisenye I met two impressive survivors of the genocide, Odette and her sister Evangeline. 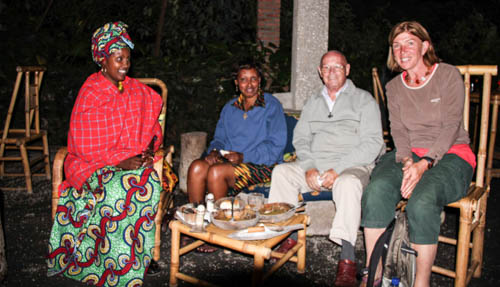 Odette, Evangeline, Pierre telling the story of how they survived the genocide

Odette managed to flee to Burundi when the killing started. Her home was burned to the ground. She returned two days after the Hutu militia was driven out in July 1994, starting a restaurant from the ashes of her former home. Business was good, so she added a bungalow. Over the years more followed and her place became what is now known as the Malahide Paradis, a divine hotel, which is raved about in all guidebooks.

How do I know all this? One evening, Odette’s sister Evangeline was visiting from Kigali, together with her French husband Pierre, who spoke excellent English and loved to talk. Born in Cartagena in the Democratic Republic of Congo, he fought with an all black militia in some of the many civil wars in this country. His grandfather had arrived with the army of King Leopold, who turned the Congo into his private colony and ruled the country with an unparalleled brutality.

END_OF_DOCUMENT_TOKEN_TO_BE_REPLACED

The hardest thing for me was being stared at and drawing so much attention, as a European woman traveling by herself. 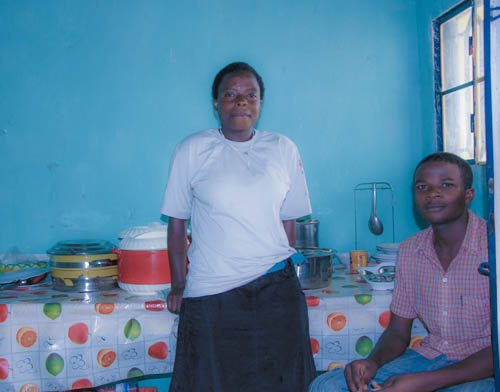 eatery in the village of Ngororero

A three hour wait in the village of Ngororero remains engrained in my memory! After Paul had dropped me off at the bus station in Gitarama, half way between Lake Kivu and
Kigali, I squeezed into a minibus to Gisenye. At the busy bus station, the usual commotion started over the bike, but afterwards the focus was entirely on me. Everybody on the cramped minibus knew where I was going. The driver had instructions to look after me and eventually to drop me in the village of Ngaruroro.

END_OF_DOCUMENT_TOKEN_TO_BE_REPLACED 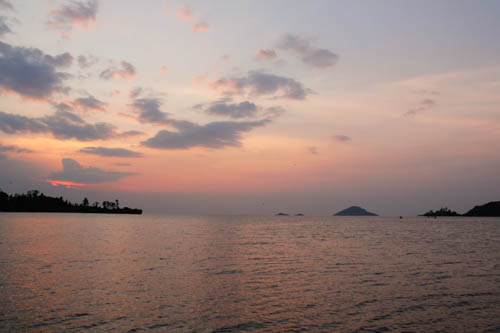 Lake Kivu, looking toward the Congo

Going to Goma was high up on my agenda. I had set my mind to see what the Congolese side of the lake looked like and maybe even trek the Gorillas from this side of the Virungas Mountains. So what a shock when I came across a blog informing that officials now charge a scandalous 275 USD for a visa issued at the border.

What first seemed like a hoax was later confirmed by John, the hotel manager of the Step Down Hotel, in Kigali. He recommended trying the Congolese Embassy in Kigali. By the time my moto driver found it, it had closed for the weekend. I could not spend three more days in Kigali and simply gave up on the idea…

END_OF_DOCUMENT_TOKEN_TO_BE_REPLACED 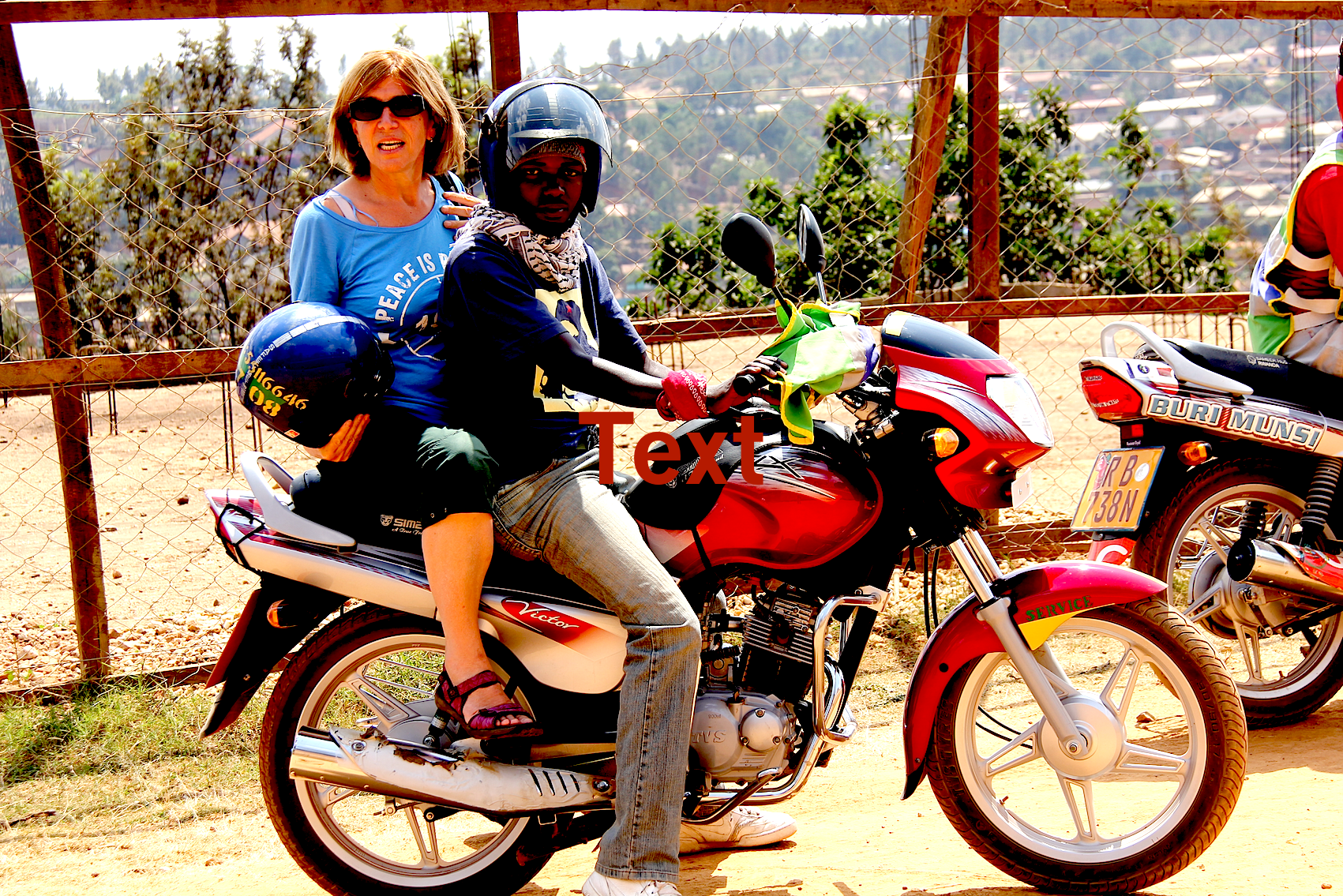 The motto - urban transport in Rwanda

A devoted Christian started preaching, singing and swinging a bible as soon as the bus pulled out of Kigali. His shouting was nerve wrecking. Soon the cramped bus was divided into two camps: those who appreciated the spectacle and others who did not. For a good reason - Mr. Preacher was disrupting a Rwandan passion: shouting into a mobile. I hoped my taking photos would irritate him enough to stop, but eventually it was sheer exhaustion, unfortunately only shortly before Butare.