I traveled northern Sudan in December/January 2017 for two weeks with my 18 year-old niece. We used only public transport, except when visiting the archeological sights of Naqa and Mussawarrat. Going there you need a private vehicle, most likely a four-wheel drive which we shared with another traveler. We went as far north as Karima and stayed overnight in Khartoum, Shendi, at the Pyramids of Meroe and Karima. There are detailed blog entries on each of these places. To sum it up – one of my best trips ever. 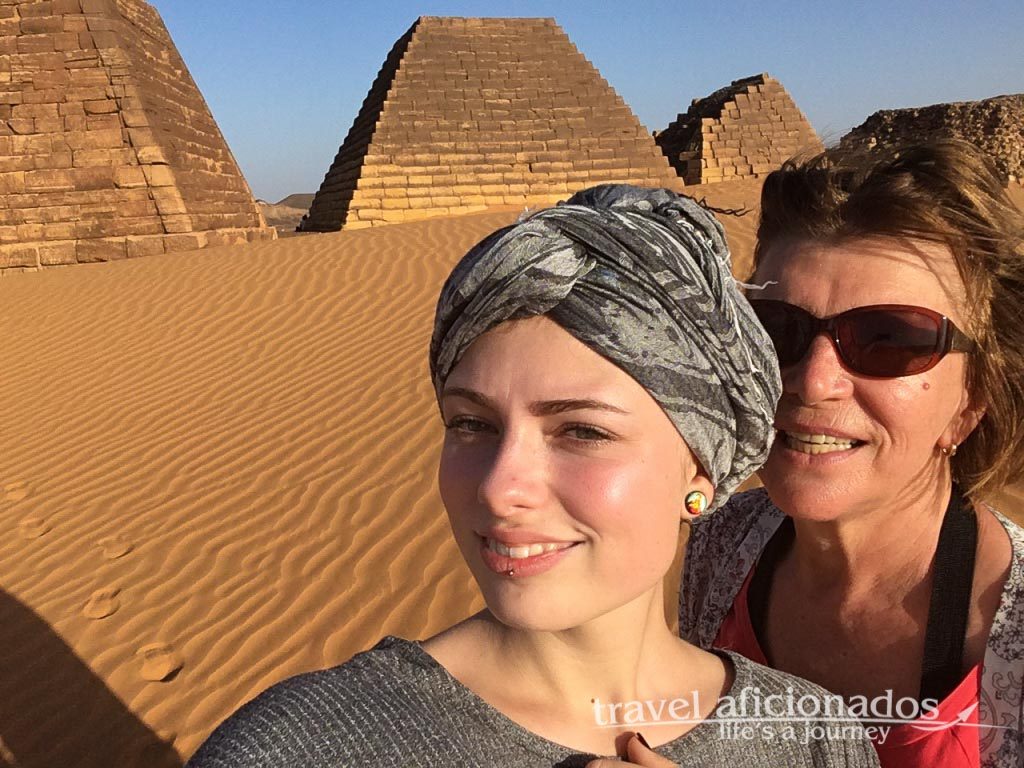 Around the beginning of December 2016 – planning ahead is not my thing – I was wracking my brain about where to go over Christmas. I had returned from my second visit to Iran three months earlier, and I stood in front of the gigantic map in my study, still in an ‘Oriental mood’, until it was decided: Sudan. I had a vague idea of what to see and expect: pyramids, the confluence of the Nile, lots of desert and the remnants of the ancient culture of the Kushite kingdom, no jetlag and the perfect temperature guaranteed. 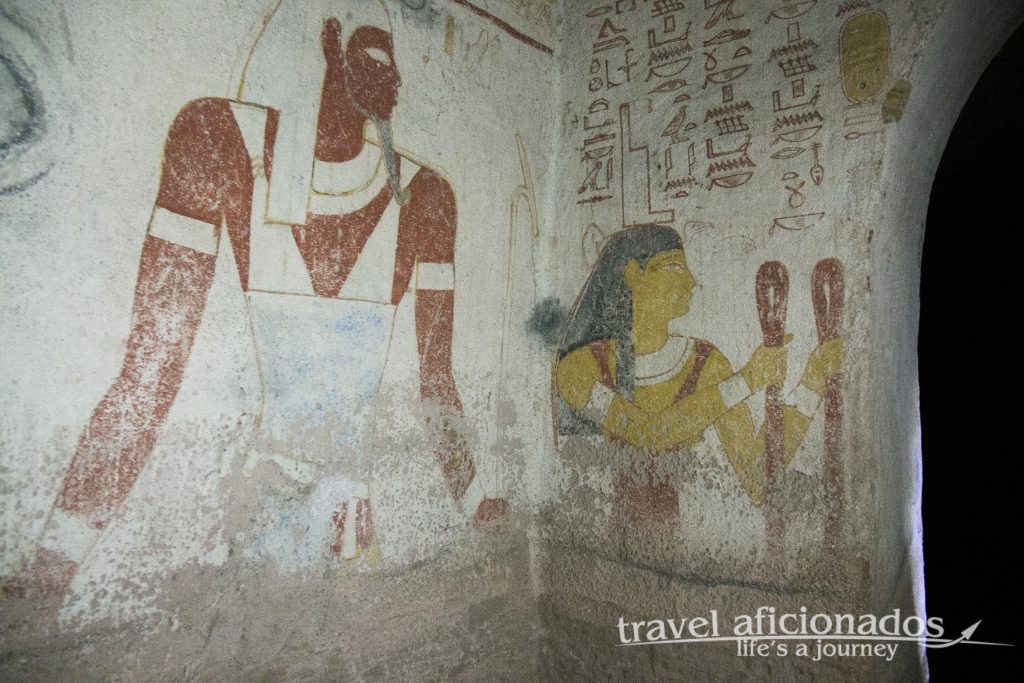 This trip to Sudan was difficult to plan,  even my far-travelled friends couldn’t give me any advice and there was very little information online. There were a few blogs, but they weren’t useful, as they were either by people who had their own transport or expats who lived in the region and just flew in for a couple of days. As a rule, if people travel to Sudan they join a tour, or at least have a driver and/or guide. I had a vague idea of what to see, the Pyramids of Meroe and the Confluences of the Nile. We arranged everything after we arrived in Khartoum.

Taking Kelly to Sudan was a very spontaneous decision. My brother told me one day how well she did in school and I thought she deserved a treat. And yes, I was not looking forward to lonely evenings and nights in a hotel room in a country void of cafés and bars, and with badly lit, deserted streets. Apart from that, in a country with so few tourists, travelling as a solo woman draws lots of attention. Not knowing to would expect us we stayed in Khartoum a fews days after our arrival, where English was spoken in the hotel. 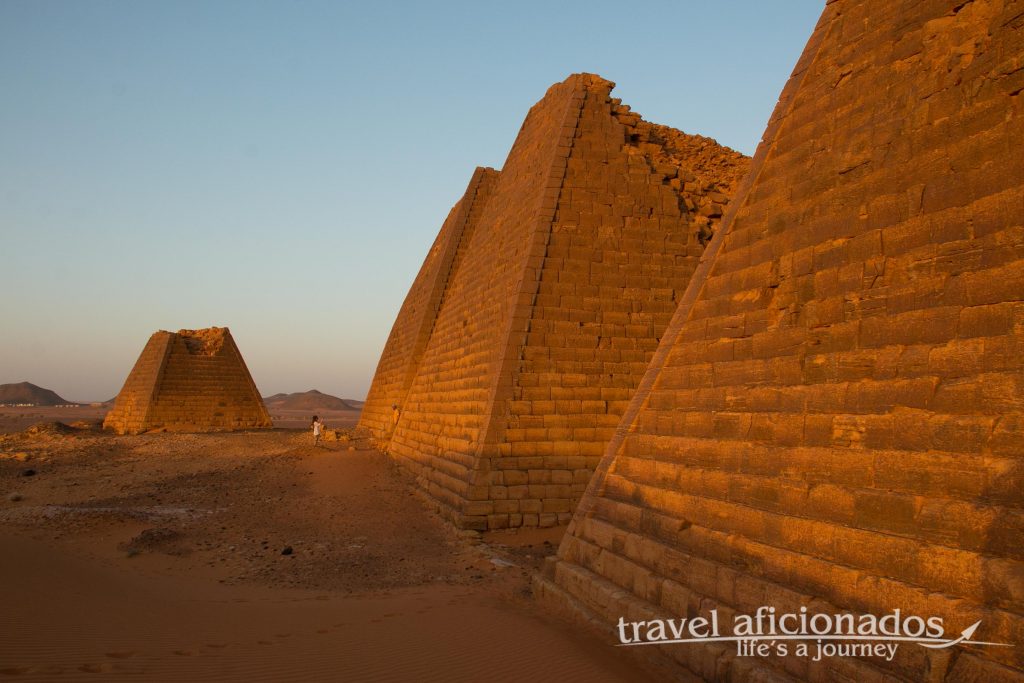 Pyramids of Meroe at sunset

The name Khartoum let’s most people phantasies go wild. One of mine was wandering around to check out the place. How foolish! Spread out, with sidewalks either occupied by parking cars, piles of sands, street vendors or overgrown with vegetation made strolling around a real pain, even in the cooler winter months. On top of that we felt like aliens. People like you us were expected to have a driver to take us around, so us walking was just a weird, inexplicable sight for the locals. So most of the time we took taxis or tuk-tuks, since walking in the heat was way to tiring, an average ride costs €2/SDG 40. Khartoum is not a charming place. Buildings, roads are not maintained, only the main roads are paved, dust and plastic litter is everywhere. So what was so great that we ended up staying five days in the capital that tourists flee from after a day? We stumbled from one pleasant, exciting experience into the next.

The road north is a smooth, paved road, lots of traffic during the week, busses and trucks going al the way to Egypt. Once you are on this road, there is always transport. If you are not starting a a bus station, flagging down a bus is the thing to do. If they are full the don’t stop, so once we ended up hitch-hiking from the Pyramids of Meroe to Atbara. 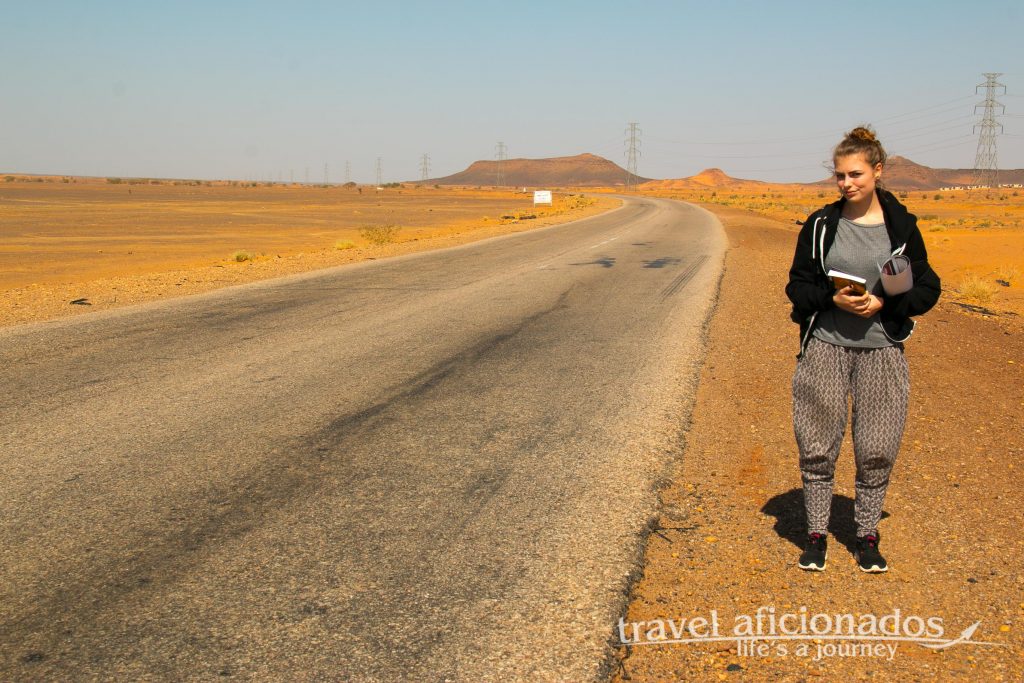 The big question was how to get to Naqa and Mussawarrat, since it is in the desert, about a one hour drive off the main road , a four wheel drive or a car with high clearance is a must. We did not want to rent a car/driver in Khartoum, that is € 250 and gets you there around noon, when it is super hot. Luckily we could share a ride with Dominic who was going there and to the Pyramids of Meroe, a bit further north. 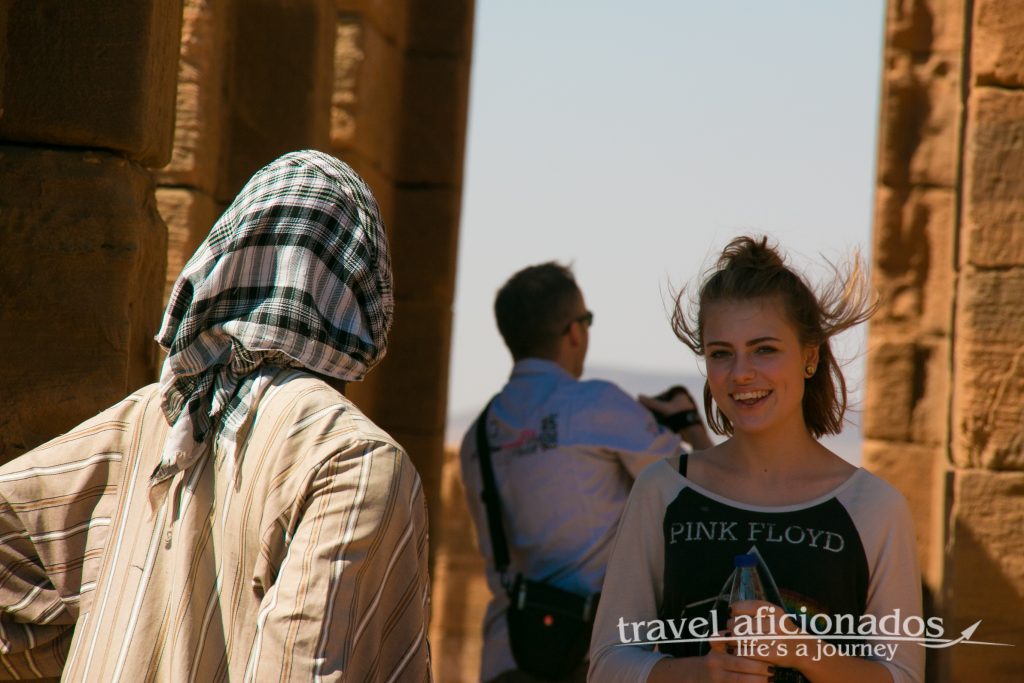 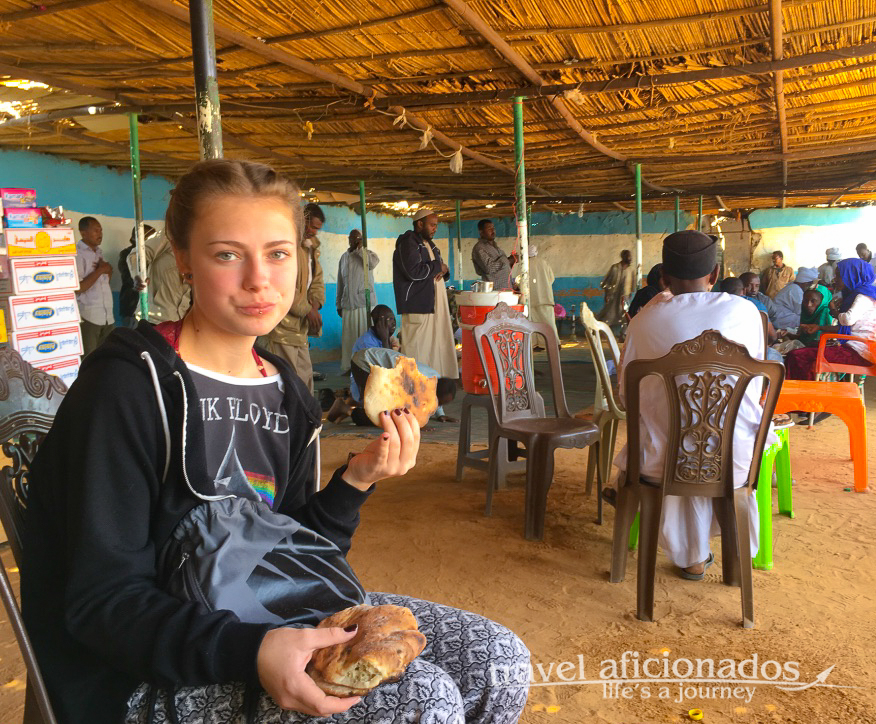 Stop when crossing the Bayuda Desert, some used it for eating, smoking, sipping tea, others for praying

Acrople Hotel (€100 per room/night): After reading great comments on the trip advisor I booked the first three nights there. For first time visitors to Sudan the European ambience, the services provided by the Greek owners are convenient and comforting. But everything is very expensive, which new arrival doo not know. The owners were quick to answer emails and even offered to issue the invitation if we booked tours with them. This is what most individual travelers do, since most of them are hesitant of taking public transport. They know exactly what you need – travel& photo permits, money exchange, a Sudanese SIM card. You get it right there in the hotel, but the costs for these services are absurd. What makes the room and the services so expensive was that we had to pay in Euros/Dollars, meaning each item was charged with the official exchange rate. This was December 2017 was of 1:8, whereas on the black market you could get 1:20. If we could have paid in SFG – like in all other hotels in Sudan – it would have been a lot less.

They also offer tours, which are also completely overpriced, ie trip to camel market with visit of Souk of Omdurman.

Hotel Acropole in a quiet side street, but the area is completely deserted at night, all shops are closed and it is spooky to walk around this is why most guests eat in the small restaurant area on the first floor. 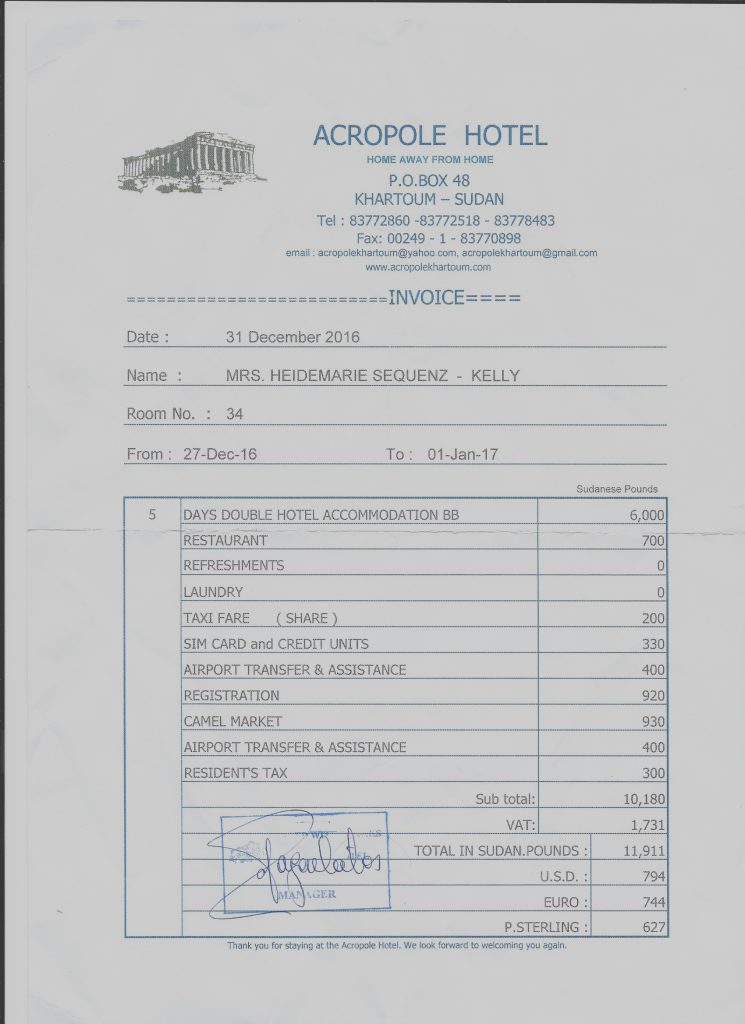 We exchanged money at Hotel Acropole for 1€:16 SDG, on the street or at Afra Mall you got 1€:20. Newly arrived tourists feel safer changing at the hotel than on the street, which we did later at Afra Mall and never had a problem.Hotel Alahlam: (€40/800SFG, including breakfast) We moved there as soon as we knew our way around Khartoum, it has much nicer rooms, a nice quiet garden and is located in a much nicer area of Khartoum with lots of restaurants in the neighborhood and offers free airport shuttle (you could even walk there) Please be aware this was January 2017 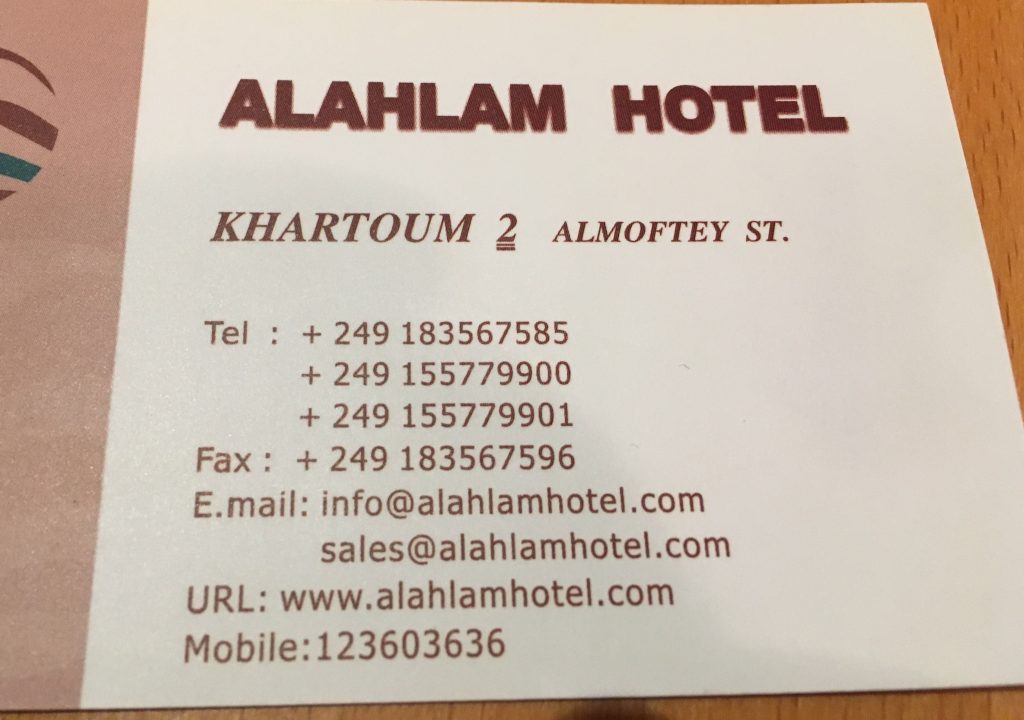 Business Card of our hotel 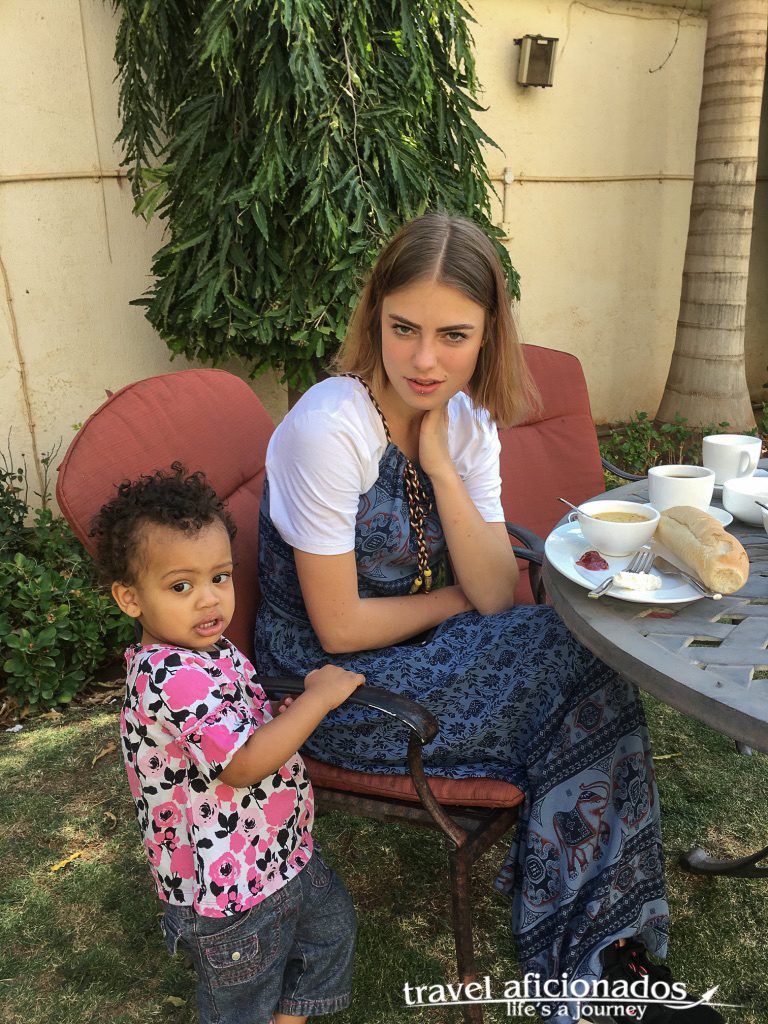 Breakfast in the garden of Hotel Alahlam

The famous Cafe Ozone is within walking distance, so are pizzerias and all kind of eateries. This area is much more pleasant than Central Khartoum, where Hotel Acropolis is located 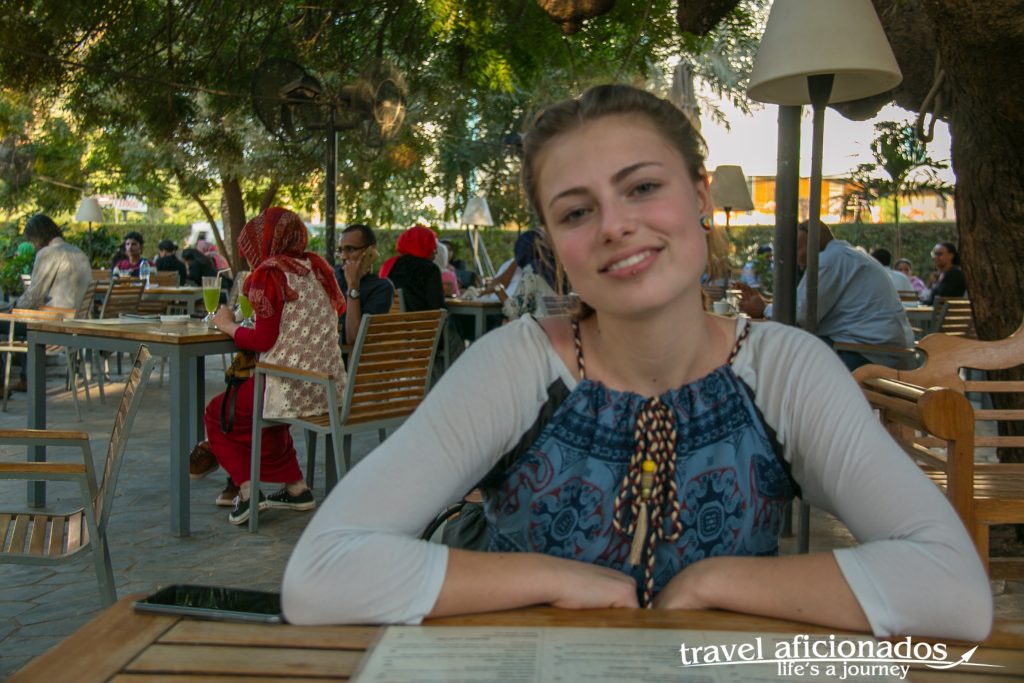 Al Salam Rotana is sheer luxury, Turkish Airline booked us into, because our flight was delayed for three days. 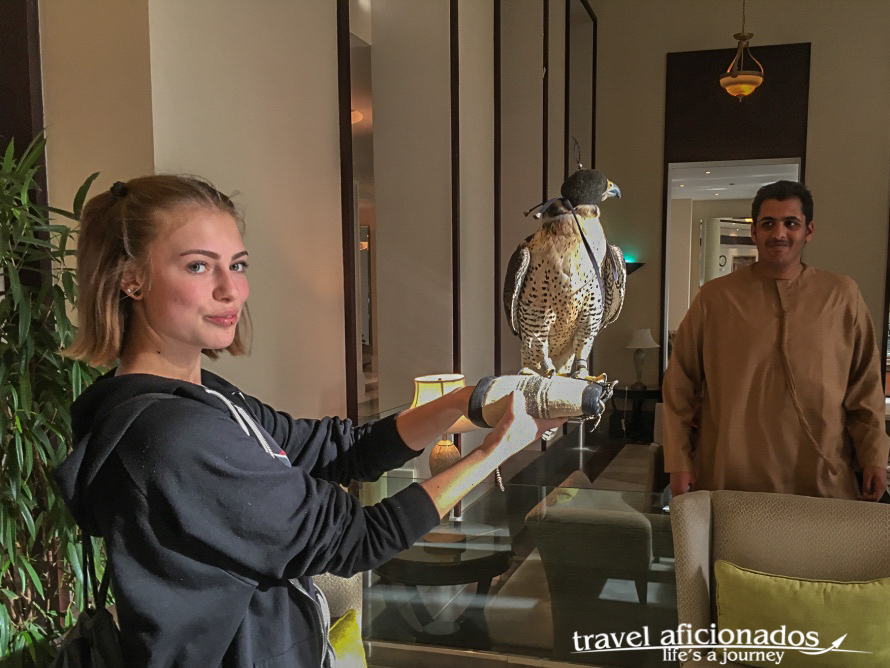 Accommodation outside of Khartoum

Shendi: Hotel El Kawther (€30), is the only hotel in his small town, right on the Nile, a three hours drive north of Khartoum, internet in the lobby 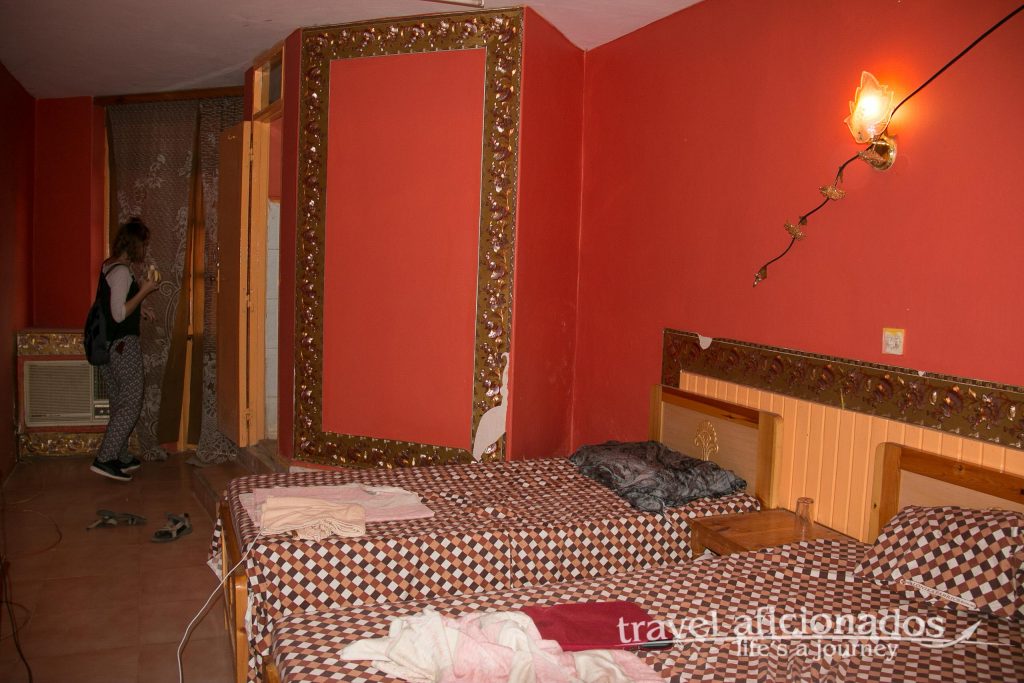 Our room at the El Kawther Hotel 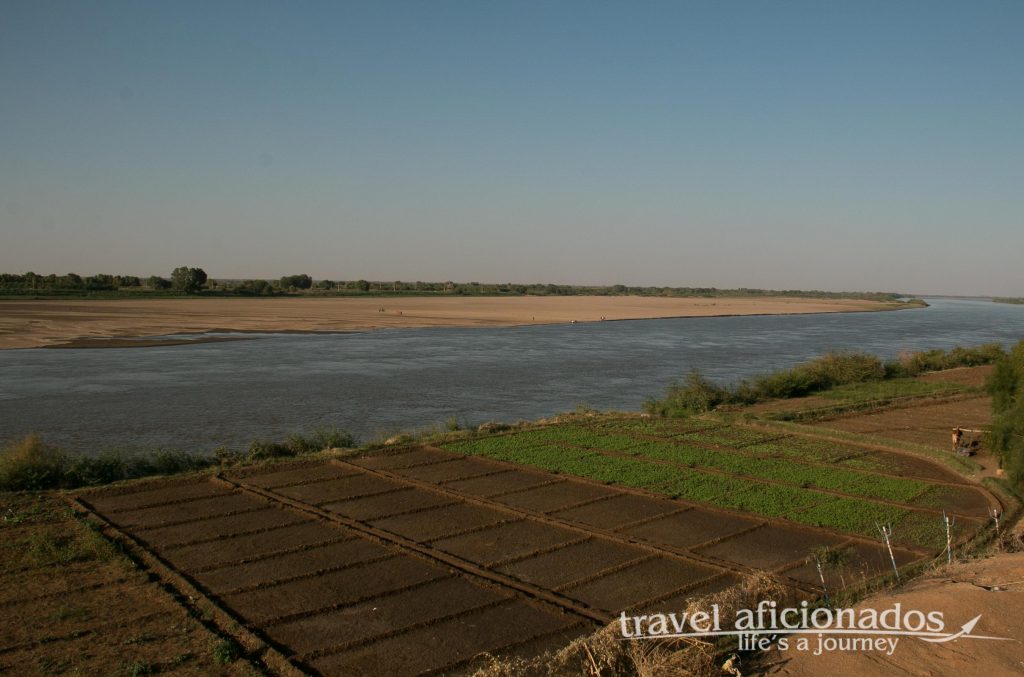 View of the Nile from the El Kawther Hotel 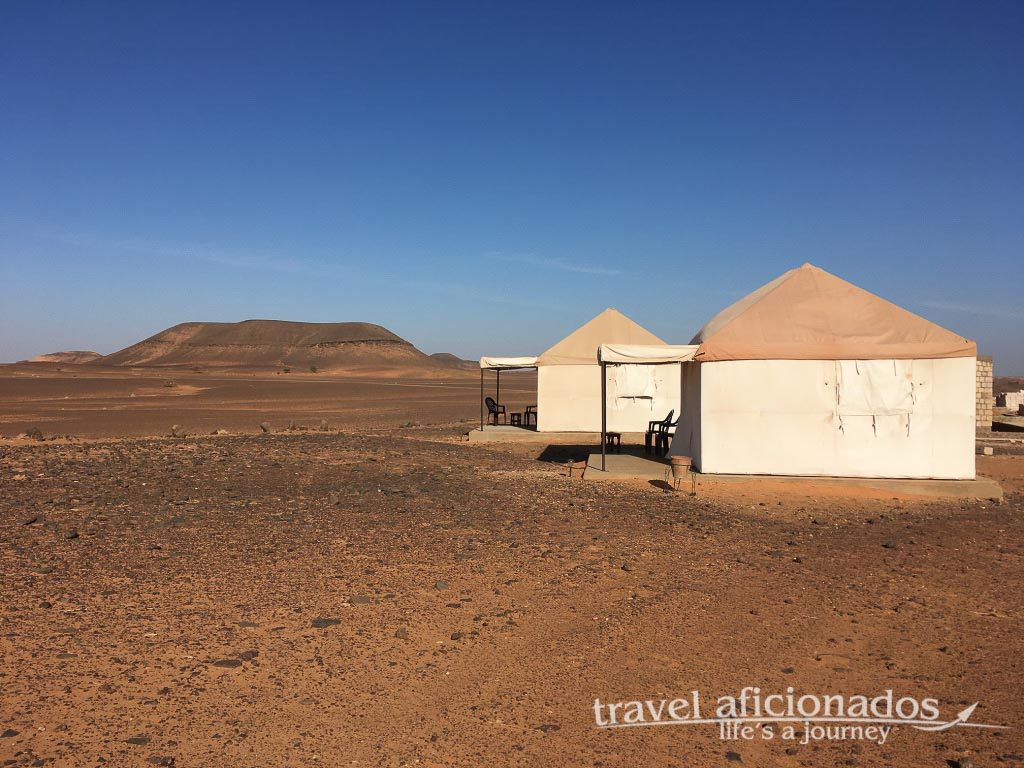 Tents in the desert with a view of Meroe

In Karima there are two hotels, a very basic one and a very luxurious one: Hotel El Nasser (€9 or 150 SDG) is very simple guesthouse, but the very helpful owner speaks English and has the most important information at hand. 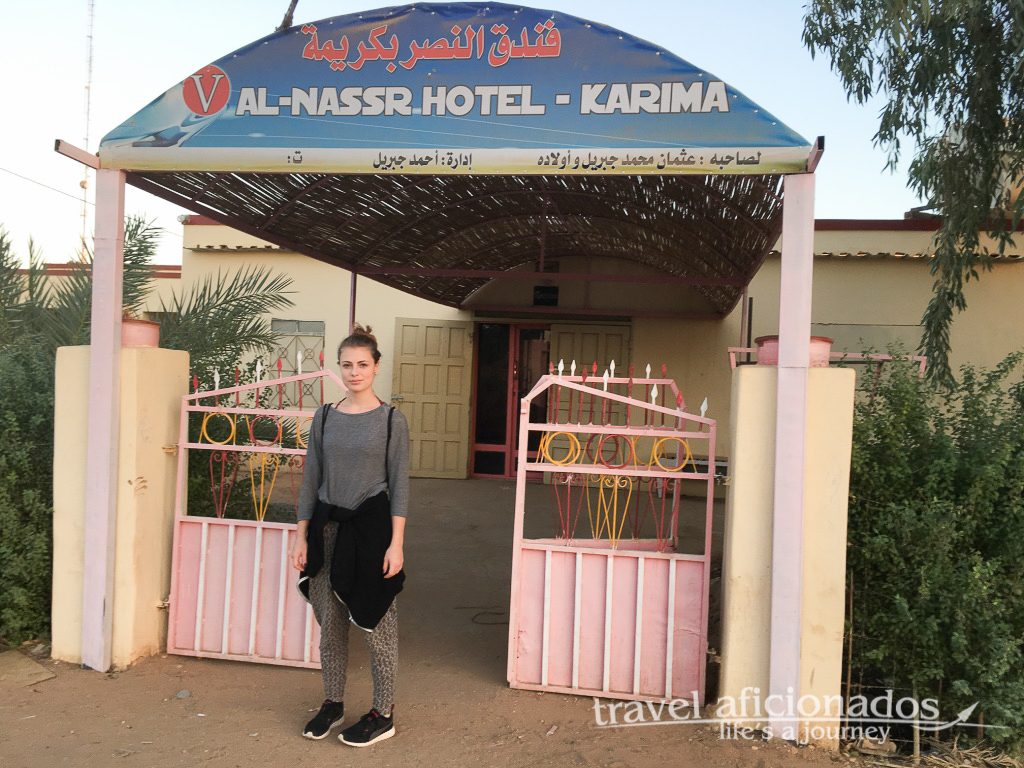 Entrance to Hotel Nasser, very simple but lovely owner who knows everything tourists need to know. 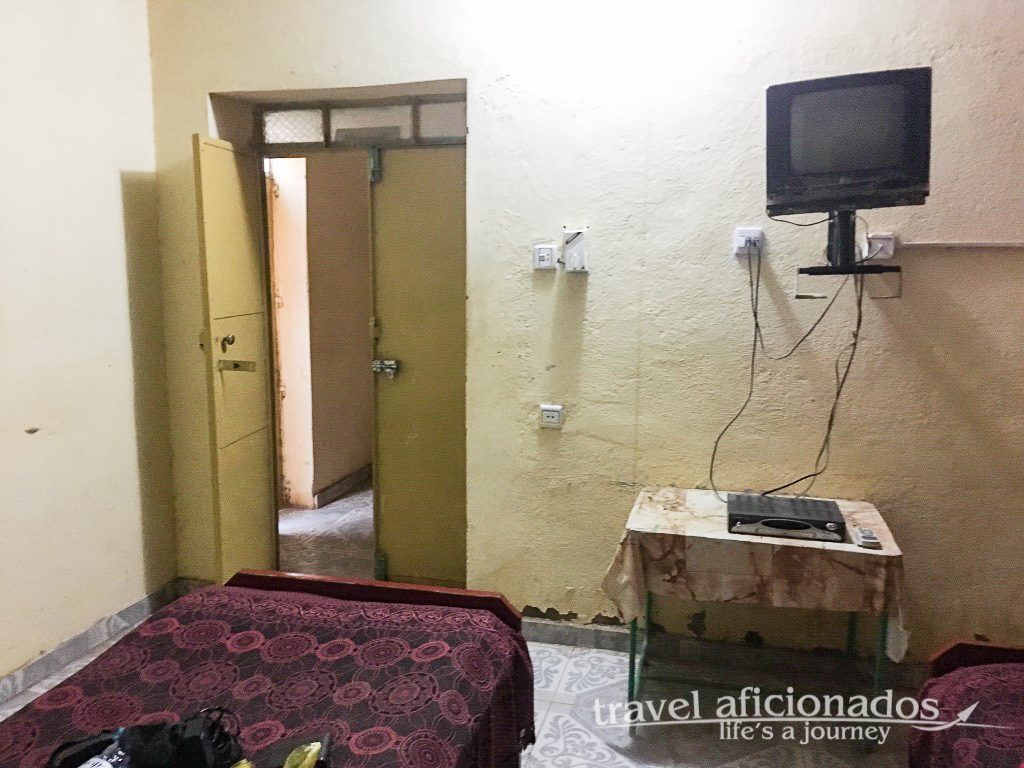 The luxurious Nubian Guesthouse costs €100/SDG 2000 if you pay in local currency, or €260 if paid in Euro/US. This includes three excellent meals. It is located right at  the foot  of Mount Jebel and near the Tempel of Amun. 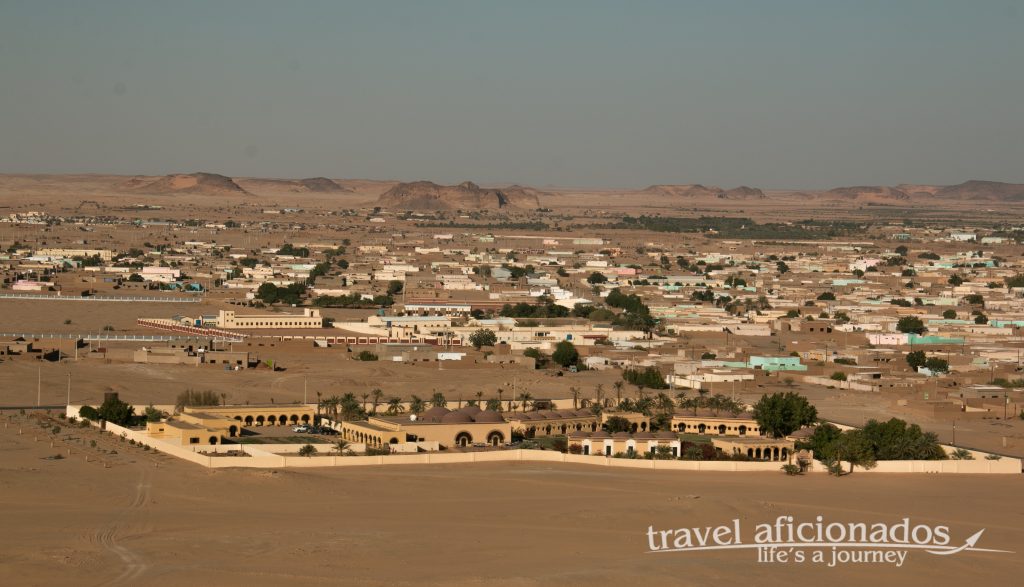 the lay-out of the Nubian Guesthouse, view from Mount Jebel 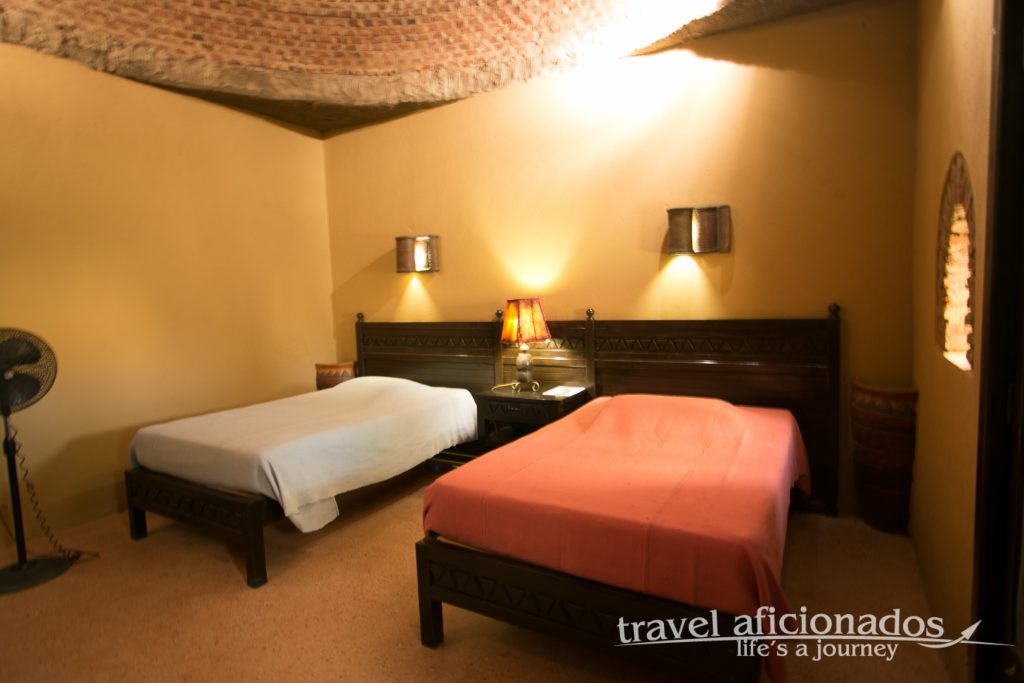 Rooms all decorated in local art, about 23 bungalows make up the resort

People approached us in the street, but in Khartoum we exchanged mostly at Afra Mall where we got 19 SDG, at Hotel Acropole we got only SDG 16,5.

In Karima there is hardware shop in the bazaar that serves as an exchange office. Once inside you face a stoic man sitting next to big safe pulling out plastic bags full of money. There we got 19 SDG for a Euro. 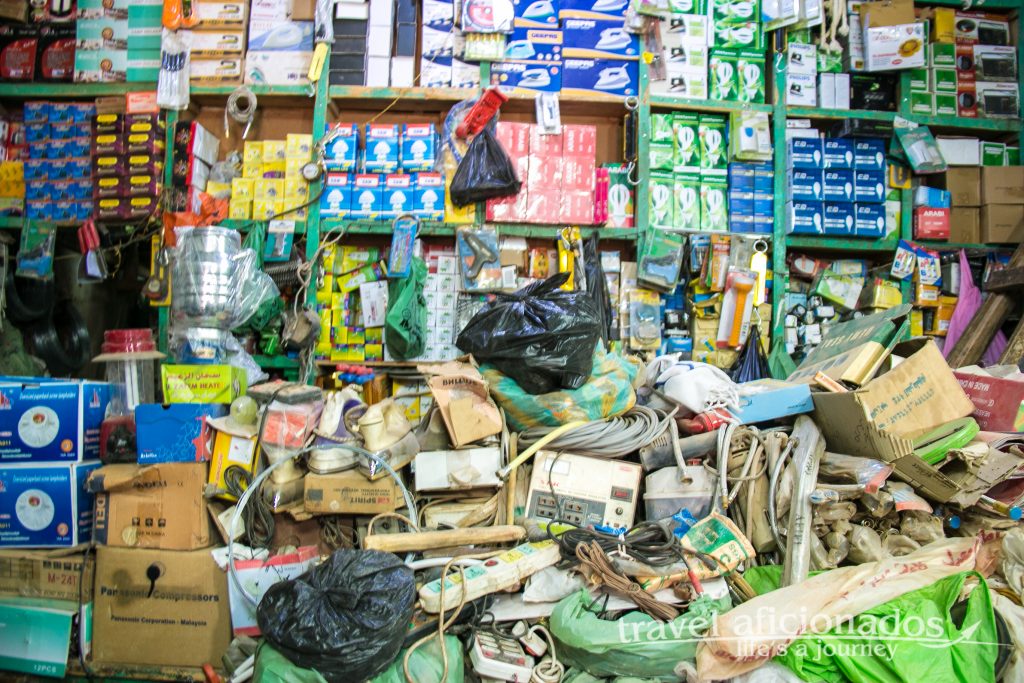 Just two examples: at the market in Karima we paid less than 1 €/15 SDG for a hug plate with falafel, bread and beans that fed the two of. 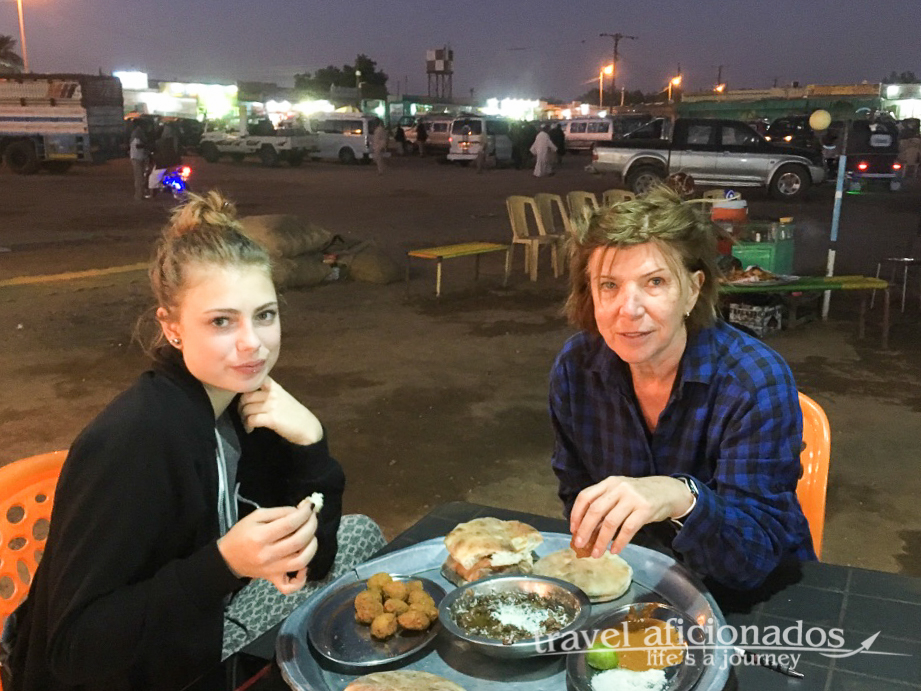 Local food at Karima market, for less than a Euro

Dinner at the Acropolis was SDG 100.- per person.

The information on money could have changed completely.

In order to apply for a visa you need an invitation. For individual travellers: Some hotels or tour operators in Sudan offer invitations if you stay with them or book a trip. This is a prerequisite for applying for a visa at your local embassy.

Officially you also need a travel/photo permit, which we got from the Hotel Acrople, it costs €75/SDG 920. When we travelled on public transport we were never asked for these papers, only when with a driver, who would hand a copy to the person standing on the road. It seemed a dead law that was mainly used by the tour operators to make money.

To sum it up, Sudan is very easy to travel on public transport, just try it. People are extremely friends and love to see visitors coming to see their country. Prices for food and accommodation can vary extremely, eating in local restaurants costs next to nothing, whereas tourist places charge more than you would pay in Europe for similar standards.  What we did not like was the immense amount of plastic litter EVERYWHERE, even in the middle of the desert. 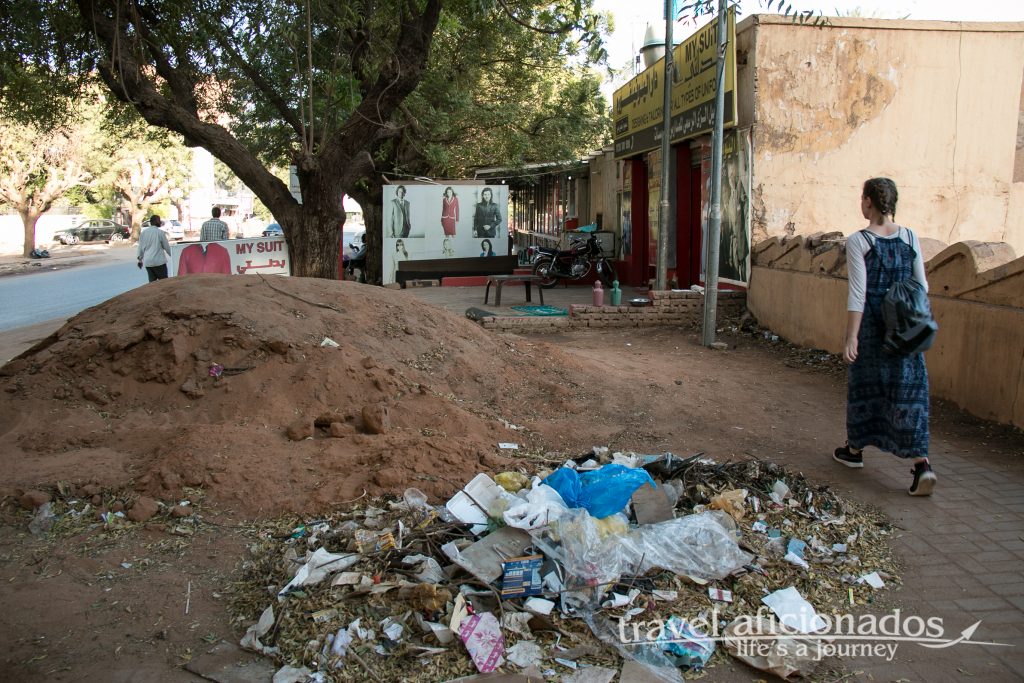 One Response to Travel Advice Sudan