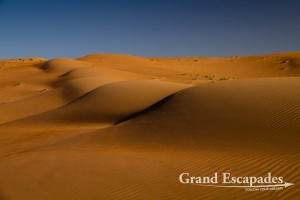 Wahiba Desert, 10.000 km2 of reddish dunes rolling all the way to the Indian Ocean! The simple beauty of this and the feeling of vastness leave nobody untouched. The more entrepreneurial Bedouins have turned the fascination with this endless desert into a successful business idea. Within a 20 to 30 kilometer range of the oasis of Al Wasil, various families have set up camps in the desert.

When we had difficulties booking a nice camp back in September, it slowly sank in that it would not be just the two of us out there… Nevertheless our hearts sank when a convoy of 10 cars gathered near a backyard garage in small Al Wasil. We were a bit tense: all these people, even large families with not less than three kids. Hadn’t be dreamed of quiet starry nights? To be frank, even our days we had fancied to be peaceful and silent. Such was the mood when we got ready for the trek to the camp. This included releasing air from all tires, putting those without a four-wheel drive in desert-fit cars and long discussions amongst the guides. 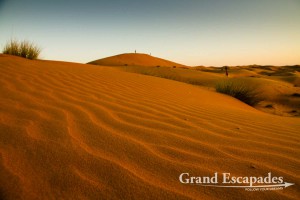 Our worst fears came true minutes after we arrived in our desert camp. The vast campground was overtaken by children of all ages, unpacking their sand box tools, balls and snowboards to glide down the sand dunes. None of this can be done without screaming. Even the hilarious sight of a red-haired, freckled British kid dragging the bleached bones of a long dead camel through the sand, we could not find particularly funny.

Heidi was so down that she could not even join the troops setting out to watch the sunset from a particular high dune further in the desert. Instead she wandered around the outskirts of our camp by herself. Only a few curious camels approached her, so she had what she had come for: absolute stillness! 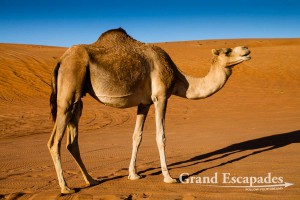 Once it got dark, we all stretched out on the large carpets and cushions placed around a huge campfire. To watch the fire eat it ways through the bizarrely shaped wood was quite a spectacle. Two musicians, one playing a drum and another a string instrument, prevented us from falling into a trance. All this was not a bit tacky and slowly we came to enjoy the camp.

We hardly noticed having no electricity. A full moon lit the way to our huts and the long-drop toilets on the edge of the camp. During this perfectly noiseless night, the frontier feeling slowly set in… 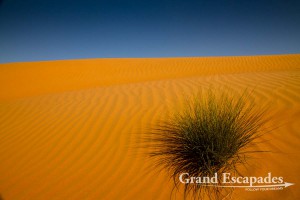 Al Mudayrib – A Myth
Luncheon In The Dunes