By Heidi Sequenz on 23. July 2019 in Lebanon, Middle East/Caucasus

Baalbek and Anjar are two very spectacular archeological sites about a two hour drive east of Beirut, near the border to Syria. Traveling there takes you through the wide, fertile Bekaa Valley. It has been cultivated over thousands of years and was once Rome’s breadbasket in the Levante. 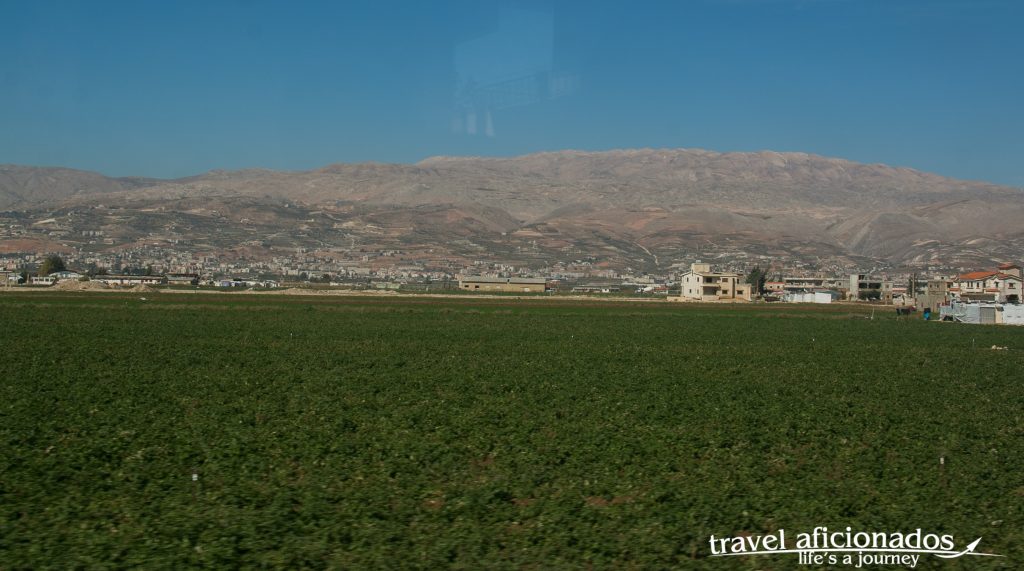 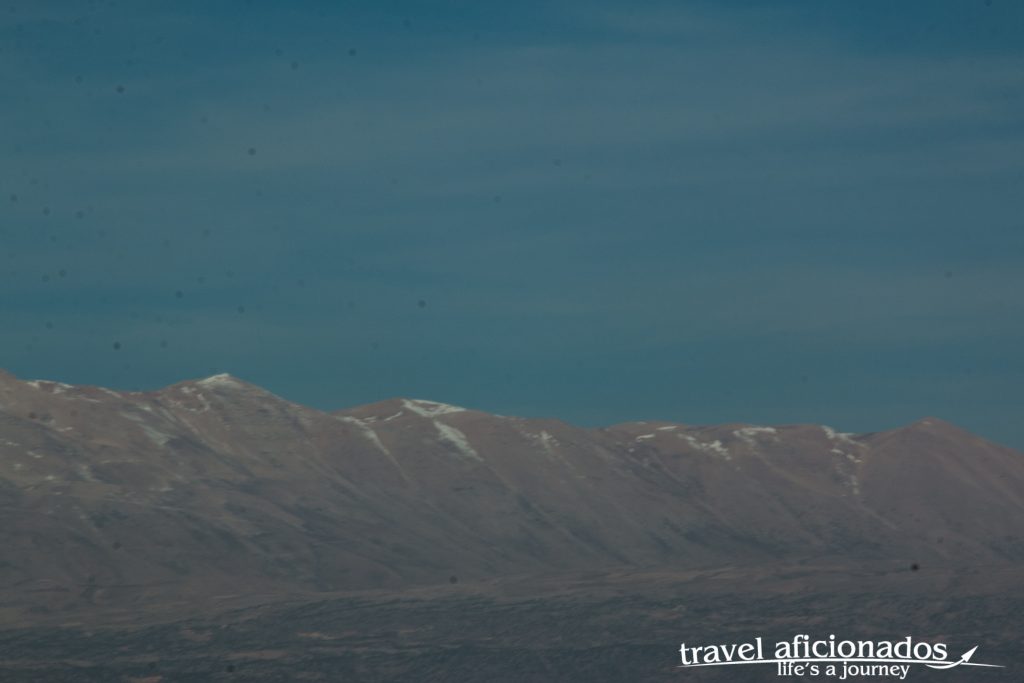 It was not always that calm. During my childhood and teenage years the name told me a different story. The many wars between Lebanon, Syria and Israel brought this part of the country in the international news and into my living room in Austria. It was through that flat valley that the Israeli jets approached. When I finally set my eye on it so many years later, it was the most tranquil place. We had left early morning from Beirut to avoid the traffic and reached the top for the sunrise. During this two hour drive we passed endless fields and spotted some of the camps where Syrian refugees still live in tents. 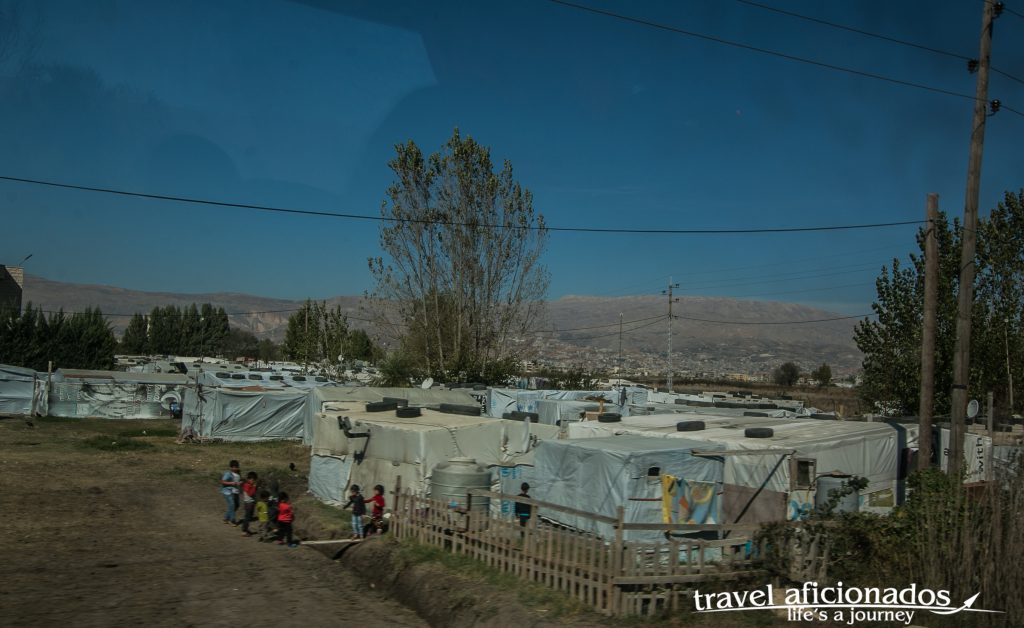 All government website mark the Bekaa Valley an unsafe, due to the proximity to Syria, plus the valley is considered Hezbollah heartland. How does the tourist notice this? The black flags of its political party AMAL line the roads and Hezbollah T-shirts are for sale as souvenirs. 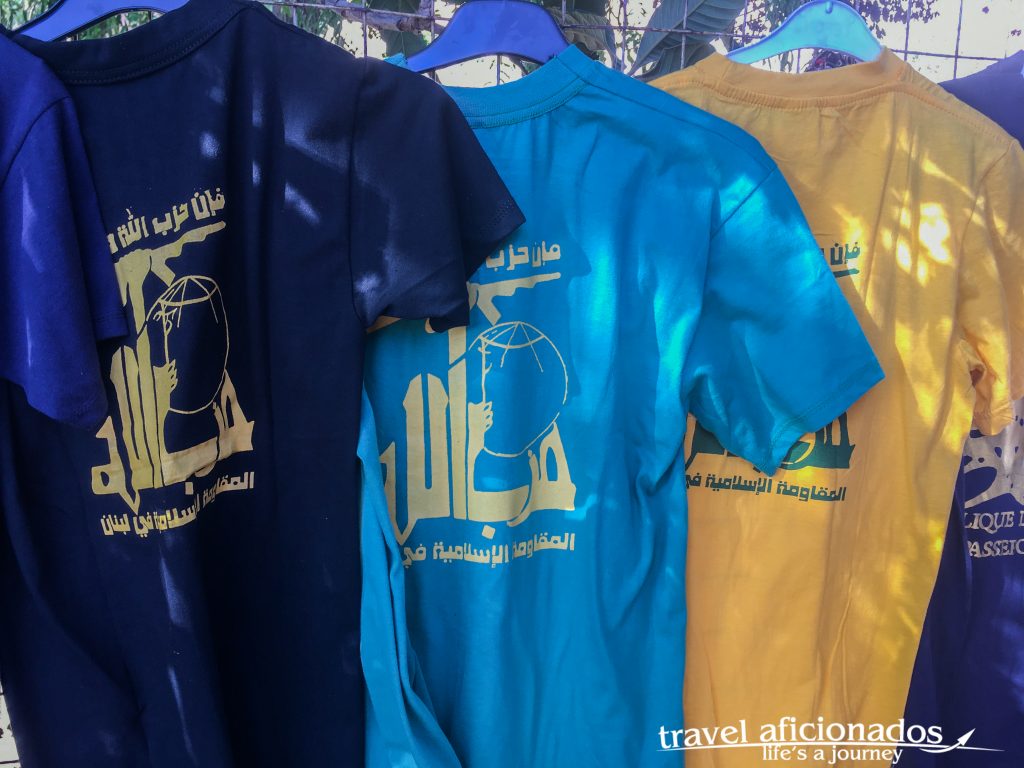 Hezbollah T- shirts sold as souvenirs. The conflict has become a bit nostalgic

I did not feel in danger for a second. The only difference to the rest of the country was that we passed some checkpoints where bored soldiers glued to their mobile phones waved us through. 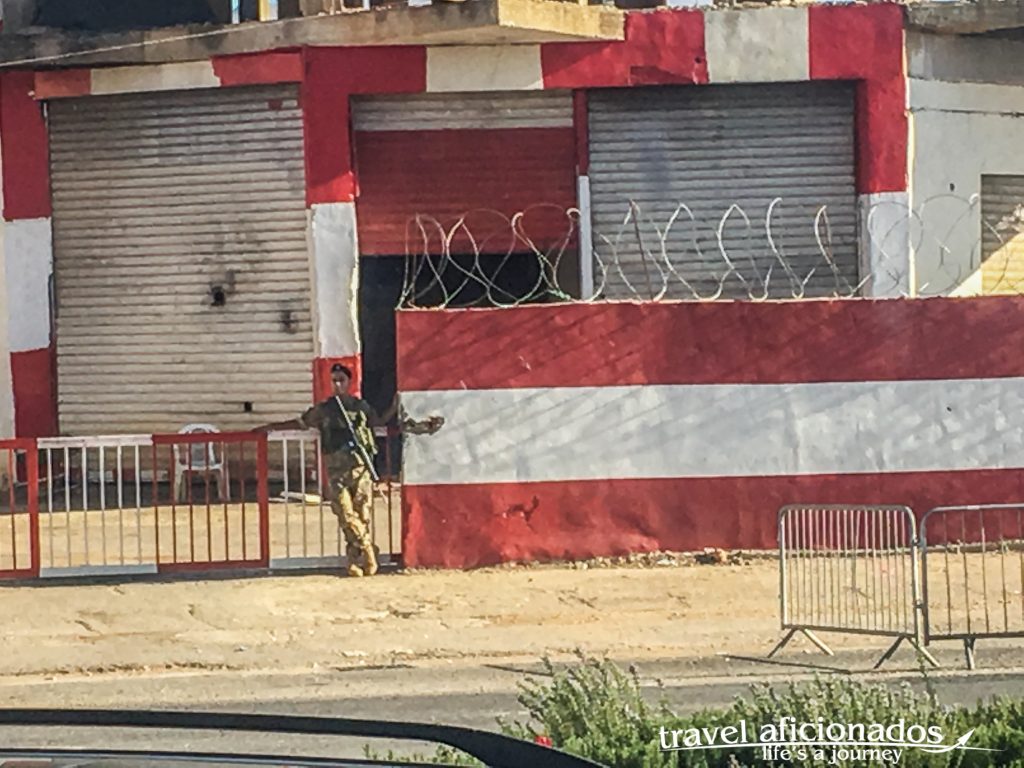 In the very center of modern Baalbek sits this enormous and wonderful Roman temple complex, one of the Middle East’s major archaeological highlights. Baalbek’s Temple of Bacchus is often described as the most beautifully decorated and largest temple in the Roman world, and it is certainly one of the best preserved. 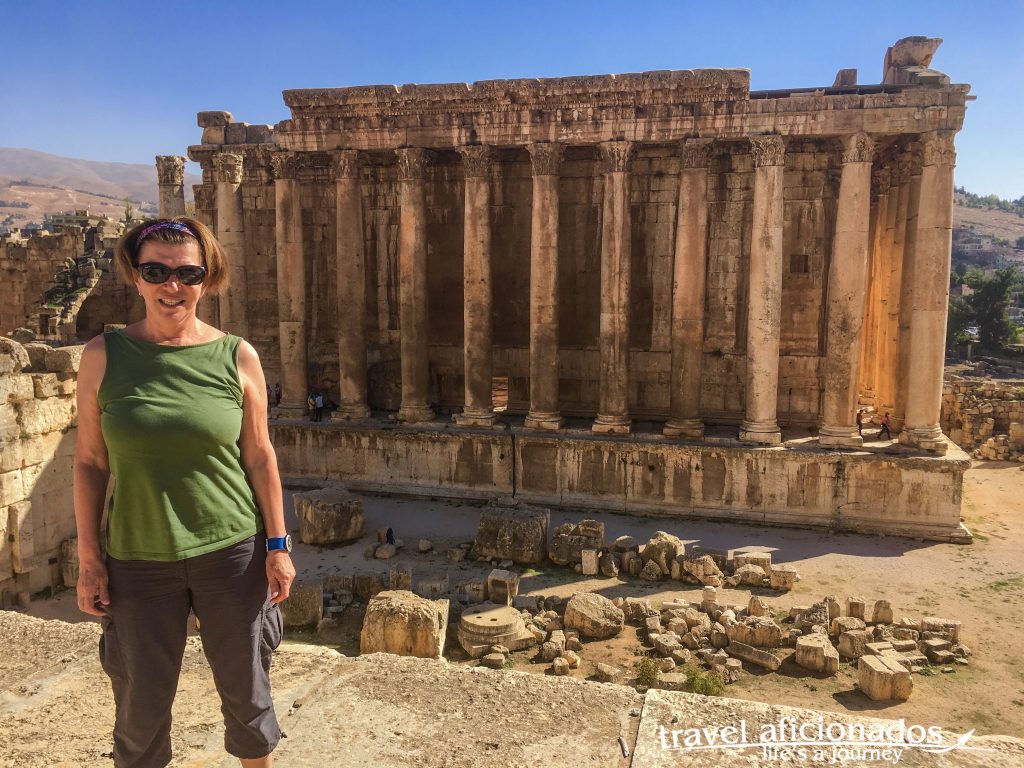 I overheard a guide explaining that the Romans built the most impressive temples in their provinces to show their power. Unfortunately I arrived in the heat of the day, which made the visit even in spring a bit uncomfortable and taking photos was a tricky business. 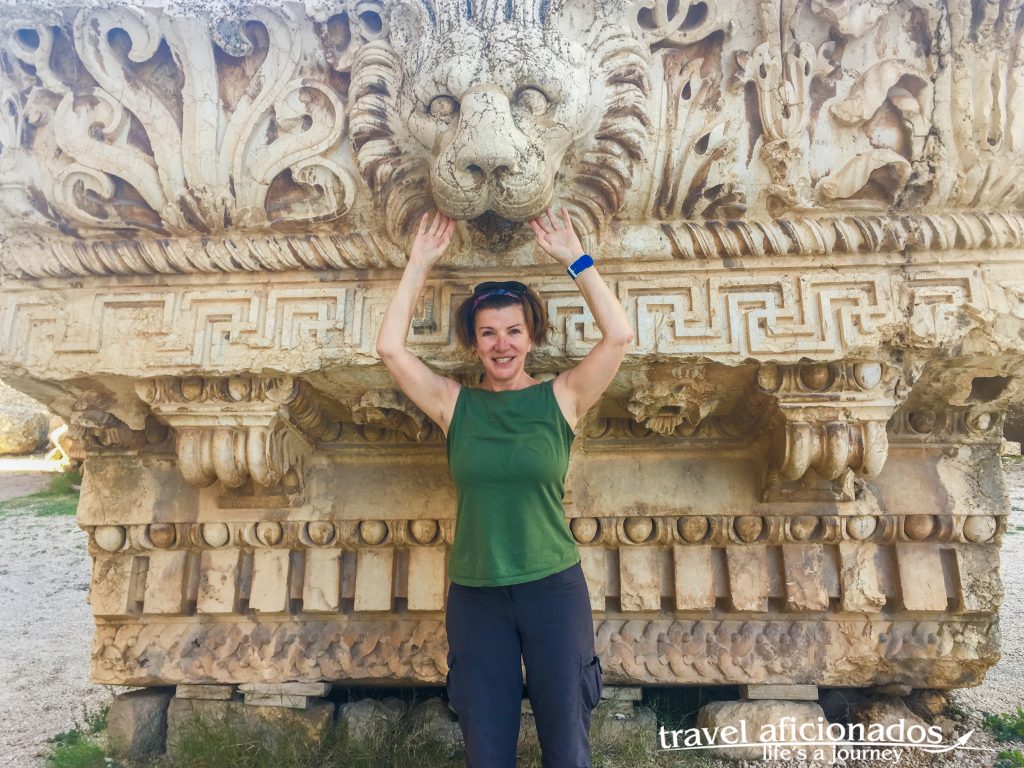 The much smaller Temple of Venus is opposite the main entrance and only a couple meters from modern Baalbek. 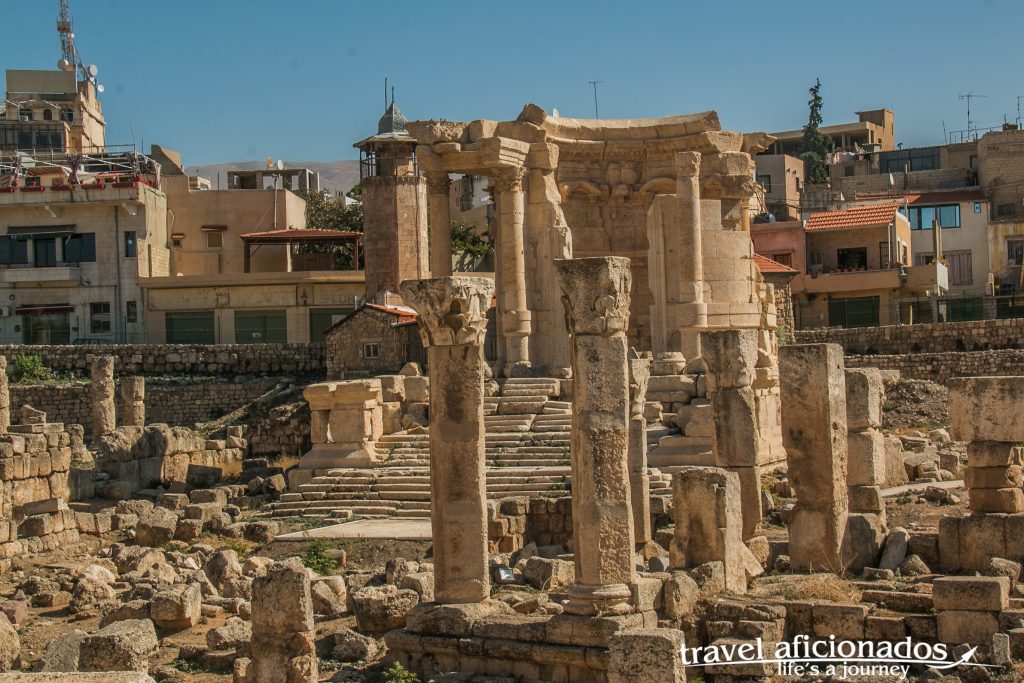 Balbeek – Temple of Venus, almost in the middle of the city

If I ever traveled there again I would stay overnight to be there for sunrise or sunset and above all to avoid the immense crowds that are rolling in on tour busses from Beirut around noon. 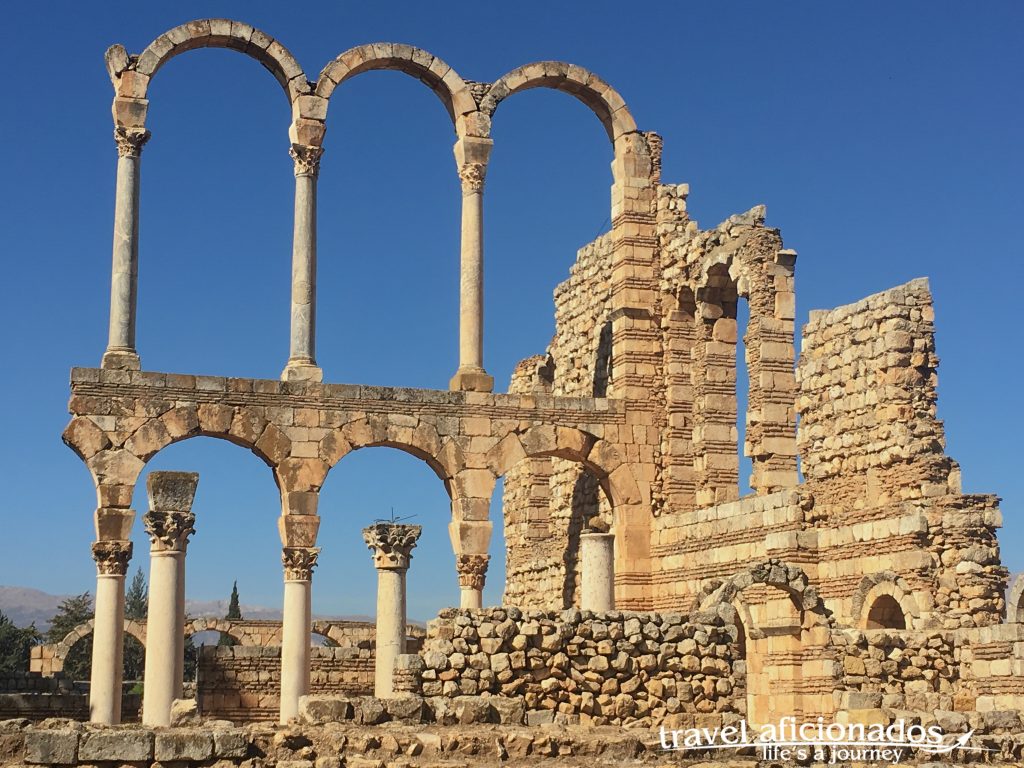 My decision of travel to Syria was made while sitting in the midst of the spectacular ruins of Anjar. The elegant beauty of this once palace-city, the absolute tranquility and looking directly into Syria created the very deep desire to see Umayyad Mosque in Damaskus. And certainly I was not disappointed when I travelled there six months later, in April 2019. 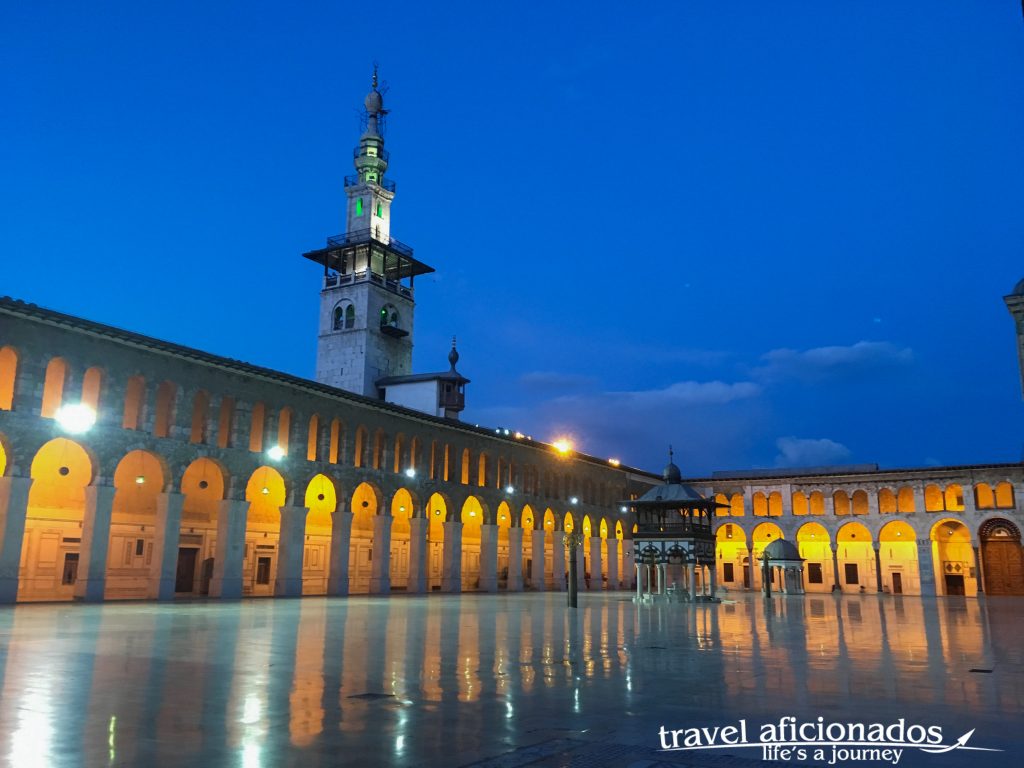 The city of Anjar was founded at the beginning of the 8th century AD and its ruins still show the  regular layout so typical for city planning under the Umayyads. The city once sat on the crossroads of two important trading routes. It is the only example of Umayyad architecture in present Lebanon and was only discovered at the end of the 1940s. Anjar was never completed since it existed only for a very short period. 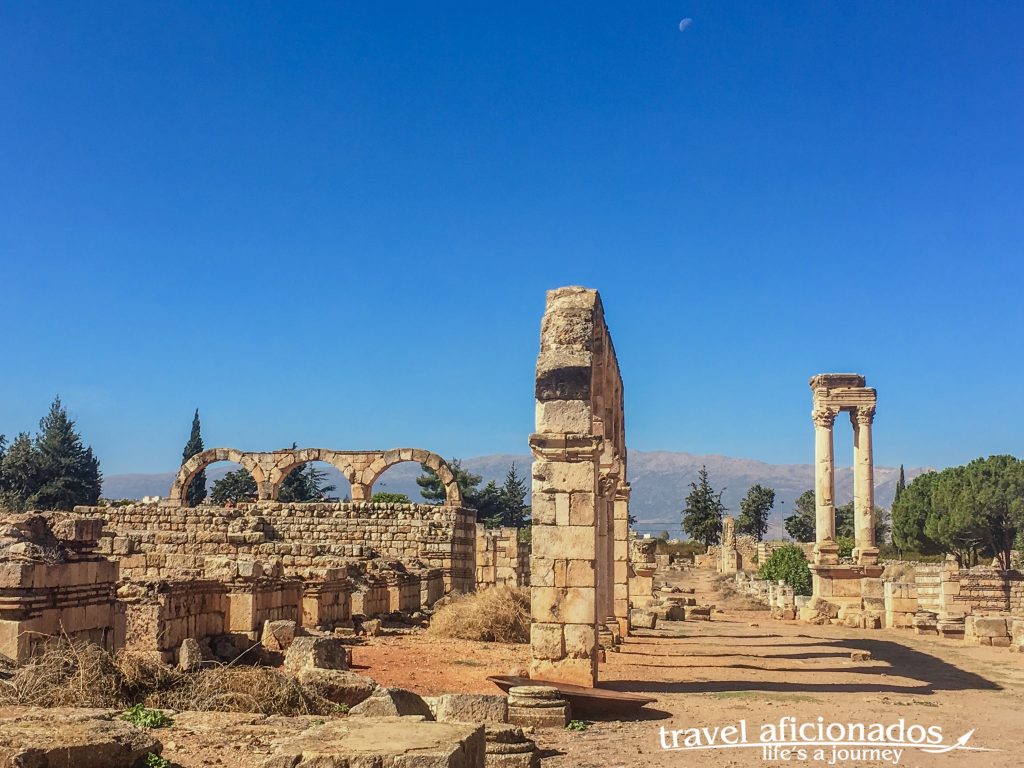 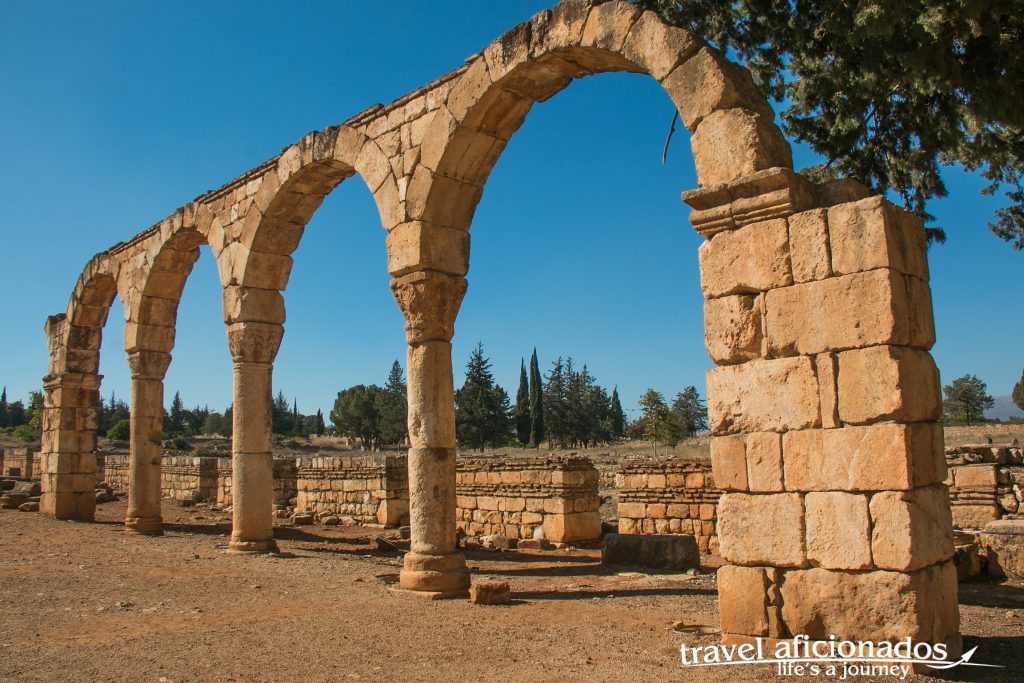 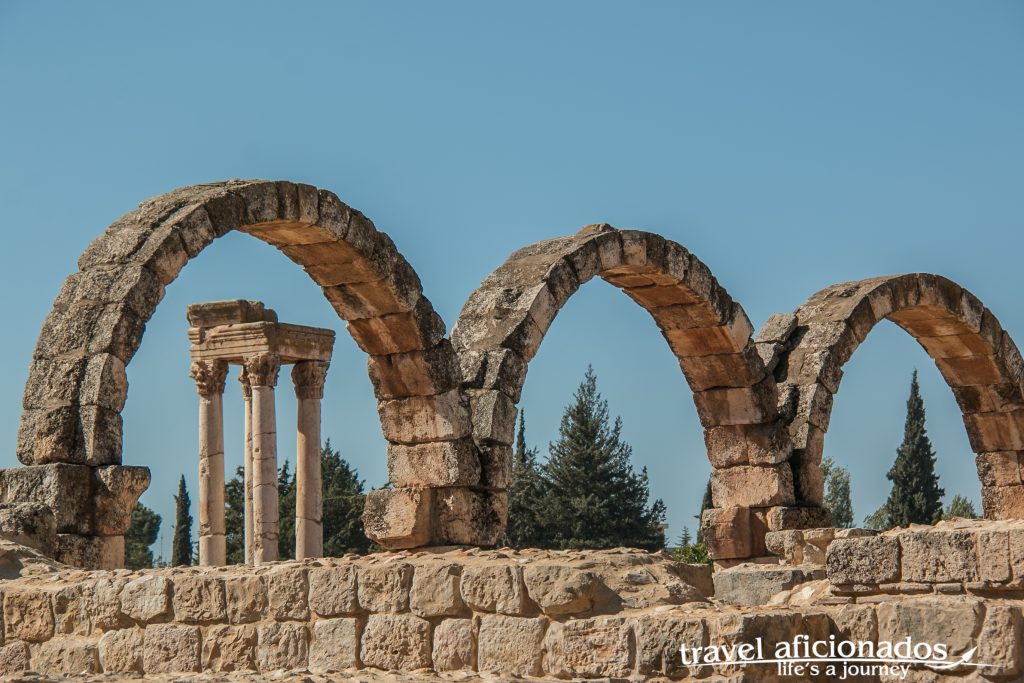 Don’t leave the Bekaa Valley without a visit to the numerous wineries. Ksara is one of Lebanon’s oldest and largest wine producer and was founded by Jesuit monks in 1887. Talking about oldest: wine was brought into the region around 2000 BC by Phoenician traders. The tour is very professionally done, a guide plus a multimedia show walk you through these ancient Roman-era vaults with rows of wooden barrels. 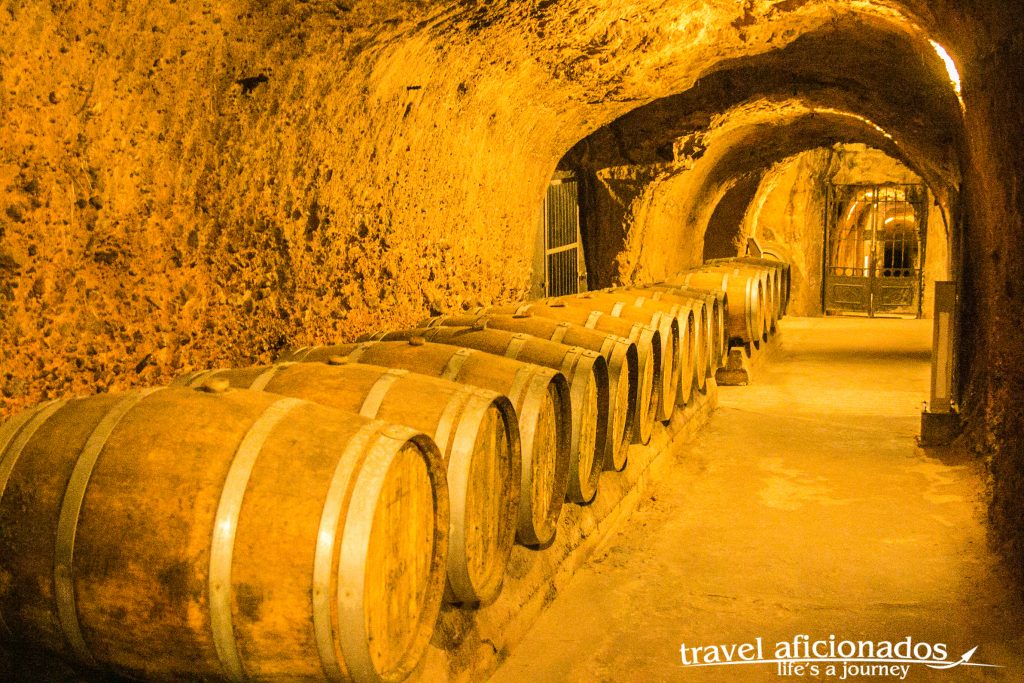 After that we were taken to a sample room, where various wine could be tasted. I felt a bit rushed and would have liked to stay longer, especially since a super nice university professor from Bagdad became my tasting-buddy. Briefly we sat in a kind of dining room full of well-dressed Italian women who wined and dined the afternoon away, but were ushered out when we did not order. 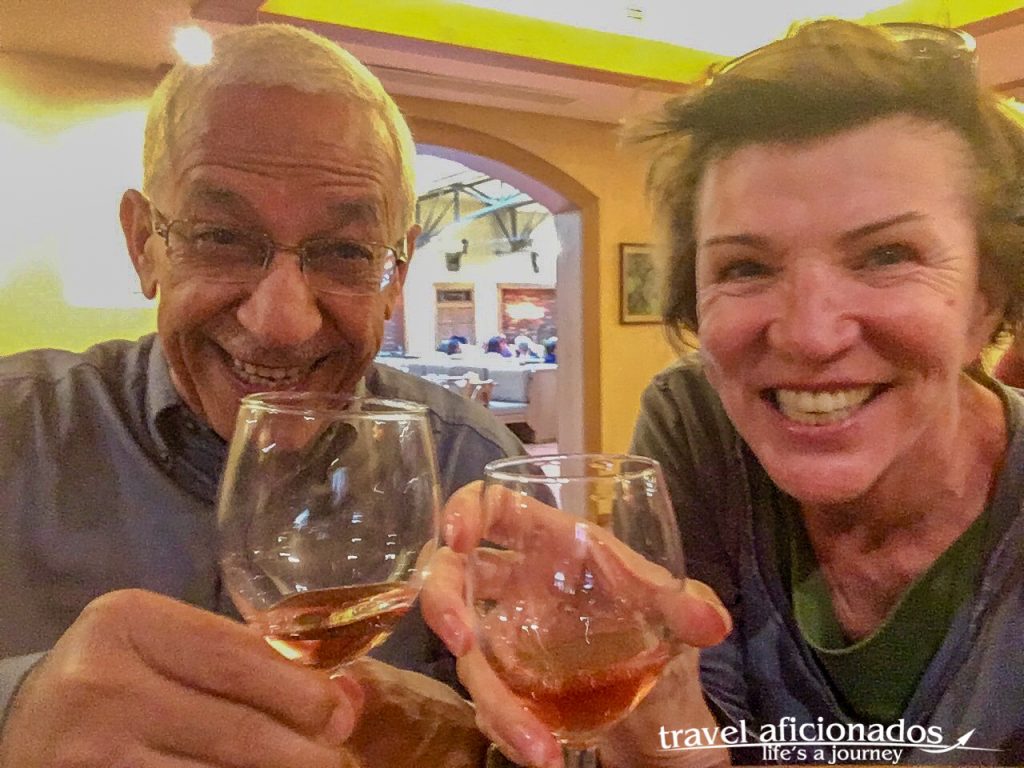 My drinking buddy is a university professor from Bagdad 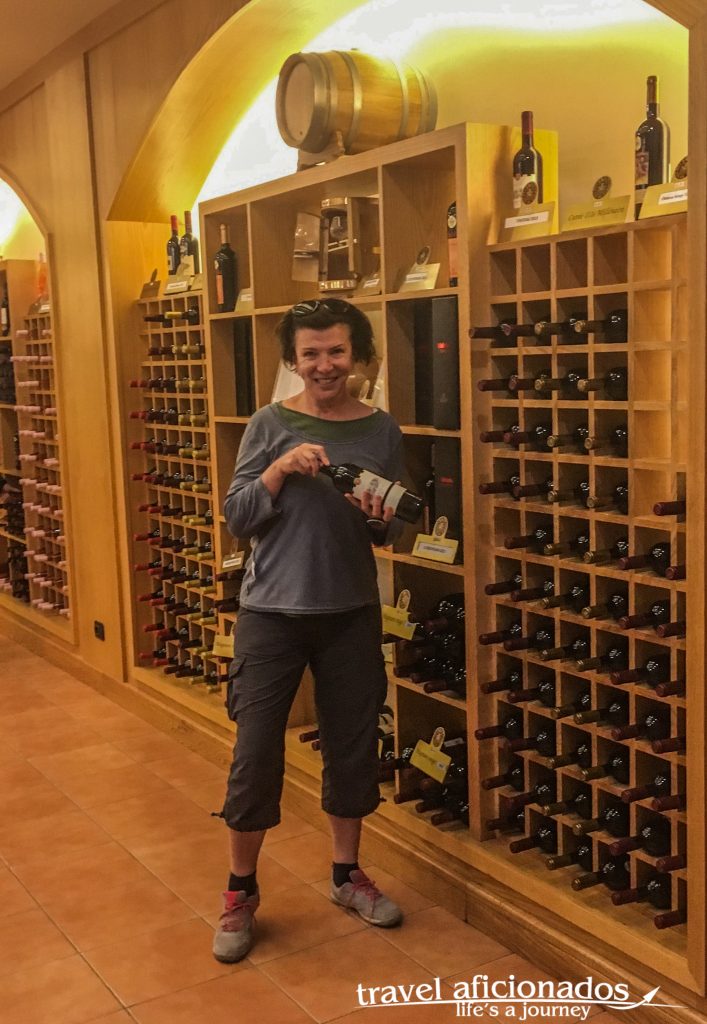 Travelling to Balbeek and Anjar: there is no direct bus from Beirut. Buses leave from Cola Bus Station and you need to change transport in the city of Zahle to go further to Balbeek or Anjar. It sound a bit complicated but it isn’t. The easy but more expensive way is to book through a tour-operator, a day trip usually comes up to US 95, including wine-tasting a Ksara Vinery or get a taxi with a couple of people for US 100$