What I remember most is the first view of Khiva early in the morning. We drove past the massive city wall. Nothing, absolutely nothing hinted at what lay behind. Once this 2,3km long structure was the inner defense line of Khiva, surrounding what is called “Ichon Qala”. This maze of narrow alleys, packed with madrassas, mosques, mausoleums and palaces is rightly compared to an out-door museum. 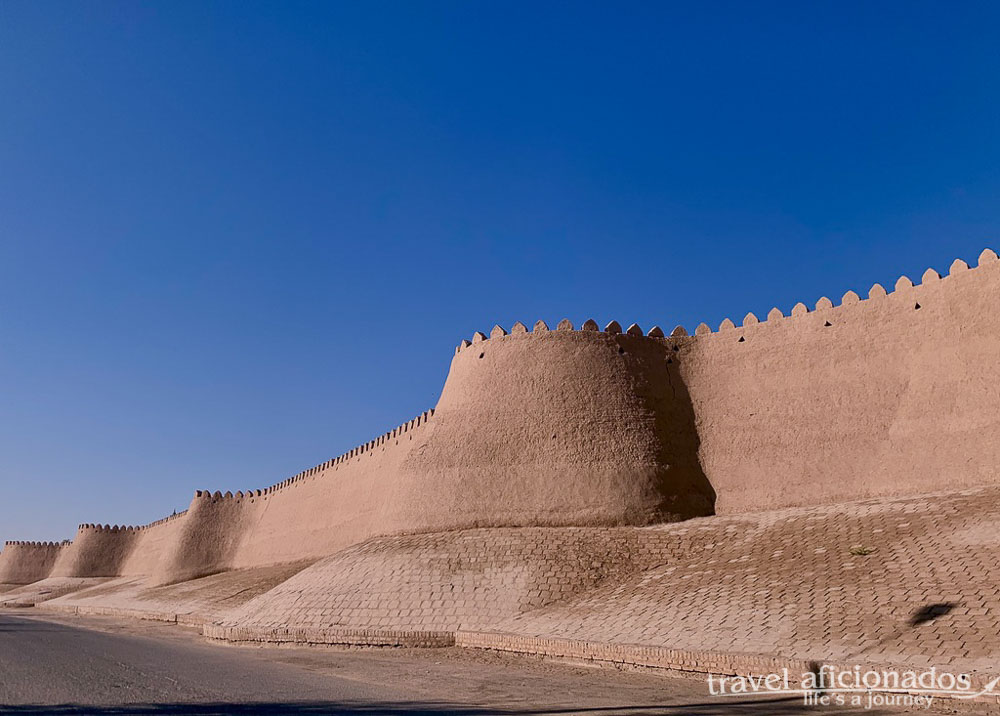 The Ichon Qala is where you find most sights, cars are banned and not needed. The area can easily be explored on foot. Although we were pretty tired travelling all night, we headed out immediately to check out this most remote Silk Road towns. 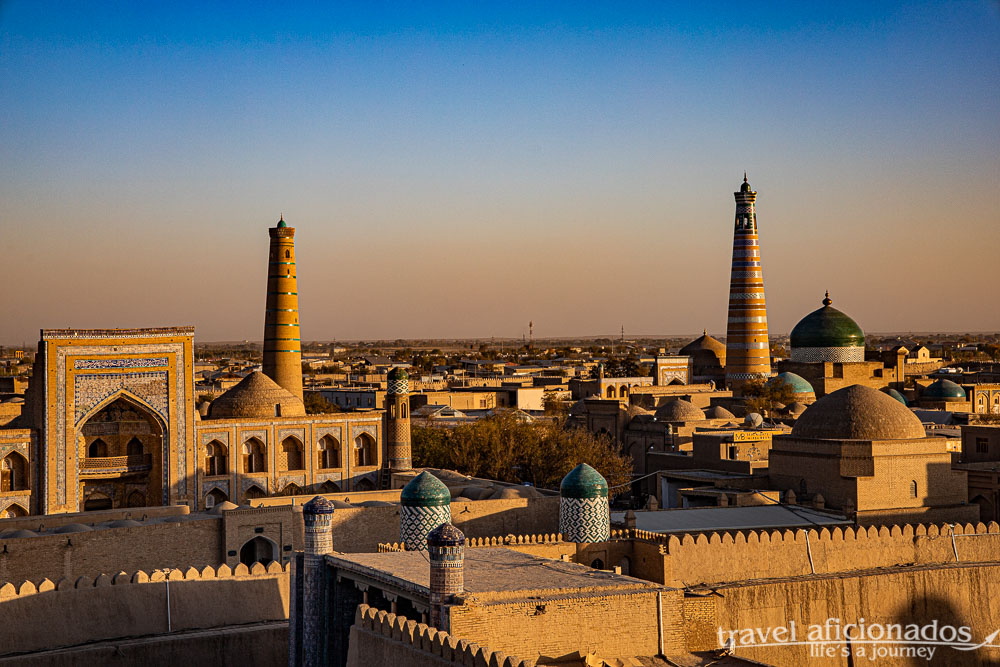 My absolute favorite was the unique looking Kalta Minor Minaret. It appears to have been cut off, but actually was never finished. The story told: Khiva’s ruler Mohammed Amin Khan wanted to build a tower so high that from the top one could see as far as Bukhara. Well, he was murdered before the minaret was completed. Besides its shape the colorful tiles  make it truly special. 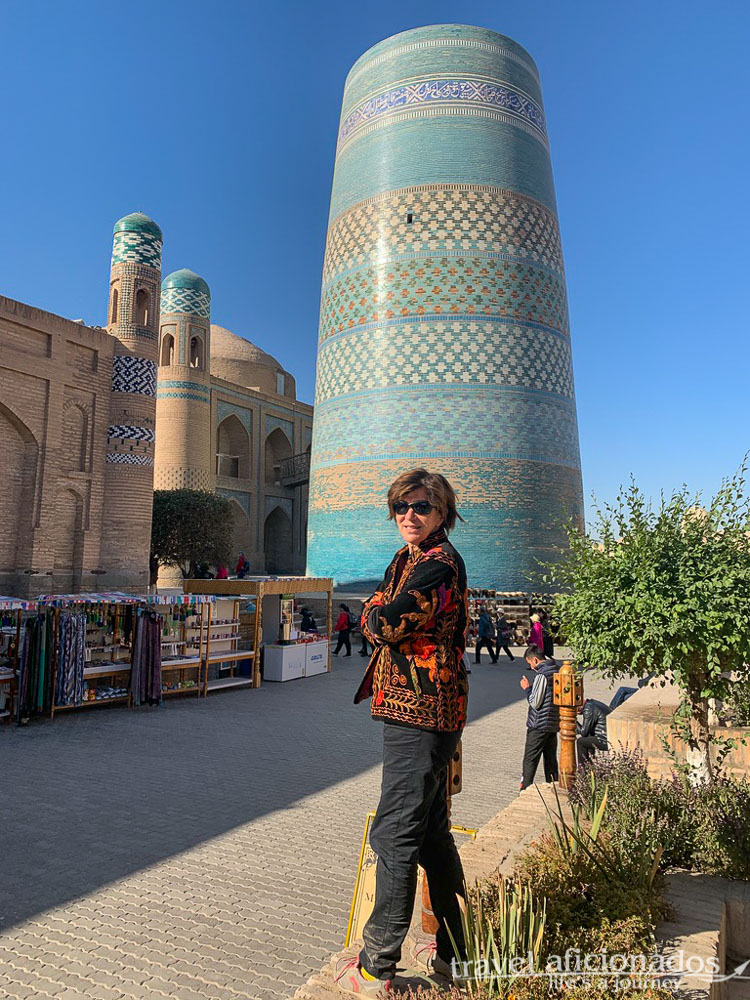 Another spectacular minaret is that of Islom-Hoja Medressa.  For a small fee you can climb the 120 steps to get the best view of  Ichon Qala. If you have time: do it twice, once for sunset, once for sunrise, especially if you interested in taking good photos. 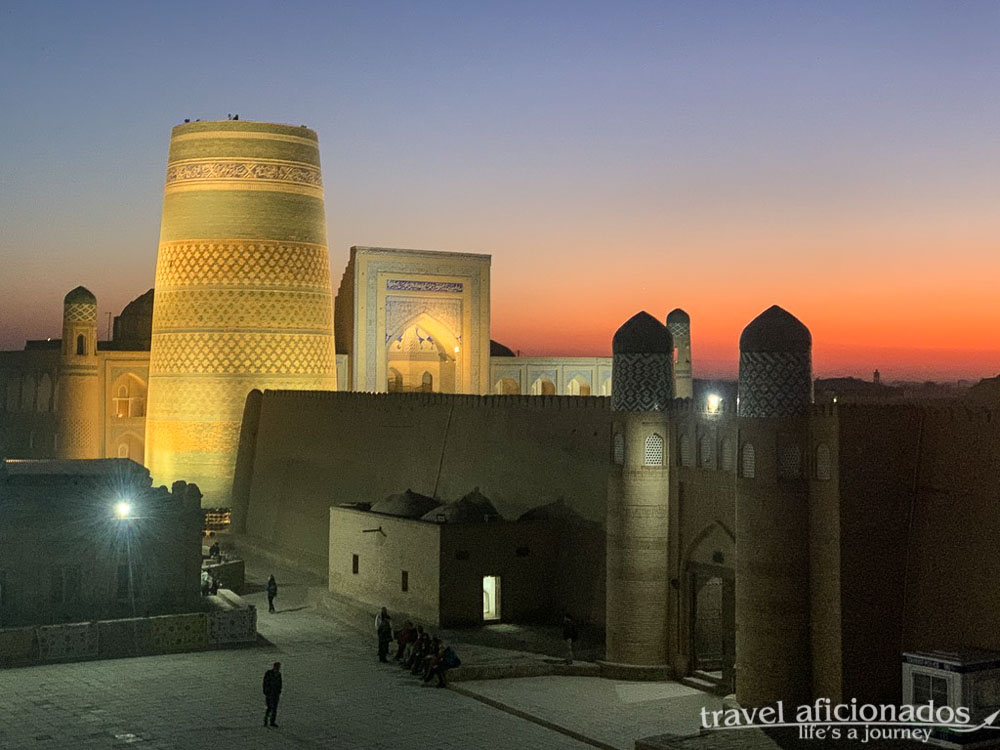 For those who like views and the sunset, Kuhna Ark, is the place to do so. This was once a fortress -palace incorporated into the thick wall. But, the view is only in one direction! Actually the terrace of the root-top Restaurant across Kuhna Art offers similar views, which makes it the busiest eatery in Khiva. 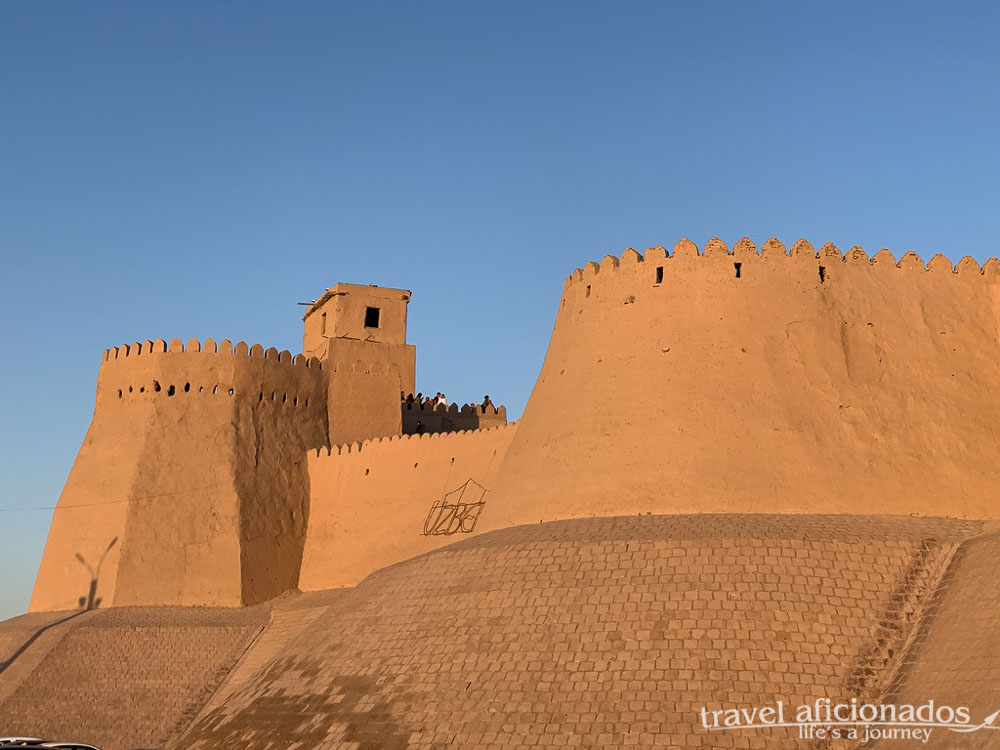 Kuhna Ark, once a fortress / palace, a good place to watch the sunset 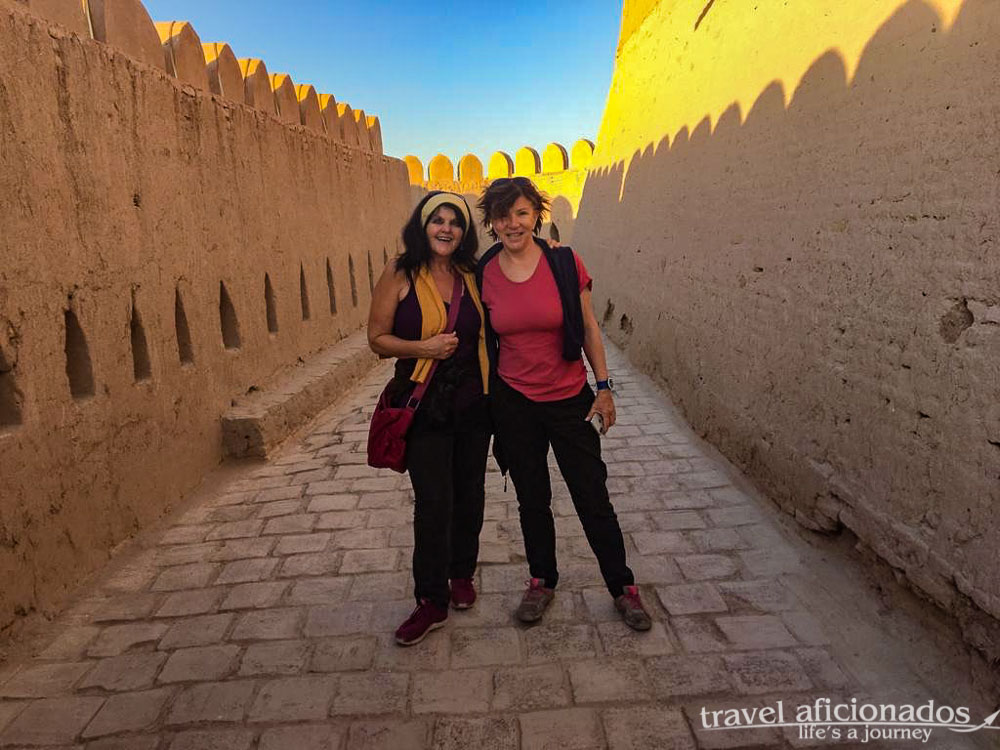 inside the fortress Kuhna Ark

The mosque I remember most is Juma Mosque! Its 218 carved columns support the roof of this 10th Century mosque. Back then this made it the largest mosque in Khiva. 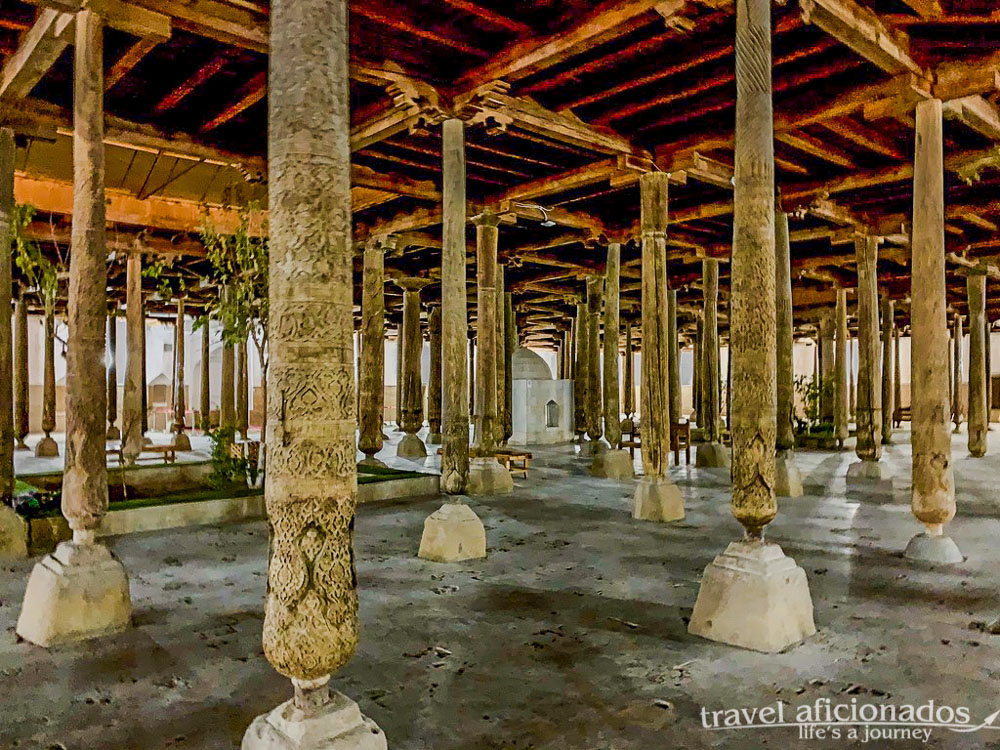 Khiva’s ambience is that of One Thousand and One Night. Most likely the vendors in ancient times were similar pushy. Stalls full of souvenir and handicraft are perched against the ancient walls. Most of it looks the same, so we suspected it has been made in the Uzbekistan section in some Chinese town. 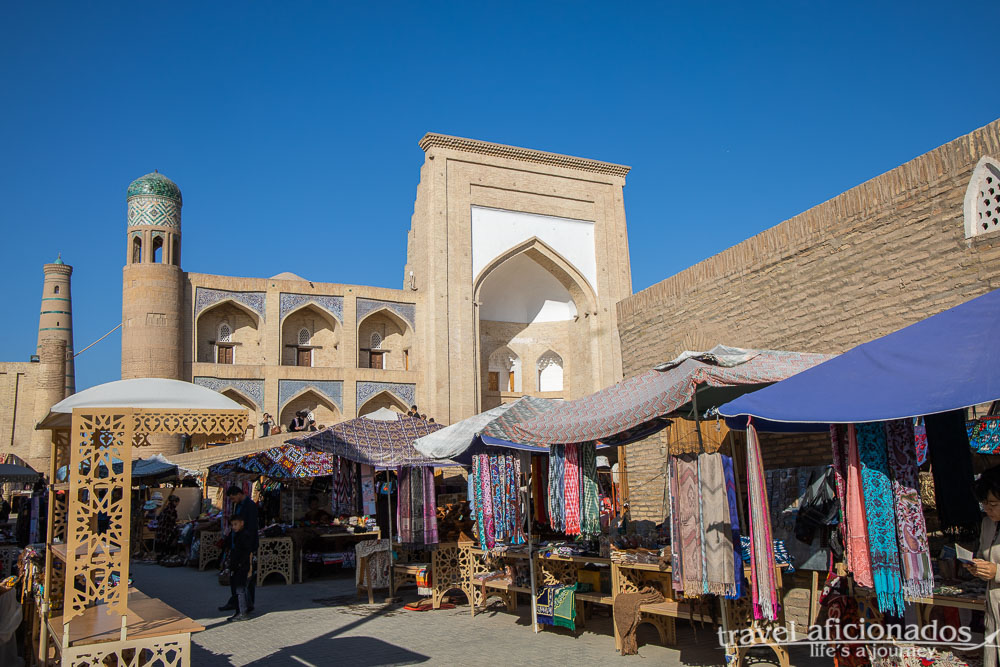 Most of our three days we spent just wandering around soaking up the ambience, sipping tea, leisurely visiting the sights and doing some souvenir shopping. 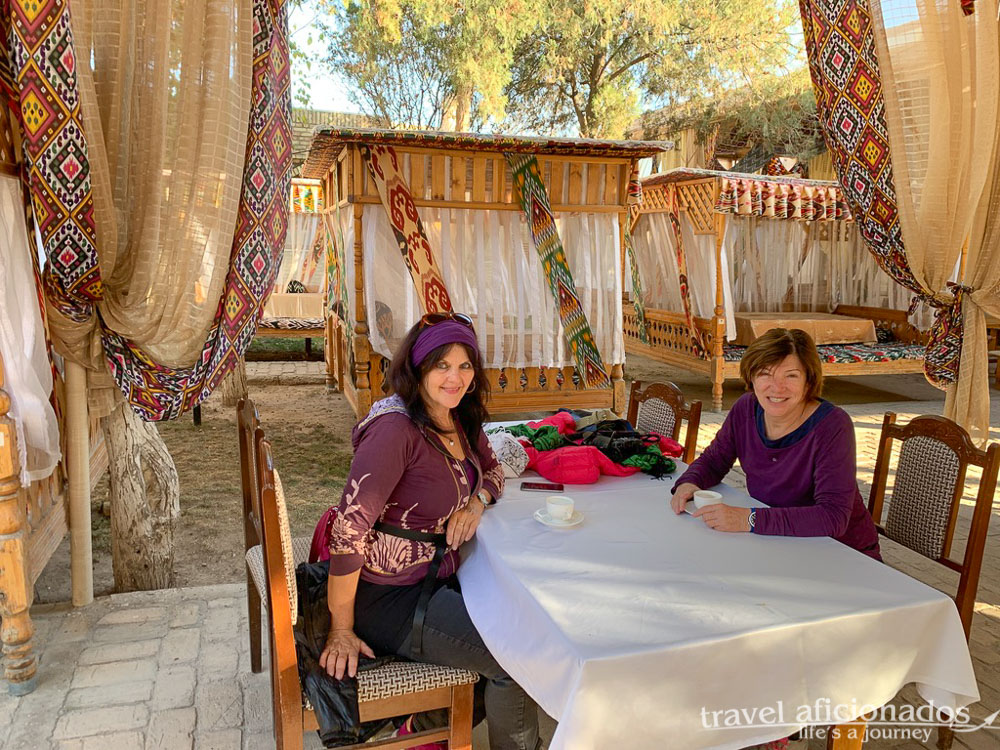 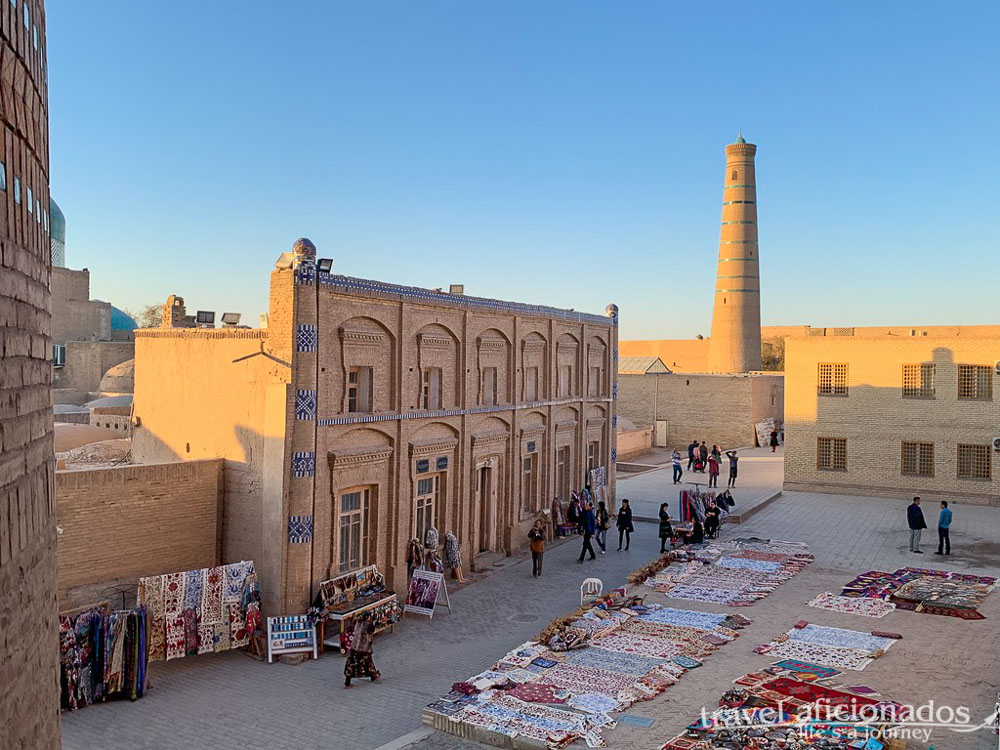 Of course we explored what is outside the city wall of Ichon Qala.  Simply to look at the impressive gates from this perspective is a must.  We  magined how centuries ago large caravans entered through the gates. Each one made Khiva richer by paying taxes at the very gate. A pretty fascinating pastime activity.

The eastern gate was used to enter the slave market, the small niches where the slaves were displayed for sale are still there. 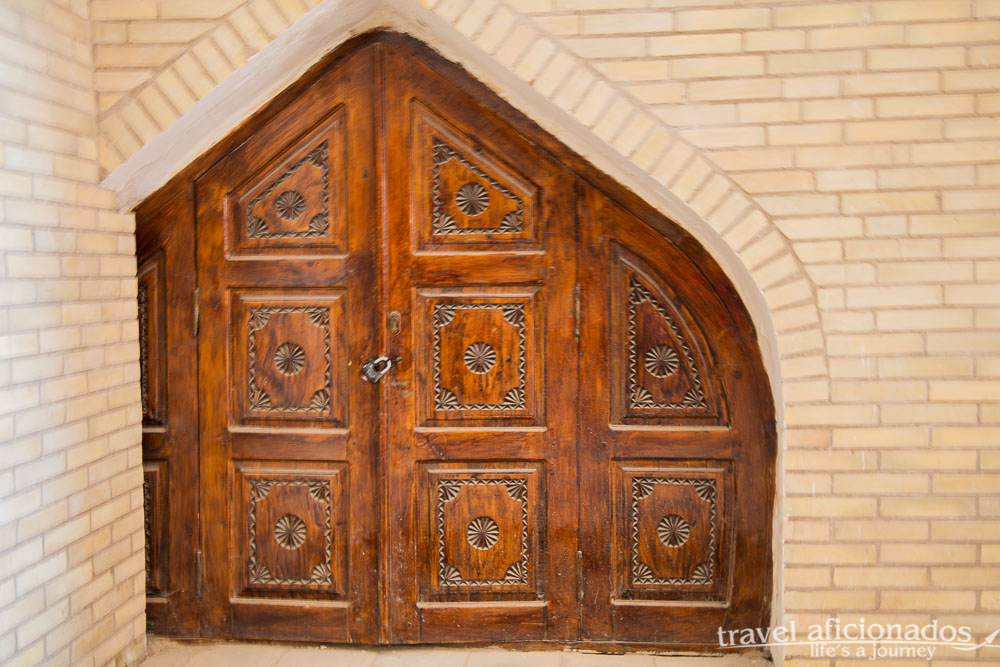 There is another outer city wall which we did not reach, but we strolled through the residential area of Khiva. That translates into dusty roads lined with flat-roofed, cube -like buildings and a few trees covered with dust. 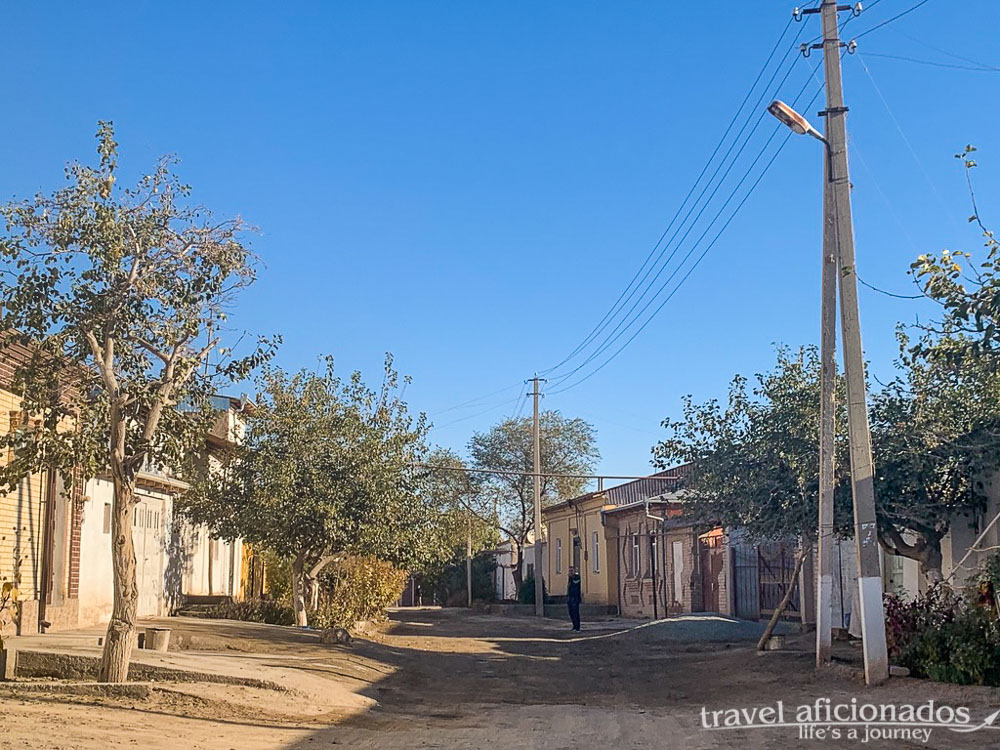 Our host arranged for a taxi to visit the ancient fortresses in the Khorezm Province north of Urgench. The area is called Ellip Qalas –  the 50 fortresses – but only 8 are in a condition that makes them worth visiting. You need a taxi or your own transport since the fortresses are far apart and off the main road. We focused only on three of the eight Qalas. Ayaz Qala, which has survived since the 4th century was the most spectacular, others like Toprak Qala were also a city, with a population of 2500. Also interesting was the trip there, we passed lots of small canals, the irrigation system for Uzbekistan’s notorious cotton industry that led to Aral Sea to almost disappear. Those who want to soak in the remote feeling a bit longer, a few jurts offer accommodation near the fortresses. 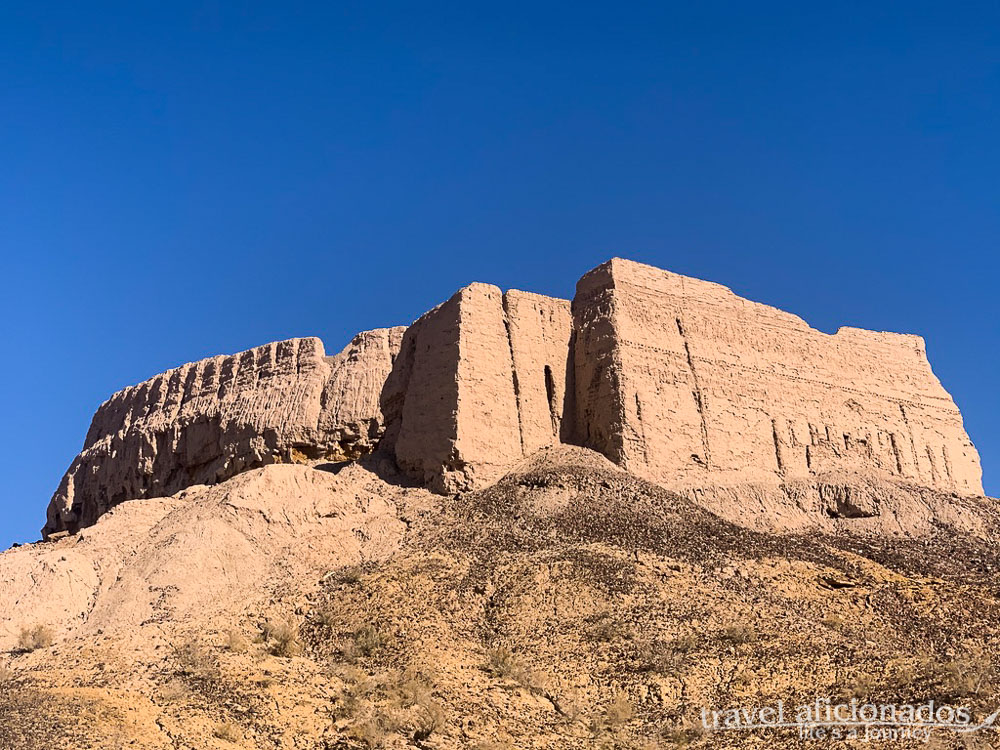 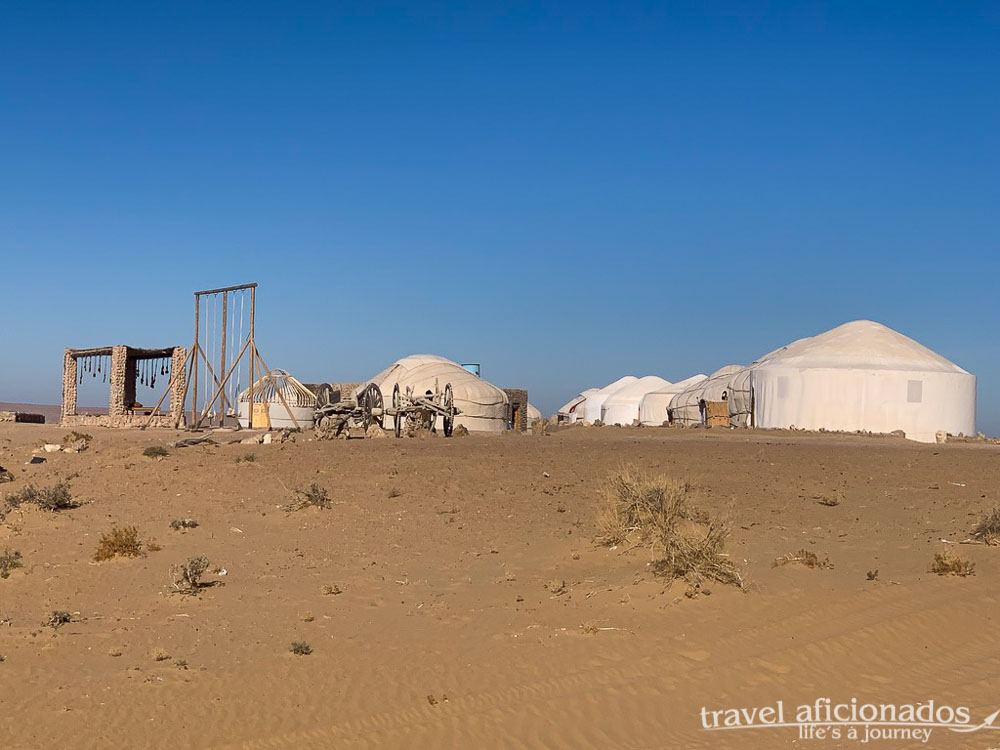 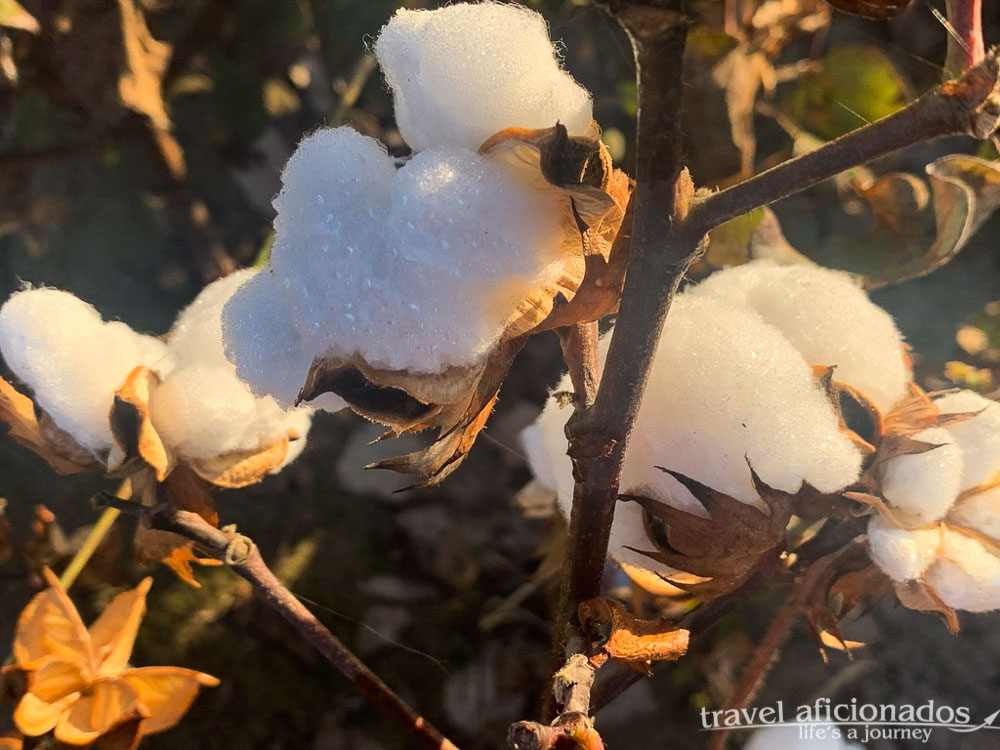 Travelling to Khiva: Everybody going to Khiva must pass through the city of Urgench. This is where trains, planes, busses arrive.  Khiva is about an hour drive south of Urgench, almost on the border to Turkmenistan. Mini-busses serve that stretch, but most tourists take taxis or have transport pre-arranged by their host/hotel. 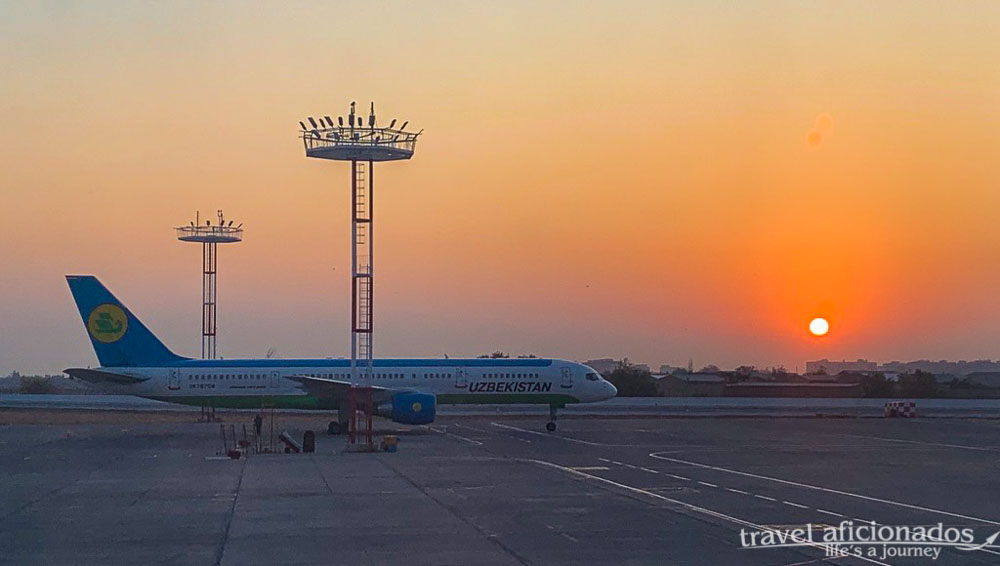 Arriving with the sunrise

Travelling to the Khorezm Fortresses: we visited them after leaving Khiva on your way to Buchara. Either you book the taxi all the way from Khiva to Buchara including the fortresses (US 80) or: a cheaper option is to visit the fortresses by taxi and catch the train in Urgench. 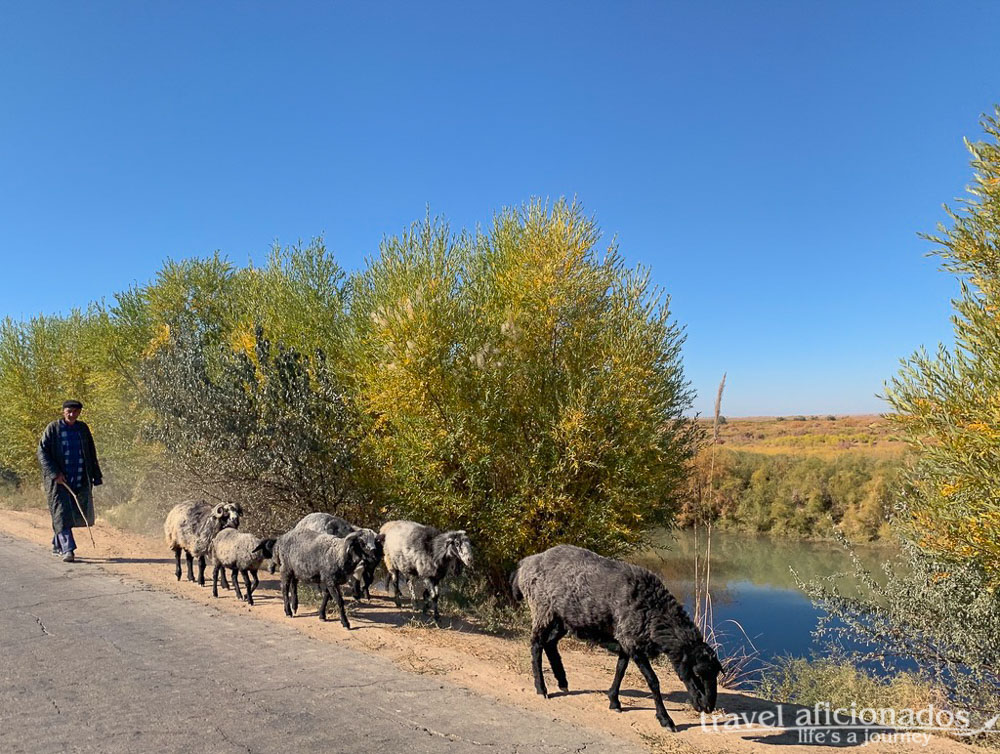 Scenery on the way to Khorezm Fortesses

Accommodation options are plenty in Khiva, in every price range, from B&B to five star hotels in former Madrassas. We stayed with a family inside the city wall, near the northern gate. They rent out several rooms of their house, have a little patio surrounded by a wall, like all other houses. The owner speaks English well and organizes onward travel or trips to the ancient fortresses of Khorezm.

When it comes to eating in Khiva, your choice are limited, all places within the Ichon Qala cater to tourists, don’t expect anything local. Our favorite was the busy rooftop restaurant, near the eastern gate. The view simply beats every other place.

To enter the Ichon Qala a set fee it charged, it worked like a two or three day pass. 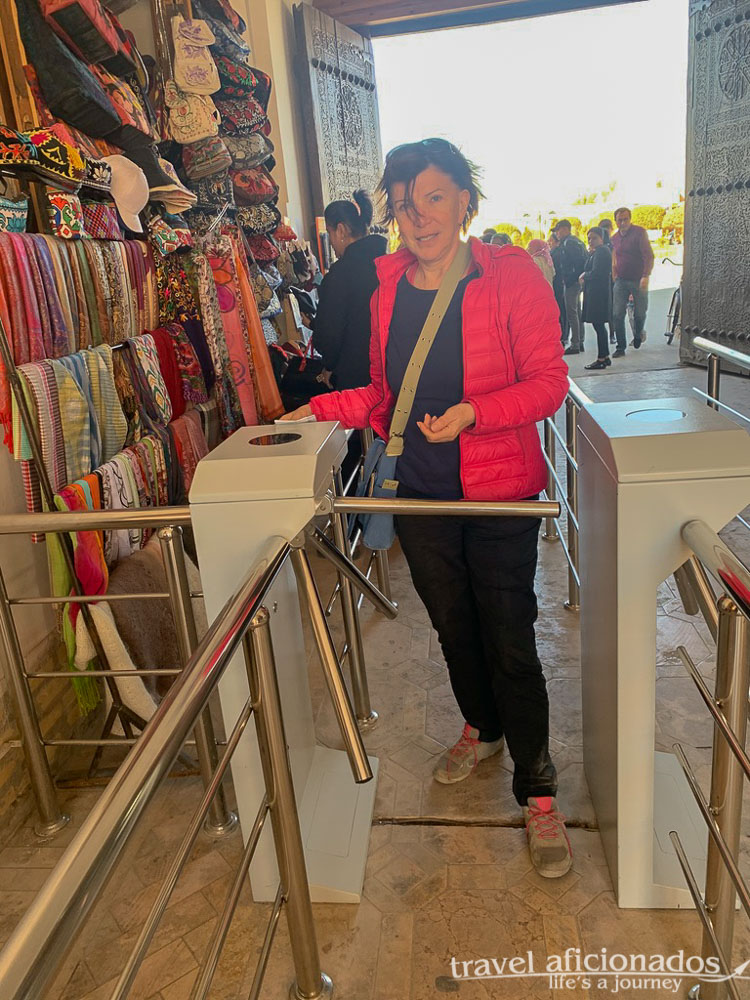